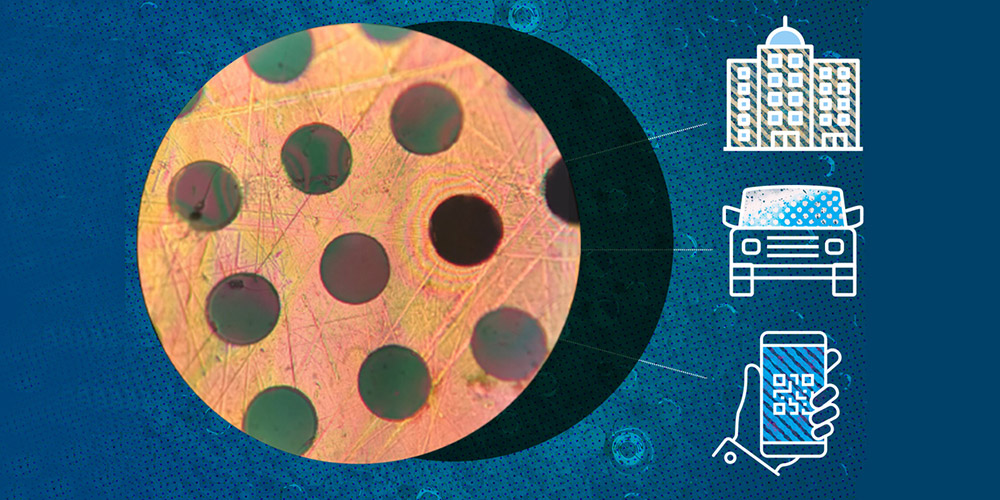 Chemists have created a new type of “super polymer” that is twice as hard as steel, but lightweight and ultra-thin. This is possible because the basic building blocks of this organic material form a two-dimensional network that is only one molecular layer thick. This gives the 2D polymer its unusual properties. They could make it a novel building material, but also enable stable, dense and extremely thin coatings, as the researchers report in “Nature”.

Whether ultra-strong foams, shape-changing metals or an indestructible gel: New materials can make constructions more stable and at the same time lighter or help to save material and energy. Completely new applications are also made possible by such “super materials”. The secret of their special properties usually lies in their molecular structure. In particular, two-dimensional materials such as graphene and similar single-layer lattice interconnects show features that differ significantly from their three-dimensional variants.

In the case of polymers, too, scientists have suspected for some time that they could show even more favorable mechanical properties in a two-dimensional form. Such single-ply plastic materials could combine increased strength and stiffness with the low density and ease of manufacture of regular plastics. So far, however, it has not been possible to produce such two-dimensional polymer films.

The problem: Typically, polymers are made by putting the basic building blocks together and creating the conditions under which they crosslink with each other on their own. However, this makes it difficult to control which alignments these bonds have. “As soon as even one bond arm protrudes from the plane of a polymerizing disk, the 3D structure will grow faster than the desired two-dimensional plane,” explain Yuwen Zeng from the Massachusetts Institute of Technology (MIT) and his colleagues.

Growth in only two directions

But Zeng and his colleagues have now achieved this “impossible” feat. This was made possible because they chose two basic building blocks for their 2D polymer, which favors a planar arrangement of the bonds. “Our hypothesis was that strong amide-aromatic conjugation inhibits out-of-plane bond rotation,” explains the team. What is meant by this is a bond between the functional group -NH2 and a hydrocarbon ring made up of delocalized double bonds.

To meet these conditions, the chemists used pyridine and the nitrogen-containing ring molecule melamine as starting materials. These react with each other in such a way that they form single layers that only grow laterally. “This process occurs spontaneously in solution and we can thus produce sheet-like polymer films in which the molecules are lined up two-dimensionally,” explains senior author Michael Strano from MIT. These two-dimensional networks can loosely connect to each other via hydrogen bonds to form multilayer films.

The crucial question, however, is whether these films made from the 2D polymer also have the desired properties. The research team checked this in practical tests. And indeed: In order to dent the 2DPA-1 material with the tip of an atomic force microscope, you need a pressure of more than 12.7 gigapascals – that’s four to six times better than with bulletproof glass.

The flexural strength of the material is even greater: “2DPA-1 showed a yield strength of 488 megapascals. That is almost twice as much as structural steel, although it is only one-sixth as dense,” the physicists report. And there’s something else: Although the 2D polymer consists of a single-layer, apparently “holey” molecular network, it is impermeable to gases or water.

According to the research team, these properties, which are unusual for a polymer, could open up completely new applications. “You don’t normally think of plastic as something that could be used to support a building,” says Strano. “But completely new things are possible with this material.” The ultra-thin polymer film could be used to provide car parts or mobile phones with a protective coating. The material could also be used as a building material for bridges or other structures.

The production of this novel 2D polymer is also possible on a large scale, as the team reports. Under the right conditions, the molecules practically find themselves together and form the single-layer networks. “So we have planar molecules that can easily be made into a very strong but very thin material,” says Strano. (Nature, 2022; doi: 10.1038 / s41586-021-04296-3)