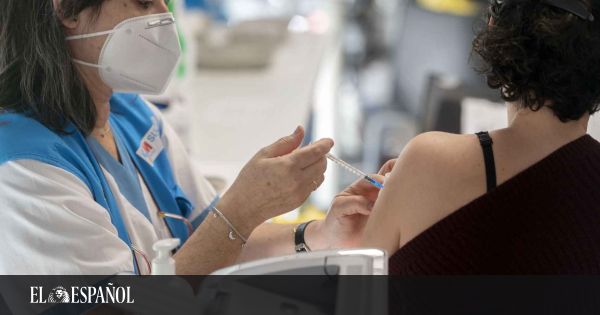 The autonomous communities notified the Ministry of Health this Monday 120,818 new cases of Covid-19, after the 74,368 infections reported on Friday. The total number of positives now rises to 10,395,471 cases since the pandemic began.

Due to technical problems, The Autonomous Community of Madrid could not update its data yesterday, so its cumulative incidence is calculated over 13 days.

Health data for this Monday reflects a drop in infections compared to the previous week. in which 182,123 positives were registered.

Added to this Monday’s report 335 new deaths. Up to 94,570 people with a positive diagnostic test have died since the virus arrived in Spain, up 655 in the last week.

In the meantime, the positivity rate is 31.69 percent, compared to 33.92 percent on Friday. The World Health Organization (WHO) recommends that this number should be below 5 percent to consider the spread of the virus to be “controlled”.

Mask, only in crowds

the mask Except for major events, it will no longer be mandatory from next Thursday outdoors where you stand or when there is no safe distance when you sit, although there always will be recommended to wear it if there are urban agglomerations.

This was agreed this Monday by the Inter-Territorial Council of the National Health System at a meeting where The capacity has also been increased for sporting competitions, including the Football League and ACB Basketball League, rising from 75% to 85% when held in open venues and 50% to 75% when held indoors.

Those numbers will be checked before the end of February, when inter-territorial sources tell Efe they’re confident all publicity can be withdrawn. Some municipalities, such as Madrid and Andalusia, have abstained on this point because they want to remove capacity constraints.

However, the public must continue to comply with non-pharmacological measures such as the use of a mask or social distancing. In this type of situation, like other crowded situations, you need to keep using it when you are standing or when there is no 1.5 meter distance when sitting.

In addition, it will be advisable to wear it when there are urban agglomerations, as set up by the Ministry and practically all municipalities, except for the Basque Country, which, as usual, abstained due to jurisdictional issues.

The conditions for being able to remove the mask outdoors are set out in the royal decree that the Minister of Health will present to the Council of Ministers tomorrow. Carolina Darias, and that it will be published in the BOE on Wednesday so that it can go into effect on Thursday.

Darias already put forward last Friday the executive branch’s intention to abolish the outdoor face mask requirement, a measure the government passed on December 22 for the minimum time needed to try to contain the surge in cases due to the stem the advance of the Omicron variant.

This came at the request of almost all regional leaders, who had called for it at the Conference of Presidents the day before, and that from the start it was a solution questioned by epidemiology and public health experts, who branded it an aesthetic measure of no use, some to curb transmission.

Daria’s ad raised the criticism of many autonomies that although they agreed with the content, they criticized the advancement of the end of the masks just three days after the Congressional confirmation, with which they were reinstated in the open, and without having consulted them beforehand.