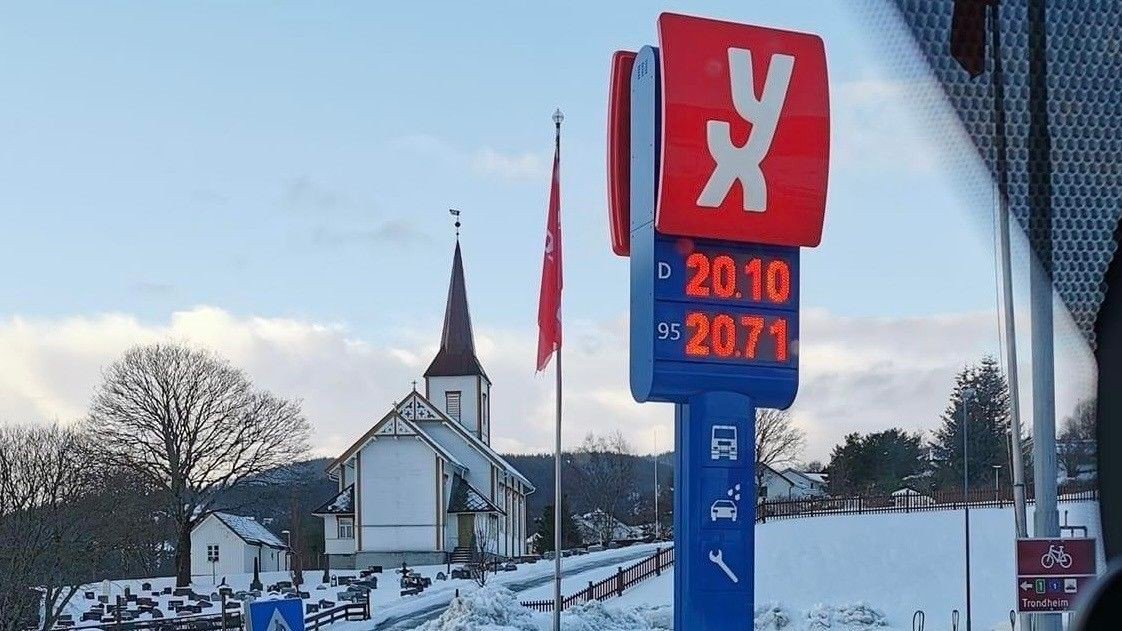 The liter price of 95 octane was already over 20 crowns in several places in the country last year, and Oslo will follow suit in the new year. Even at the unguarded St1 stations, they had to pay well over 20 crowns per liter, not least because of the ever increasing oil prices.

St1 changed just before kl. On Monday 13th the liter price for 95 octane rose from 18.55 kroner to 20.39 kroner when Nettavisen took this picture at the station in Sporveisgata near Bislett. Monday morning is usually a good time to buy gas, The fluctuations throughout the week can be large.

According to communications manager Lillian Aasheim of St1 Norge AS, the highest price in the Oslo area was NOK 20.65 per liter of petrol. It happened on February 1st. St1 Norge AS owns and operates the Shell stations in Norway and uses the Shell brand.

A rule of thumb, according to Kyrre Aamdal in DNB Markets, is that if the price of oil goes up 10 percent, the selling price goes up about a third, 3 percent.

The price of oil is now just above $91 a barrel. If the price of oil is $100 a barrel, which is not unlikely, the selling price in the most expensive outlets will rise to well over NOK 21 per liter for 95 octane.

Roy Steffensen sits on the Progress Party’s finance committee. On Wednesday, during the usual Question Time, he will ask Finance Minister Trygve Slagsvold Vedum whether Vedum agrees that 20 kroner per liter of petrol is too high.

– It was already clear to Frp this fall that this would lead to higher food prices, higher interest rates and higher electricity prices. We have therefore proposed several effective measures to ease the burden on people and reduce petrol and diesel taxes by NOK 3, Steffensen told Nettavisen.

– Unfortunately, our proposals were rejected and in 2022 Workers’ Party / Social Democrats / SV delivered the biggest tax and duty hike in over 20 years, he continues.

VG wrote in March last year that the parliamentary leader Marit Arnstad in the Center Party had presented the future government partner, the Labor Party, with an ultimatum: It was inappropriate to sit in a government where the price of petrol exceeds 20 crowns.

– No. That will not happen. It’s going to be a tough negotiation. The triple CO2 tax and the price of 20 kronor for petrol will destroy the entire legitimacy of climate policy among the Norwegian people. We support the goal of a 50-55 percent cut by 2030. But if you want to achieve that, you have to get people involved, Arnstad said eleven months ago.

Also read: Meter fuel prices: – 90 percent are not affected by us

Finance Committee member Geir Pollestad (Sp) says the offer needs to be seen in a context where the price would rise by several kronor as a result of a sharp hike in the carbon tax.

– It is the market that has now increased the price of petrol, not the government. We don’t want to tie our participation in government to market prices, but we politicians can do something about taxes.

– That is why we lowered the road toll so that the price of petrol at the pump was 0.22 crowns per liter lower than if the proposal of the Solberg government had been accepted.

When asked whether the Center Party can guarantee that there will be lower petroleum taxes in the future, Pollestad replies:

– The government platform declares that we will lower these taxes, that is the basis. In the first budget presented by this government, we reduced part of the Solberg government’s tax increase.

– In the coming years it is important to keep fuel taxes lower than today.

Steffensen believes that anyone who believed that Vedum and the Center Party would fight for lower gas prices has every reason to feel betrayed. Steffensen claims that even before the negotiations with the SV, they had proposed increasing the mineral oil tax.

Sp didn’t fight, she gave up even before the negotiations with SV. Now they have shown the SV the little finger. The FRP politician predicts that fuel taxes will be even higher during negotiations in the coming years.

Pollestad denies any cheating. He believes Steffensen himself should have a guilty conscience after then Finance Minister Siv Jensen increased the total fees by 6.3 billion during her tenure.

Also read: The price of petrol is approaching the 20 crown mark – so prices are now skyrocketing

– Those who got pretty big reliefs were those who bought new electric cars. I think we deserve to get away from the game Steffensen is playing.

– He should be happy that the government is not raising taxes as much as his own government. The goal is to cut fuel taxes and lower the price of gasoline, he reiterates.

Pollestad says neither the current nor the previous government discussed taxes being affected by how high the price of oil is.

– It’s the pump price that people notice, and it fluctuates up and down as to whether the price of oil is high or low. But again, it is us politicians who set the tax, and the government statement says they are going in a new direction.

– Then FRP expects the Labour/SP government to deliver tax breaks as SP promised voters ahead of the election.

As for the government’s cuts, Steffensen says they were compared to a proposal that would not get a majority.

Lillian Aasheim writes in an email to Nettavisen that in the first few months of the year they have seen a sharp increase in purchase prices for ready-refined petrol and diesel.

This set price records both in Oslo and in other parts of the country. Aasheim points out that fuel prices are made up of three different parts:

According to Aasheim, about 60 percent of the price is government taxes and fees. The purchase price for finished products is about 30 percent, while the last 10 percent helps cover the costs associated with storage, distribution and operation of the service station network, according to Aasheim.

“Based on this and local competition in the market, we set our prices throughout the week,” writes Aasheim.

Aasheim believes there are complex reasons why the price of finished refined products is complex. The high demand, the price of crude oil and generally high energy prices make refining more expensive.

The price of oil (a barrel of North Sea oil) has risen from around $40 a barrel to over $90 since the change of month October/November 2020.

The mineral oil companies also mix in a proportion of biofuels, the price of which, according to Aasheim, has recently also risen.