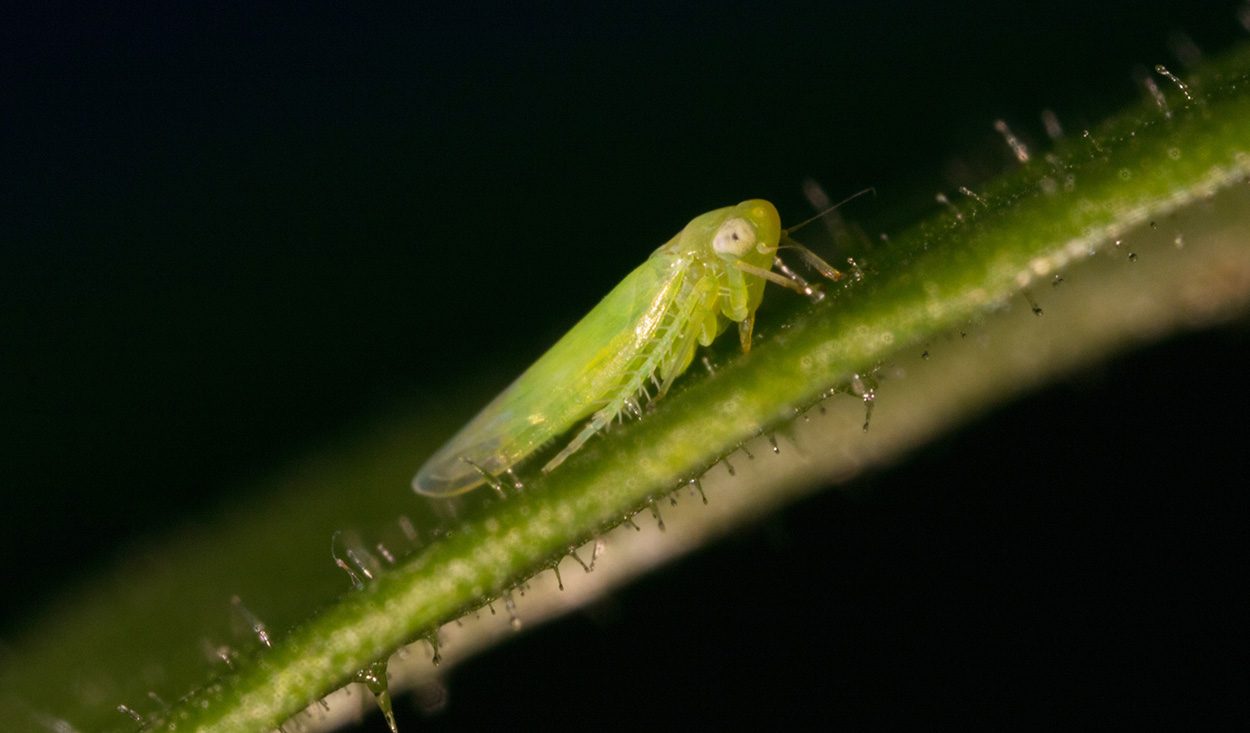 Researchers have unveiled a mechanism by which America’s native coyote tobacco protects itself from leafhoppers. Using field studies and genetic analysis, they identified a previously unknown chemical that the plant secretes to get rid of the sap-sucking insects. After the researchers had decoded the metabolic pathways responsible for this, they succeeded in transferring them to tomato and bean plants, which then also became resistant to cicadas.

If a plant is threatened by predators, in many cases it is not at their mercy. Plants such as tomatoes, corn and tobacco defend themselves against pests with a chemical defense program: as soon as they register damage to their leaves caused by feeding, a signal cascade occurs which, depending on the plant, leads to it producing more toxins or releasing scents that either scare away the pests or lure their predators to the infested plant. The plant hormone jasmonic acid plays a role in this. In many cases, however, the precise mechanisms are not yet known.

A team led by Yuechen Bai from the Max Planck Institute for Chemical Ecology in Jena has now investigated in detail how coyote tobacco (Nicotiana attenuata) defends itself against cicadas. In the homeland of coyote tobacco in the American Southwest, some of the plants are regularly attacked by cicadas, which feed on the plant’s sap, causing severe damage. Others, however, appear to be resistant to the pest. The researchers had already shown in earlier studies that cicadas prefer to colonize plants in which the jasmonic acid signaling pathway is weak. “However, at that time it was still unknown which specific defense mechanisms triggered by jasmonic acid are responsible for resistance to the cicadas,” explains co-author Dapeng Li from the University of Strasbourg.

In order to track down the mechanisms, the researchers crossed 26 parent plants, which reproduce a large part of the naturally occurring genetic variation, according to a defined scheme. They planted the plants grown in this way in their natural range in Arizona and observed the extent to which they were attacked by cicadas. Based on the severity of the infestation, they were able to deduce which genetic basis contributes to resistance.

In addition, they analyzed which chemical changes are triggered in the plants by contact with sucking cicadas and which genes are activated. In doing so, they came across a previously unknown chemical substance, which they gave the name CPH. In order to find out whether this actually serves to protect against pests, they fed some cicadas in the laboratory with a sugar solution to which they had added CPH – and indeed: the substance killed the cicadas within a few hours. In order to find out which metabolic pathways are involved in the production of CPH, Bai and his colleagues modified specific genes in some plants that are important for signal transmission in the defense reaction.

In this way, they discovered that the synthesis of CPH is based on the interaction of three different metabolic pathways, one of which is activated by jasmonic acid. “By combining sophisticated molecular biological and chemical-analytical methods, we were not only able to identify and characterize a previously unknown antibody, but also the genes responsible for its formation,” says Bai’s colleague Ian Baldwin. With this knowledge, the researchers were able to activate corresponding genes in other plants as well: in the field bean Vicia faba and the wild tomato species Solanum chilense. In fact, these plants then produced CPH and became resistant to planthoppers.

“You can call our approach ‘forward genetics guided by natural history,'” says Baldwin. “Natural history and observation of cicadas feeding behavior fueled the discovery process. Because when it comes to chemistry, nature remains the best inventor.” With the help of synthetic biology, it is feasible to transfer natural innovations, which have arisen through natural selection over millions of years, to crops. “This enables a more environmentally friendly and ecologically differentiated revolution in crop protection,” the researchers write. This is necessary, especially in view of climate change, which favors the proliferation of pests such as cicadas. “CPH represents a chemical innovation that enables a native plant to cope with pests and is easily incorporated into crops,” say the researchers.