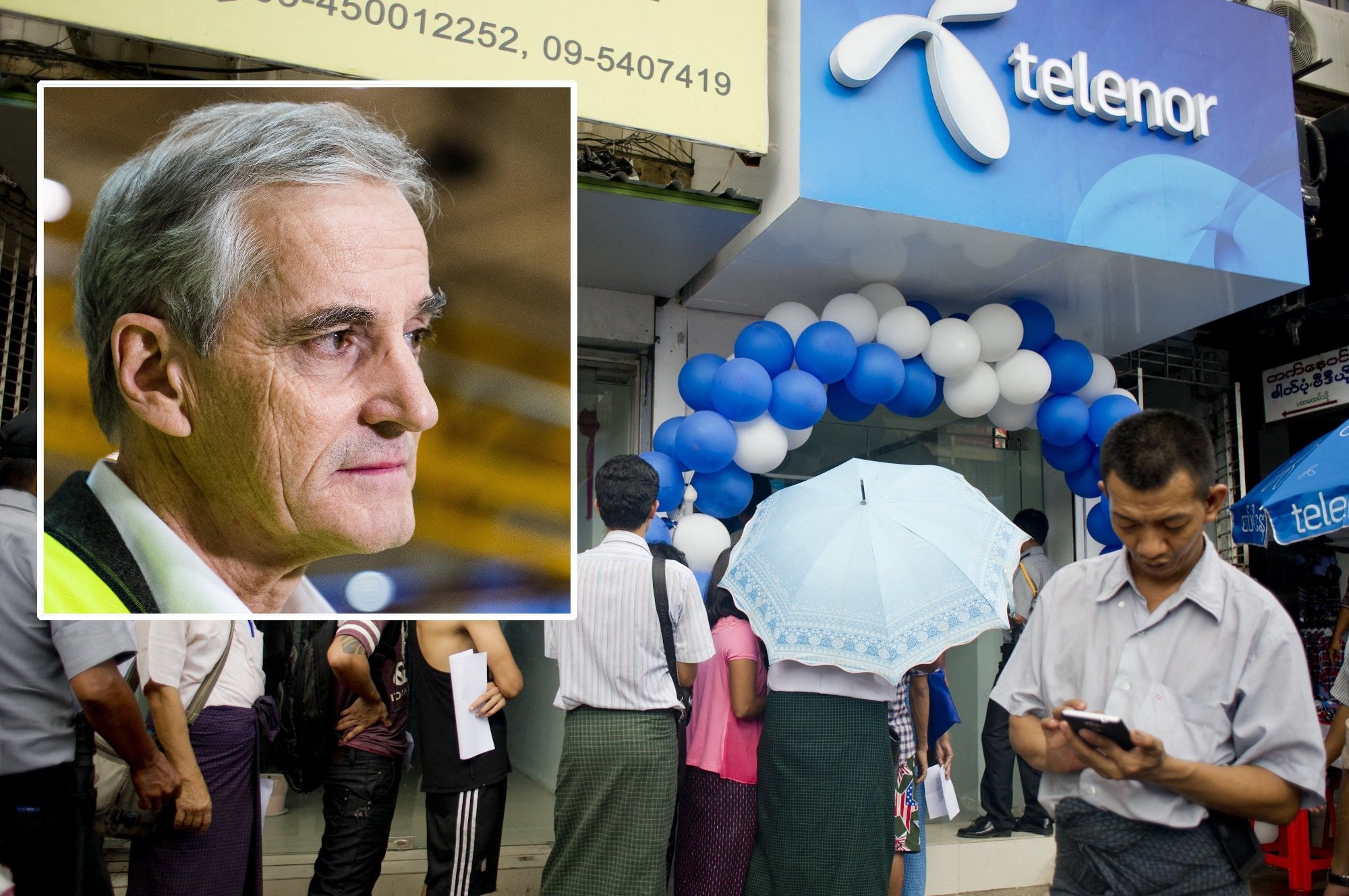 Exactly one year has passed since the military coup in Myanmar on Tuesday. The putschists have acted ruthlessly and brutally against any resistance from activists, human rights activists and democracy activists. Over a thousand civilians have been killed and thousands arrested since the military junta seized power on February 1, 2021.

Telenor established a subsidiary in Myanmar in 2014. After the coup, Telenor decided to withdraw from the country. Norwegian mobile phone company Telenor Myanmar is therefore being sold for NOK 900 million to controversial, blacklisted company M1 Group, which is said to be working closely with the junta.

Also read: Telenor is selling its half of the Myanmar company

Activists fear sensitive user data about Telenor’s 18 million mobile subscribers in Myanmar will be handed over to the junta once the sale receives regulatory approval from the country’s new authorities.

According to the Telenor annual report 2020, the Norwegian state is the main shareholder of Telenor with a stake of 53.97 percent. Several hundred civil rights organizations in Myanmar have previously urged Telenor to halt its sale to M1 Group. Critics have previously urged the government to exercise active ownership to stop the sale.

Requires Støre to come onto the field

Now 168 Burmese civil rights organizations are calling on Prime Minister Jonas Gahr Støre to intervene in the process and stop the controversial sale.

“In the period before Telenor was licensed to operate mobile phones in Myanmar, you were Minister of Foreign Affairs in Norway. Together with Telenor’s CEO, you traveled to Myanmar to promote Telenor and Norwegian industry, and ties between the two countries became even closer when Telenor received the telecom operator license shortly thereafter,” read a letter to Prime Minister Støre .

The letter is signed by the Center for Research on Multinational Corporations (SOMO) and the Forum for Development and the Environment, who wrote and sent the letter on behalf of civil society in Myanmar.

– Human rights defenders and activists are now even more concerned than before that user data collected by Telenor Myanmar from its 18 million mobile phone subscribers will fall into the hands of actors who are cooperating with the violent regime and empowering the junta to go after them specifically, says Joseph Wilde-Ramsing, senior researcher at SOMO, on Nettavisen.

Also read: Terrible massacre in Myanmar: villagers are said to have been attacked by government troops

Wilde-Ramsing fears that the sale could be formalized at any time.

– It is really urgent to stop this sale. It is very likely that the user data would be passed on to harmful parties, he says.

Støre visited Myanmar in January 2012 with a delegation from Telenor, LO and NHO.

– Myanmar is a country of great opportunities. At the same time, however, there was a great risk associated with corruption, a lack of transparency and weak legislation, said then Foreign Minister Støre NTB this time.

“We ask the Prime Minister of Norway to respond to Norway’s condemnation of the coup and we urge the government to halt the sale before it is too late,” the request reads.

“As the new Prime Minister of Norway, you have the power to show leadership and reverse the damaging sales, and also to prove to the outside world and the pro-democracy movement in Myanmar that Norway and Telenor are as noble as you actively promoted as foreign minister and supported.” the establishment of Telenor in Myanmar ten years ago,” the letter reads.

Also read: The Minister for Trade and Industry on the Telenor case: – An extreme example of the dilemmas that can arise

– Do you think Prime Minister Støre should feel obliged to intervene in this matter, Wilde-Ramsing?

– I hope he does, and especially considering his role as Foreign Minister ten years ago promoting Telenor in Myanmar and encouraging and facilitating the establishment of the company. Both the Norwegian government and Telenor must have been aware of the likely danger that something like this would happen (military coup, ed.) and should therefore have been better prepared. It would be naïve to think that this could not happen. And that triggers a moral obligation under international human rights standards to step up, intervene in the sales process and act, he says.

– Must acknowledge that this is not a normal situation

The signals from the previous government were that despite the fact that the state is the main shareholder, Telenor’s board and management are responsible for running the company and that it is the company that is best placed to account for the considerations in this situation .

SOMO nonetheless believes that the exceptional situation requires the Prime Minister to come on board.

– I call on the Prime Minister to take this matter as seriously as it deserves and to recognize that this is not a normal situation. Under normal circumstances, it would be natural for a government to stay in the background. But when we talk here about the risk of serious human rights violations, including murder and torture, for mobile phone customers who are put at risk by a Norwegian semi-state company, I think that this requires really exceptional government action, says Wilde – ramming.

– I really hope that the prime minister finally realizes that it is high time for the Norwegian government to take responsibility and rise to the level of human rights standards they so often say they have, he says.

Also read: Handles complaints against Telenor: – This may result in arbitration

Last fall, SOMO, on behalf of 474 civil society organizations in Myanmar, filed a complaint against Telenor with the Responsible Business Contact Point, which works to promote the OECD guidelines for multinational companies.

“Although six months have passed, nothing has happened,” says Wilde-Ramsing.

However, Telenor confirms to Nettavisen that the company was willing to enter into a dialogue with its counterparty.

– Yes, we are in dialogue and have expressed a willingness to engage in dialogue with the complainants, Telenor communications director Gry Rohde Nordhus tells Nettavisen.

– What is the status of the sale?

– We are still awaiting regulatory approval for the sale to M1 Group, says Nordhus.

Experts Nettavisen spoke to previously have stated that the military junta can easily misuse Telenor Myanmar’s mobile data Map networks and movements to the regime’s critics, unleashing all opposition and possibly putting lives at risk.

– What are the possible consequences if user data of Telenor Myanmar customers falls into the wrong hands, Wilde-Ramsing?

– A big problem is that we don’t know exactly what kind of data we are talking about, since Telenor didn’t want to disclose exactly what kind of data can be passed. This is not about recording phone calls. But the fear and expectation is that the data will contain the call history that the junta can use to identify activists. When they get an activist’s call log, they can use it to target an entire network of activists and their families. The activists’ biggest concern is that their entire network will be exposed, says Wilde-Ramsing.

– How many activists, human rights defenders and democracy activists do you think are at risk of “identity disclosure” and who have not yet been identified if the junta obtains Telenor Myanmar cellphone data?

– I would say that there are thousands, maybe even tens of thousands, of activists working at different levels. What we do know is that mainly all Myanmar activists have joined the Telenor Myanmar subscription, says Wilde-Ramsing.

Telenor has not yet made a commitment The online newspaper that the new owners of Telenor Myanmar take over user data about the time and place of the call.

Asks questions to the Minister for Trade and Industry

Storting representative Tage Pettersen (H) was also involved in the sale of Telenor Myanmar and hired a written question to Trade and Industry Minister Jan Christian Vestre (Labour Party) on Monday this week. The Department of Trade and Industry, with the responsible minister, administers state ownership of Telenor.

The Storting representative asks, among other things, what dialogue there has been and what guidelines the Ministry of Telenor has given regarding the sale of Telenor Myanmar and whether the Ministry has asked Telenor to wait with the sale until a decision is made by the OECD contact point .

– My starting point is that it is the one-year anniversary of the military coup and that makes it easier to put the issue on the agenda. This is a very important issue that deserves to be addressed, Pettersen tells Nettavisen.

– Another starting point is the processing of these 474 complaints from civil rights organizations to the OECD contact point in Norway. It’s interesting to hear what the ministry thinks about this process in parallel with dealing with these complaints, he says.

Also read: Deposed minister with strong appeal to Norway and Telenor: – We trusted you

– What do you think the state should do as the main shareholder, Pettersen?

– I think I should be careful when thinking about what should be done. But I think Hanne Sophie Greve has some relevant issues that she raises in relation to human rights. These aspects are relevant regardless of whether Telenor sold or stayed in Myanmar, says Pettersen.

This was recently explained by the human rights expert Hanne Sophie Greve Today’s business that a controlled freeze on sales would demonstrate that the Norwegian government takes human rights work seriously, while failure by the government to act could tarnish Norway’s reputation as a champion of peace and human rights.

She also points out that Norway currently sits on the UN Security Council as a rolling member with the intention of upholding fundamental human rights.

– I don’t have an answer, and I don’t think the Minister for Trade and Industry does either. But it is important to address these issues in order to bring as many voices to light as possible. This is also relevant as Norway sits on the UN Security Council. There is something symbolic about this situation, says Pettersen.