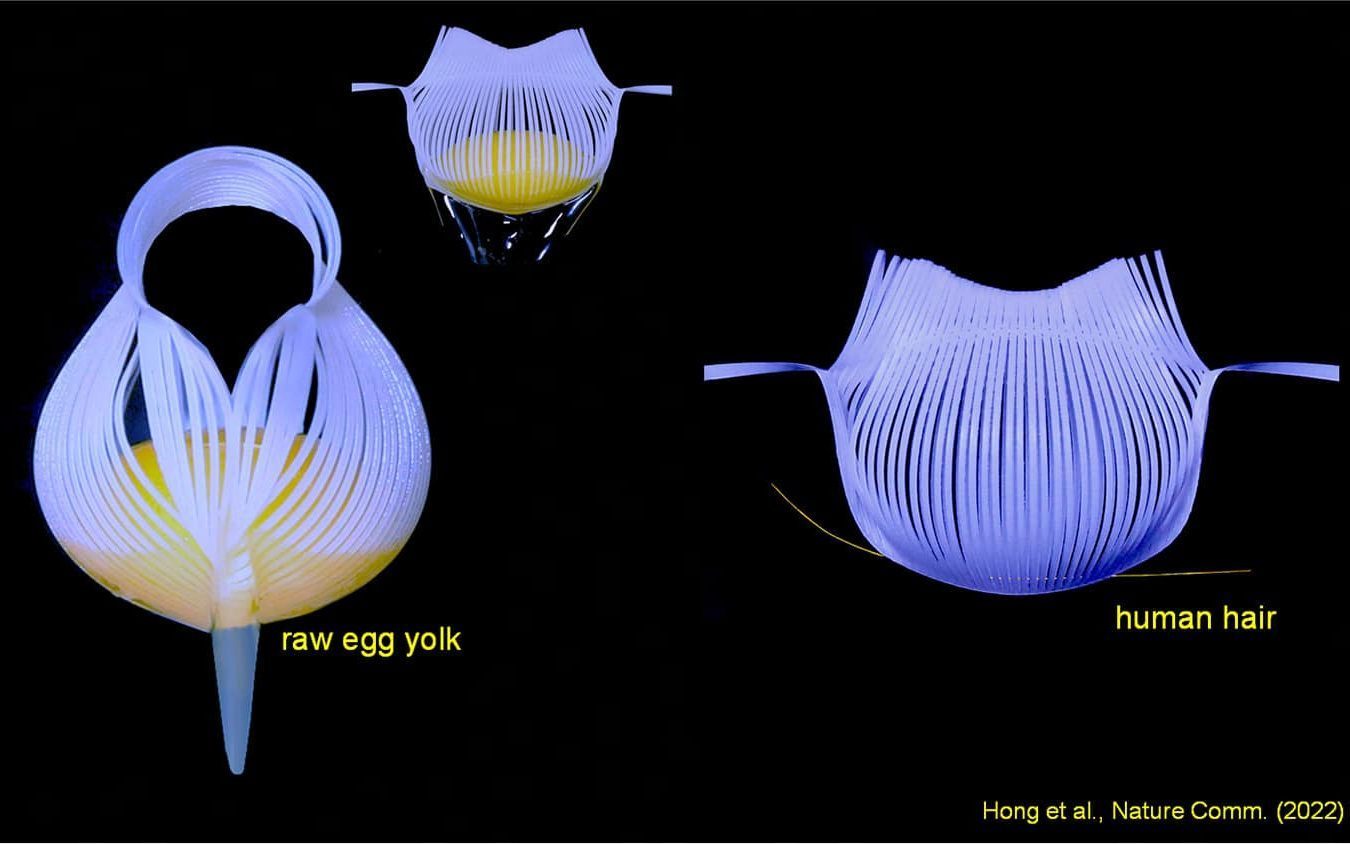 Sophisticated flexibility: Researchers have developed robotic grippers that can lift extremely sensitive items non-destructively or precisely grasp a hair. The concept is based on the principles of the Japanese art of paper cutting, kirigami, in which two-dimensional sheets of material are provided with cutting patterns in order to form specific three-dimensional shapes through pulling movements. According to the researchers, the system offers potential uses in soft robotics and biomedical engineering.

If you are not extremely careful, you will quickly damage very sensitive objects or be unable to grasp delicate objects. The pronounced instinct is one of the most important human talents. Transferring these skills to robotic systems poses a major challenge for technology. It has been possible to produce fine-motor robo-hands from soft materials that can handle fruit gently, for example. So far, however, sensitivity has hardly been taken to the extreme: Robot grippers cannot grasp something as sensitive as an egg yolk without destroying it. But that could change thanks to developments by a team of researchers at North Carolina State University in Raleigh.

The scientists are inspired in their work by the Japanese art of kirigami. In contrast to the more well-known origami, this technique not only uses folds but also cuts to transform flat material into complex 3D objects. A well-known variation of the paper cutting art are the so-called pop-ups – animals, buildings and other structures that appear when you open a map or a book. The scientists adapted this concept for technical use.

2D foils made of different plastics are provided with sophisticated slit structures by laser cutters in order to create useful 3D structures through movements. The later form is primarily determined by the outer limits of the material. For example, a 2D material with a circular boundary results in a 3D spherical structure. In the current study, the researchers are now presenting a new calculation system that makes the development of cutting patterns much easier and can lead to sophisticated results.

“Our technique is significantly simpler than previous techniques for converting 2D materials into curved 3D structures and allows designers to create a variety of custom structures from different 2D materials,” says senior author Jie Yin. His colleague Yaoye Hong continues: “We have developed a model that allows users to work backwards: if users know what kind of curved 3D structure they need, our approach allows them to define the shape of the boundaries and the pattern of the slits they need to use in the 2D material,” explains the scientist.

To demonstrate the potential of their technique, the team created a nifty kirigami gripper that can be operated by a robot. “We wanted to show that our concept can be used to produce tools that can grip and move even extremely sensitive objects,” says Yin. The gripper is created using a specific pattern that is cut into a two-dimensional material made of flexible plastic. The result has appendages on the side that trigger a shaping effect when subjected to a tensile load: a bag-like structure is created with a precisely closing beak opening. When the system relaxes, it opens again.

“Traditional grippers grip an object tightly – they grab things by applying pressure to them,” says Yin. “This can cause problems when trying to grasp fragile objects like an egg yolk or a living thing. But our grippers can gently enclose an object and then lift it – similar to how we would wrap our hands around an object.” The scientists demonstrated this by using the gripper to lift a raw egg yolk, transfer a fish or transport soap bubbles.

Potential for robotics and medicine

The developers documented that the concept can even assume a kind of tweezer function by grasping a human hair with the gripper. However, as they point out, many other applications of the concept are possible. In addition to soft robotics, they see medical technology as an important field. As part of their study, they are already presenting a prototype for a cleverly adaptable knee warmer. “Imagine smart bandages or monitoring devices that can flex and move optimally with your knee or elbow,” says Yin.

Researchers will continue to work on such applications. “Through our proof-of-concept study, we have shown that our technology works. We are now busy integrating them into soft-robotics technologies to address industrial challenges, and also working on therapeutic applications,” Yin said. “We are also open to working with partners from industry to explore further applications and find ways to transfer this approach from the laboratory to practice,” concludes the scientist.