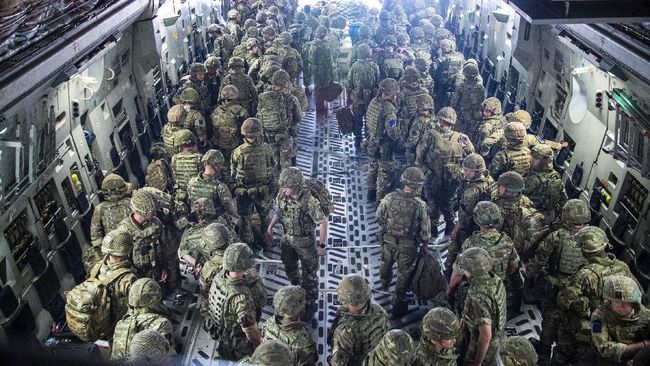 English prepares to send help Then in the form of the deployment of armed forces, weapons, warships and jets in Europe.

British Prime Minister Boris Johnson announced on Saturday (29 January) the preparations in response to the increasing tensions between Russia and Ukraine.

The offer, which will be made to senior NATO military officials next week, includes the addition of some 1,150 British troops currently in eastern European countries and additional defensive weapons to be sent to Estonia.

“This package will send a clear message to the Kremlin that we will not tolerate their destabilizing activities and will always support our NATO allies in the face of Russian hostility,” Johnson said in a statement late Saturday.

“I have ordered that our forces are ready to deploy across Europe next week. We are sure to support our NATO allies on land, sea and air,” he added.

The British leader said if Russian President Vladimir Putin chose “bloodbath and destruction” in Ukraine, it would be a “tragedy for Europe”.

“Ukraine should be free to choose its own future,” he said.

Johnson, who has been under intense political pressure for weeks after a spate of scandals, said he would speak to Putin in the coming days to urge a de-escalation on Ukraine on Friday.

Relations between Russia and the West are at their lowest point since the Cold War after Moscow stationed tens of thousands of troops on the Ukrainian border.

To date, the UK has deployed more than 900 troops to Estonia and more than 100 are currently in Ukraine as part of a training mission that began in 2015.

Meanwhile, a British light cavalry squadron of about 150 personnel was deployed in Poland.

British Defense Staff Tony Radakin said he would brief Cabinet on the situation in Ukraine. Including an explanation of the possible use of aircraft, warships, military specialists and troops and weapons that will strengthen NATO’s defences.

“Supports UK support for Nordic and Baltic partners,” according to Johnson’s office.

On the other hand, the warship HMS Prince of Wales, currently in the High North region of Arctic Europe and in command of the Nato Maritime High Readiness Force, is on alert.

“You are asked to improve relations with President Putin’s government and to urge de-escalation,” the presidential office said.

Wallace will also travel next week to meet allies in Hungary, Slovenia and Croatia.

Tensions between Russia and Ukraine have escalated since Moscow has been accused of preparing an impending invasion of the former Soviet Union.

Russia is said to have stationed more than 127,000 troops on the Ukrainian border. Russia is also said to have sent more military equipment to the border.

In fact, the US and other European countries have issued strong ultimatums about severe consequences and sanctions if Russian President Vladimir Putin continues to launch an invasion of Ukraine.

In December, US intelligence estimated that Russia would attack Ukraine in early 2022.