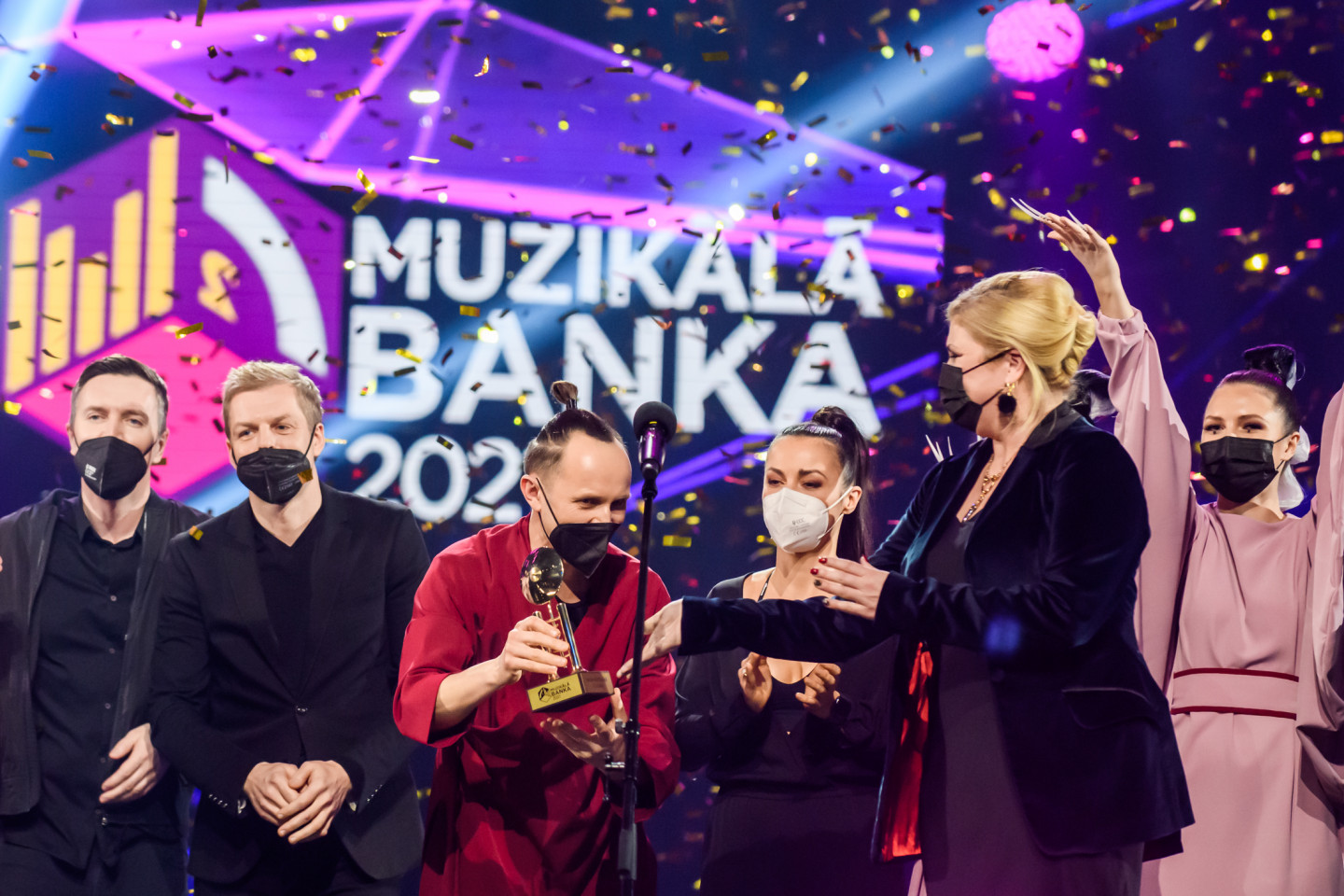 Everything tested, masked and disinfected

In order to physically reach the “Musical Bank” finals in Daugavpils, various covert barriers had to be overcome – a vaccination or illness certificate and an antigen self-test before departure (media) or on site (for the creatives and service team), but then – Masks, seating restrictions, strict backstage regulations etc. etc. but of course this is nothing new as music venues have been in this mode for a couple of years.

“Epidemiological safety requirements and distance rules during the rehearsals, rehearsals and filming of the Musikbank 2021”, which were printed on three A4 pages and consisted of 17 points, were also distributed on site. The recording company disinfects the microphones after each use “,” Musicians come to the event with their personal musical instruments, except for the drum kit, and they are not shared “,” Percussionists use individual drumsticks, but the drum kit is disinfected after each use “etc. Miraculously, this testing and re-testing did not lead to a natural collapse, and the organizers were able to “just shake hands with the sick somewhere [oficiālajā statistikā] occurs ?! “. Behind the scenes, this disguise and breathing led to many situations where people in the music community got together and said, “I don’t know!” Uncomfortable things couldn’t spoil anyway.

Ivo Fominu is selected as a martyr in battle mode

However, one of the “fallen” was Ivo Fomins, who fell under paragraph No. 3, which “prevents the presence of people showing signs of respiratory infections”. The event’s executive producer, Aigars Dinsbergs, said he immediately informed the singer that he would not be admitted to the Olympic Center with a cold and sore throat, which is why the video version played the obviously hoarse Ivo.

When they saw the Fomina audience at the very end of the voting sub-goal, those in Daugavpils joked that next year it would be better not to go to the event at all because the audience was completely satisfied with the clip, but they didn’t know what was happening on social media back then. It turned out that the singers had chosen the singer as their flag (although he was vaccinated) and with the slogans “stupid government, a person should not even go to greet his colleagues” to vote for the song “You are me”. While Ivo’s songs are almost always in the top 6 in “Muzikālā banka”, nobody will know if it would have been this time without the participation of posthumous people. It is interesting that Ivo’s career has already played a major role: in 2004, together with Thomas Klein and “Song for Happiness”, he won first place in the national selection of the Eurovision Song Contest, thanks in no small part to the fact that the event director began live from the stage, for the heroic efforts of his “congested” throat and his medics to bring the singer’s voice back to life, causing the audience to feel sorry for the sufferer. This time there was no mention that Fomin was simply ill, but the conspiracy theory supporters were stained.

In the overall voting, 50% of the scoring was a live vote, while the other half of the jury and first round voting was in the proportions of 25%:25%. If only the panel of experts judged it, the song “Signature” from the group “Instruments” would take first place, Dona “It is written in the sky (Milky Way)” would take second place and Aminata with “Salt Eyes” would take the take third place. In addition to the already mentioned Fomina, the energetic and “roof-breaking” performance of the group “Other Boys” also delighted the live broadcasts, which in the overall rankings even Don, a standout member of the “Music Bank”, eagerly await what they will see in a week will point to “Supernova” in the semifinals. Incidentally, Jānis Pētersons, the singer of “Other Boys”, coped quite well with the event manager’s reins, only one man – the script of the comedian, “Singapore Satin” musician Edgars Bāliņš – needs to be read from the stage by someone who understands his thoughts, the intonation of the text should be increased where a pause is required, which should be given special emphasis as a joke, etc.

As for the results – the viewer’s predictions came true: if “Brainstorm” performs conspicuously with “Daughters” (and it did), they will be the main favorites. The musicians themselves – the performers of the 15 most valuable songs of the final show – put “Where the Sleigh of God Glides” in first place. For a long time after the award ceremony, the large ensemble of musicians could not be seen from the stage, where they greeted each other and the others, but in the backstage without an entry in the calendar. Daugavpils Mayor Andrejs Elksniņš also caught Renārs Kaupers and Jānis Jubalts behind the scenes trying to find out if Daugavpils was included in the group’s list of concert schedules for that year. That may be, but the ‘thinkers’ won’t be reporting on the 2022 tour until March at the earliest.

Together with the “Brainstorm”, the association “Tautumeitas” this time entered the stage from a completely unusual perspective, and this was not only due to the stage design of the girls, created by the artist Līva Drešere, which shockingly long dominated nails. Earlier the union officially shrank from six girls to five last year, but this time there were only four “girls” in Daugavpils – who is to blame? A closer look revealed that the club was formed according to the mathematical principle “5 – 2 + 1 = 4″, d in Brussels) were not in the ranks this time, but the very strong, convincing and experienced Gabriela Zvaigznīte has the ” People’s Daughters” who got to know the general public after joining the “Radio Trio” – it’s a significant addition indeed!

Akurāt, today January 31st, “Tautumeitas” go to the recording studio to see their new album which will be released on February 28th and the band’s new single recorded with Renārs Kaupers will be released on the same day . According to Asnate Rancāne, leader of “Tautumeitu”, the collaboration between the two groups began “through a meeting in “Hurricanes,” through Latgalian songs, through shared vibrations,” when “creative flights began to emerge—” and to us with them ” and“ because we have developed a deep, close friendship based on shared values”. The song “Where God’s Sleigh Slides” immediately fell into the hearts of the girls. This wasn’t the first song Brainstorm sent us – they sent us a song first and asked if we could feel it and if we could hear ourselves in it. It was the second song we sent each other, but it was our best song. We listened and got it – finally! Finally a song for us! It was very, very enjoyable,” Asnate still admires when he recalls it. To win the election, “Tautumeitas” did not forecast what percentage of the voters would have supported them, but what contribution the “Brainstorm” fan army made. “It seems to me it’s not measurable, we’re so cool together – like in the craft! It wasn’t that half and half are whole – no! The rule here was: healthy with healthy is healthy! Together it was a cosmic energetic explosion that we didn’t even feel in rehearsal but felt in that final performance. When we came off the stage, a lot of people came and said it wasn’t just a show or a show, it was something magical!” Complementing each other, all four “daughters” tried to formulate their emotional range after the win.