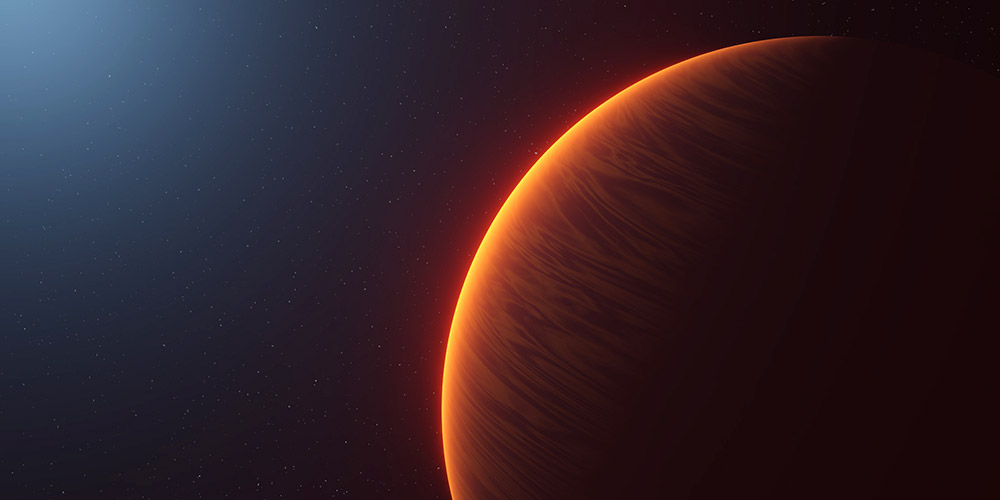 Complex Shell: Astronomers have detected for the first time a complex, possibly layered, atmosphere on an exoplanet. Accordingly, abnormalities in the light spectrum of the hot gas giant WASP-189b indicate a gas envelope with regionally different compositions. The extremely hot planet could also have a UV protective layer of gaseous titanium oxide, as the team reports in the journal Nature Astronomy.

Earth and some other planets in the solar system have a complex, layered atmosphere. However, what the gas shells of extrasolar planets look like is still largely unexplored – the resolution of the telescopes was not sufficient. Individual components could only be identified from a few hot gas giants, including gaseous metals, hydrogen cyanide gas or clouds of corundum.

A team led by Bibiana Prinoth from the University of Lund in Sweden has now managed to take a closer look. They studied hot Jupiter WASP-189b with the CHEOPS space telescope and the HARPS instrument at the La Sila Observatory in Chile. Located 322 light-years from us, gas giant WASP-198b orbits its star very closely and is therefore so hot that it is self-illuminating. It also follows a 90 degree tilted polar orbit around the star.

The highlight, however, is that the planet has a fixed rotation and therefore always faces the same side of its star. “However, our perspective varies substantially from the beginning to the end of the transit,” say the astronomers. As the planet passes in front of the star, you see a little more of the morning side, then the evening side. This makes it possible to use the light spectrum to determine whether there are regional or daily differences in the composition of the gas envelope.

And indeed: “In our analysis, we saw that the fingerprints of the various gases were slightly different from what we expected,” reports Prinoth. The spectral signatures of gaseous metals such as iron, chromium, manganese, titanium, vanadium and nickel were generally detectable. However, some spectral lines were shifted significantly more into the blue than they should be due to the planetary rotation alone. “These shifts also do not match between the different elements,” explains the team.

According to the astronomers, this indicates that the atmosphere of WASP-189b is not the same everywhere and that there are dynamic processes in it: “We think that strong winds and other processes could cause these changes,” explains Prinoth. These winds could be triggered by the fact that the day side is a good 3,200 degrees hot, but the night side is significantly cooler.

But that’s not all: the spectral signatures of the different elements are not all blue-shifted in the same way. The effect is very pronounced with magnesium and chromium, but not detectable with titanium and titanium oxide, as the analyzes showed. “Since the fingerprints of the different gases have been modified in different ways, we think this indicates that they occur in different layers,” says Prinoth’s colleague Jens Hoeijmakers.

If confirmed, it would be the first evidence of such a stratified atmosphere around an exoplanet. “In the past, astronomers have often assumed that the atmospheres of exoplanets exist as a unified layer and have tried to understand them as such,” says Hoeijmakers. “However, our results show that the atmospheres of intensively irradiated gas giant planets also have complex three-dimensional structures.”

The new study also provides more information about a special component of the gas envelope of hot Jupiters: titanium oxide. “Titanium oxide absorbs short-wave radiation, such as ultraviolet radiation,” explains co-author Kevin Heng from the University of Bern. There have long been indications that this molecule could be present in the hot atmospheres of such gas giants. “However, previous observations had only low resolution, making it difficult to distinguish from other UV absorbers and systematic interference effects,” the team writes.

However, the high-resolution spectral analyzes by CHEOPS and HARPS now clearly show that the gas envelope of WASP-189b contains titanium oxide. “His discovery could point to a layer in WASP-189b’s atmosphere that interacts with stellar radiation similar to the ozone layer on Earth,” explains Heng. (Nature Astronomy, 2022; doi: 10.1038 / s41550-021-01581-z)