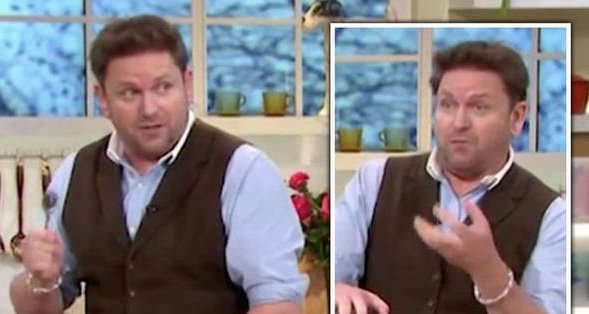 Jakob Martin joined Holly Willoughby and Philipp Schofield by doing This morning kitchen last week. the ITV The chef, known for his savory recipes, prepared a wintry Caesar salad for presenters and viewers at home. As the host prepared the dish on Saturday morning, he revealed his allergy to mayonnaise.

The TV chef is known for his comforting recipes and his love of butter.

However, on a recent episode of This Morning, James decided to share his take on the classic Caesar salad.

As James prepared the dish, Holly joked, “It’s not a salad, is it?”

Continue reading: ‘Looks like an ad**head’ James Martin shares his embarrassment with the car

After putting the chicken dish in the oven, the TV chef tackled the mayonnaise.

He explained: “More on to the mayonnaise, really easy to make your own mayonnaise.

“I’m allergic to mayonnaise, so I have to make my own mayonnaise.”

“Are you?” Holly asked before Phillip added, “What are you allergic to?”

James replied, “It’s an acid they have in mayonnaise and kiwifruit.”

“I’m really badly allergic to it,” James continued. “So I make my own.”

“The yolk gives way [mayonnaise] its color,” he commented.

“You basically mix that together, now it’s really easy, once you learn to make your own mayonnaise it’s very easy.”

Holly asked: “How long does it last?”

The TV chef revealed that the homemade sauce should last “a couple of weeks”.

“It’s made the same way, but it’s hard-boiled egg yolks.”

“I remember you saying that before,” Holly joked.

This Morning airs weekdays at 10am on ITV. Saturday Mornings by James Martin airs Saturdays at 9.30am on ITV.