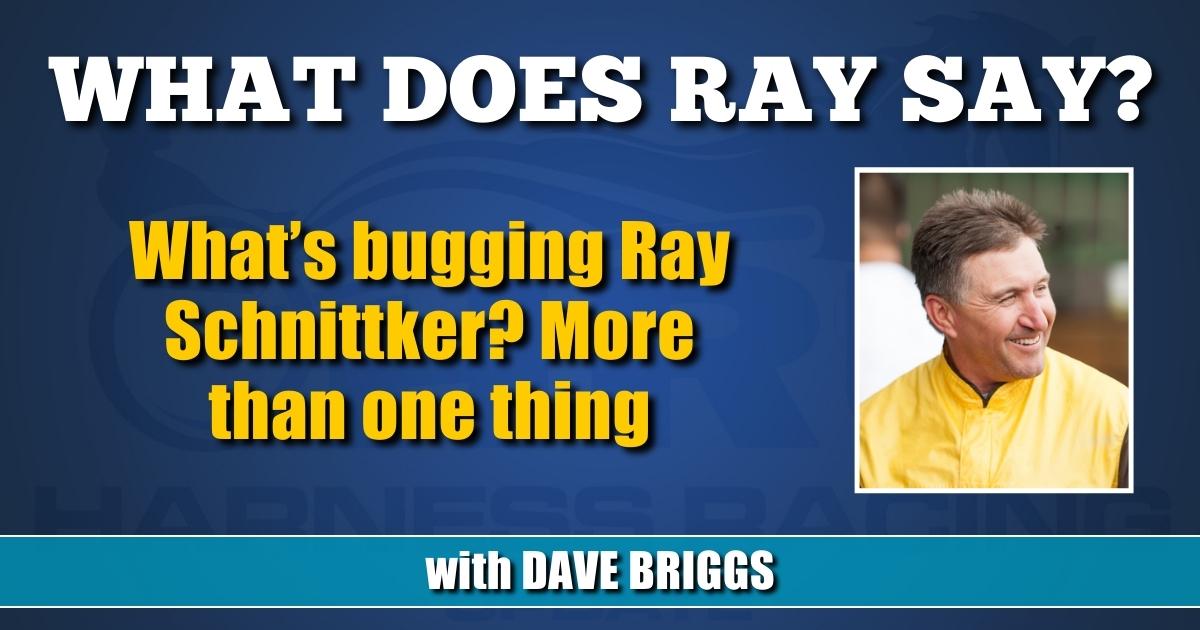 It’s been too long since we checked in with Ray Schnittker, the uncompromising fortuneteller of harness racing. We reached out to see if anything was eating him the other day and it was good to hear the rider hasn’t softened.

Point 1 – Do you really want the government to organize horse races?

It should be noted that Schnittker is a longtime USTA director and the USTA opposes the implementation of the Horseracing Integrity and Safety Authority (HISA). But Schnittker is not against HISA because that is the position of the USTA. He has other worries.

“The leaders of our federal government are Biden and Harris, and we’re going to be low on the food chain in that regard. They don’t look like brain surgeons to me. Who are they going to manage that isn’t half-heartedly corrupt and the job is nothing but a political thing?” asked Schnittker. “If someone tells me, ‘Let the federal government do it,’ I’m watching our President and Vice President and I probably lost $200,000 in the stock market yesterday. If they’re supposed to be our two smartest people, what do we get to run our thing?’

“They’re just going to put some other politician or someone in there and they’re going to do absolutely nothing. Then they will charge us $140 to test a horse at each race.”

While Schnittker believes that drug testing rules should be the same in every state — which is a key policy of HISA — he also believes that state race commissions should do the jobs they’re already paid to do.

Point 2 – Hold horse people accountable when they break the rules

“Jesse James was probably a good guy,” said Schnittker. “All the guys who get into trouble in our game who I’m actually friends with have had beers but there’s no accountability for anyone getting days or anything.

“If you get four months or something, you just change it to someone else’s name and blah blah blah and you just keep going … There’s definitely no accountability and I don’t know how you work around that, but I As When I was a kid you knew that when you have periods, you have periods. The commissions do nothing.

Schnittker said he has a lot of credit for Meadowlands, Tioga Downs and Vernon Downs owner Jeff Gural on the issue of accountability. “He throws people out of his seat, but then they go to Yonkers and there’s no accountability there,” said Schnittker.

Point #3 – Head numbers must be eliminated on all tracks

“One more thing, the head number thing. We allegedly abolished it at the USTA and there are still traces using it for identification,” said Schnittker, adding that there is a danger to everyone if the head numbers fall off.

“There is nothing good. Plus, a groom, that thing comes down and might rip their heads open… Head counts are driving me crazy. It’s like ‘Are you kidding me?’

“They still have a lot of tracks and the classic line is so they can identify a horse. Okay, you have a thoroughbred and a jockey with colors just like us and they have no problem telling you who won the race and who came second. They never had head numbers.”