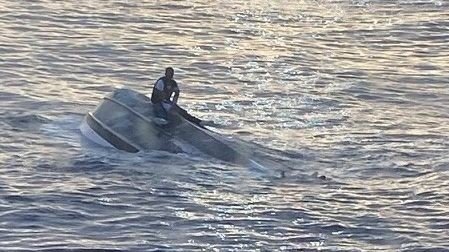 Rescuers search for 39 people who should have been in a boat that capsized on the night of Saturday off the coast of Florida, such as the US Coast Guard tells.

– Clinging to a capsized boat

The Coast Guard was informed of the incident after a man was rescued while “clinging onto a capsized boat,” just over 70 kilometers east of Fort Pierce, the Miami Coast Guard tweeted on Tuesday.

The survivor said he left the Bahamas with 39 others Saturday night and bad weather caused the boat to capsize.

None of the passengers must have had a life jacket.

The Coast Guard further announced Tuesday that its crews are actively searching for people in the water using planes and boats.

The Coast Guard suspects that the passengers were victims of human traffickers.

On Friday last week, the Coast Guard rescued 31 people from a boat that capsized five miles west of Bimini.

See the photos from this rescue operation here: