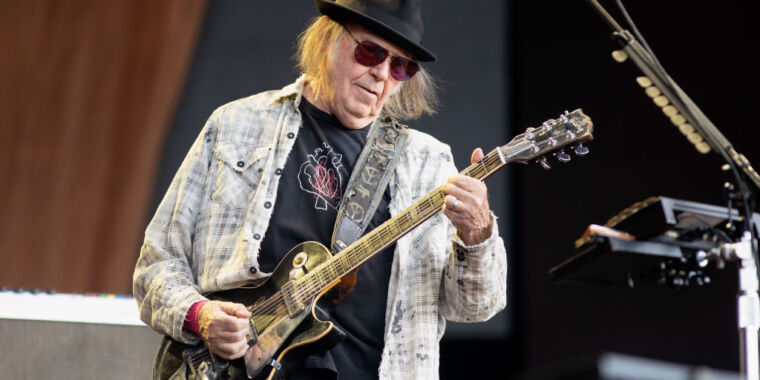 Neil Young has threatened to remove his music from Spotify because he believes the streaming company allows podcaster Joe Rogan to spread “fake information” about vaccines.

In an email to his record label, Warner Records, Young said Spotify has “a responsibility to curb the spread of misinformation on its platform.”

“I want you to immediately let Spotify TODAY know that I want all my music removed from their platform,” he wrote. “You can have Rogan or Young. Not both.”

Young, whose hits include “Heart of Gold” and “Harvest Moon” and who has 6 million monthly listeners on Spotify, is the first major artist to publicly threaten to leave the platform over his association with Rogan, the most popular Podcast on Spotify hosts Spotify app.

Since the company spent $100 million to bring Rogan to Spotify when it aggressively pushed to expand its podcast offering, the company has come under repeated fire for the American commentator’s content.

Young’s letter was in response to a December podcast in which Rogan interviewed Robert Malone, a controversial virologist who researched messenger RNA vaccines and is now skeptical about them. On the podcast, Malone told Rogan that US hospitals have a financial incentive to falsely report deaths as caused by the coronavirus.

Rogan has also encouraged “healthy” young people not to get a COVID-19 vaccine on his podcast.

This has put Spotify in an awkward situation. The company has a commercial interest in keeping Rogan, whose podcast is heard by millions of people. But as Spotify pushes further and further into ownership of its own programming, it faces similar problems and controversies as those hanging over YouTube and other big tech platforms in terms of the content on their sites.

Earlier this month, a group of doctors and scientists called on Spotify to moderate “misinformation” on its platform, arguing Rogan had been making false claims about the coronavirus pandemic and vaccines. “Mass misinformation events of this magnitude have extraordinarily dangerous implications,” the group wrote.

Young’s music was still available on Spotify as of Tuesday morning.

Young removed his music from Spotify in 2015 because he said the sound quality was too bad. Since then it has been restored.

When asked in 2020 about Rogan’s decision to invite conspiracy theorist Alex Jones on his podcast, Spotify CEO Daniel Ek told the Financial Times, “We want creators to be creative. That’s what they do best. We don’t want to play a role in what they should say.”

Rogan hosted Jones on his show, where he made unsubstantiated claims about the dangers of vaccines. Major tech groups like Spotify, Facebook, Apple and Twitter have banned Jones, the far-right founder of InfoWars, who previously said the 2012 Sandy Hook school shooting in Connecticut – in which 26 people, including 20 schoolchildren, were killed – it was a joke.

© 2022 The Financial Times Ltd. All rights reserved May not be redistributed, copied or modified in any way.