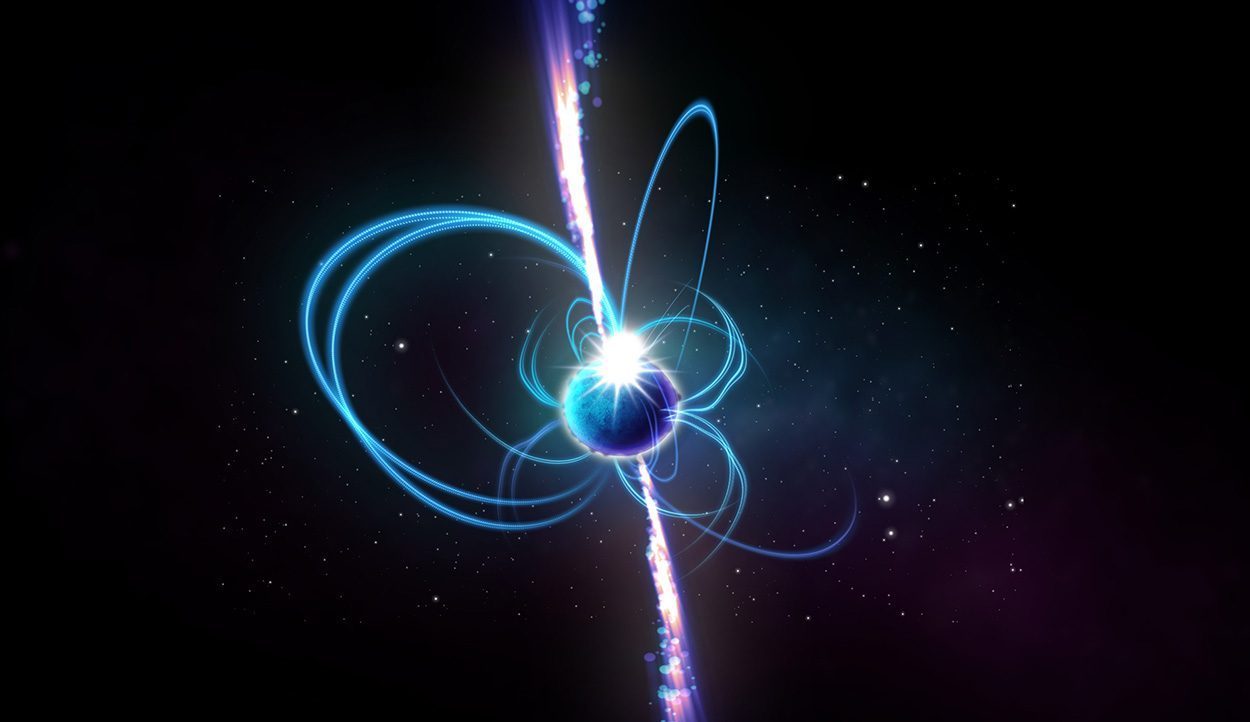 There are many phenomena in the cosmos that produce short-lived or periodic signals – including stellar explosions, rotating neutron stars or variable stars. But now astronomers have caught radio pulses from an unknown object some 4,000 light-years away that don’t match any of the known sources. The radio pulses are only a few seconds long, but are separated by a good 18 minutes. In addition, phases of activity alternate with weeks of rest. It is conceivable that these pulses are generated by a particularly slowly rotating magnetar – a strongly magnetized neutron star. But that is only speculation so far.

Several large radio observatories around the world are listening into space. With the sensitive antennas, these telescopes can observe phenomena in space that emit long-wave electromagnetic radiation. Such radio waves are created, among other things, in the high-energy particle jets of black holes, in stellar eruptions, in supernovae or in the magnetic field of rotating neutron stars. Astronomers refer to short-lived, temporary phenomena as “transient”. The duration of the radio signatures captured by an object usually reveals what it is: The transient signals from stellar explosions appear suddenly, but last for days to weeks. In contrast, the signals from pulsars or the ultra-short pulses of the so-called fast radio bursts can only last milliseconds.

Radio pulses with an unusual period

A discovery made by a team led by Natasha Hurley-Walker from the International Center for Radio Astronomy Research (ICRAR) in Australia is all the more surprising. For their study, the astronomers combed through archived data from the Murchison Widefield Array (MWA), a radio telescope in the outback of Western Australia, using a newly developed search algorithm for transient radio signals. “The MWA’s wide field of view and high sensitivity are perfect for monitoring the entire sky and also for finding the unexpected,” says co-author Tyrone O’Doherty of ICRAR. During their search, the team encountered 71 high-energy radio pulses, all of which appeared to come from the same source. This is about 4,000 light-years away from us – by the standards of radio astronomy, this is sort of in our galactic backyard.

The individual radio pulses were each 30 to 60 seconds long and repeated at intervals of 18.18 minutes. “This is an unusual periodicity that, to our knowledge, has never been observed before,” the astronomers report. Because this radio source lies exactly between the slow and fast transients with this “blink pattern”. Also unusual: in two 30-day phases, the source sent these radio pulses regularly like clockwork. “Whenever we expected the next pulse, it arrived – there were no failures in between,” says the team. However, there was a 26-day break between these two “on” phases, during which no pulses were detected at all. “This is totally unexpected,” says Hurley-Walker. “For an astronomer, this is almost scary, because there is nothing known in the sky that behaves like this.” Both 30-day phases of the radio pulses date from early 2018. The team has not been able to identify any more of these signals in the data since then.

Slow magnetar as a source?

So far, astronomers can only speculate as to what kind of object is the source of these radio pulses. However, from the fact that the radio signals are strongly linearly polarized, they conclude that the source must have a strong magnetic field. The brightness distribution also indicates that the object is compact and rather small. The team believes the radio source, dubbed (GLEAM-X) J162759.5-523504.3, could be a highly magnetized white dwarf or neutron star. Theoretically, when these compact stellar remnants possess a strong magnetic field and rotate, it can result in the release of narrow cones of radio emission at the poles, which then arrive as radio pulses. However, known pulsars and magnetars typically have pulse periods of less than ten seconds because they rotate so rapidly.

Nevertheless, the astronomers believe it is possible that these radio pulses emanate from a so-called ultra-long-period magnetar. “The existence of such slowly rotating neutron stars has already been predicted theoretically,” explains Hurley-Walker. “But nobody expected to be able to detect such an object directly, because they were not considered to be particularly radiation-intensive.” This magnetar would therefore have to convert its magnetic energy into radio radiation in a particularly efficient way. The astronomer and her team are now closely monitoring the source to see if the object becomes active again. “If it does, several telescopes in the southern hemisphere are ready to target it immediately,” says Hurley-Walker. She will also search the archive data of the Murchison Widefield Array for possible other radio sources of this type. “More finds could tell us whether it was a one-off event or the first representative of an entire population,” says the researcher.