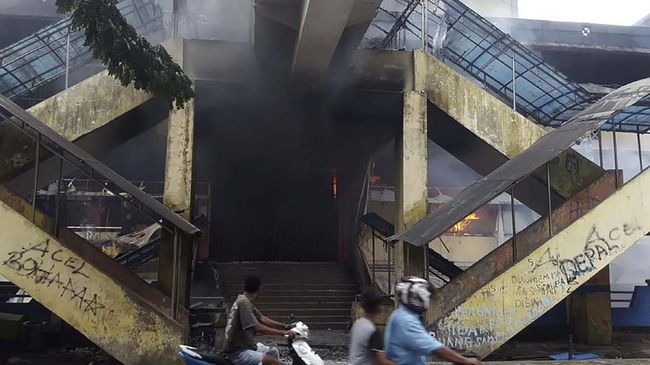 The clash of two groups of residents in the city to press, West Papua province, Tuesday (25.1.) in the early hours of the morning, dozens of people died, two cars and a karaoke place caught fire.

receive information Between One person was stabbed at the scene. And dozens of people were trapped in a karaoke place set on fire by the fighting crowd.

Based on information gathered by karaoke staff, dozens of people were locked inside Karaoke Double0 at the time of the incident, but the exact number is not yet known.

A victim of the stabbing was evacuated to the hospital. Meanwhile, dozens of victims locked in karaoke rooms are being treated by police.

monitoring Between Two hearses were seen waiting at the location of Karaoke Square on Jalan Sungai Maruni, Sorong City at 07:29 WIT.

It was also observed that the Sorong City firefighting team had extinguished the fire and elevated the location of the incident. Meanwhile, dozens of police officers are still guarding the crime scene.

Traffic flow on Jalan Sungai Maruni returned to normal, but only one lane was opened as debris from vehicles burned by the crowds still scattered on the road still lay.

The situation was favorable and according to preliminary police figures, there were 11 deaths in the incident.

Sorong City Police Chief AKBP Ary Nyoto Setiawan confirmed the incident, which resulted in the deaths of dozens of people, after his confirmation.

The police chief explained that preliminary data said there were 12 deaths in the incident. One person was stabbed and 11 people were trapped in a karaoke double set on fire by the mob.

“Initially we thought that everyone in the Double0 karaoke had been evacuated because the police were helping to evacuate the people in the karaoke at the time of the incident. However, when firefighters put out the fire, 11 bodies were found in the karaoke room. ” he said..

“We do not know the exact death toll because further checks are still being carried out, but temporarily in a karaoke room in a room 11 firefighters were found and one stabbing victim who had been evacuated died,” he said.

The police chief added that the dispute arose due to a misunderstanding between two groups of Maluku residents, which started for two days at the Doubel karaoke place, which had been sought for peace but lasted until the early hours.