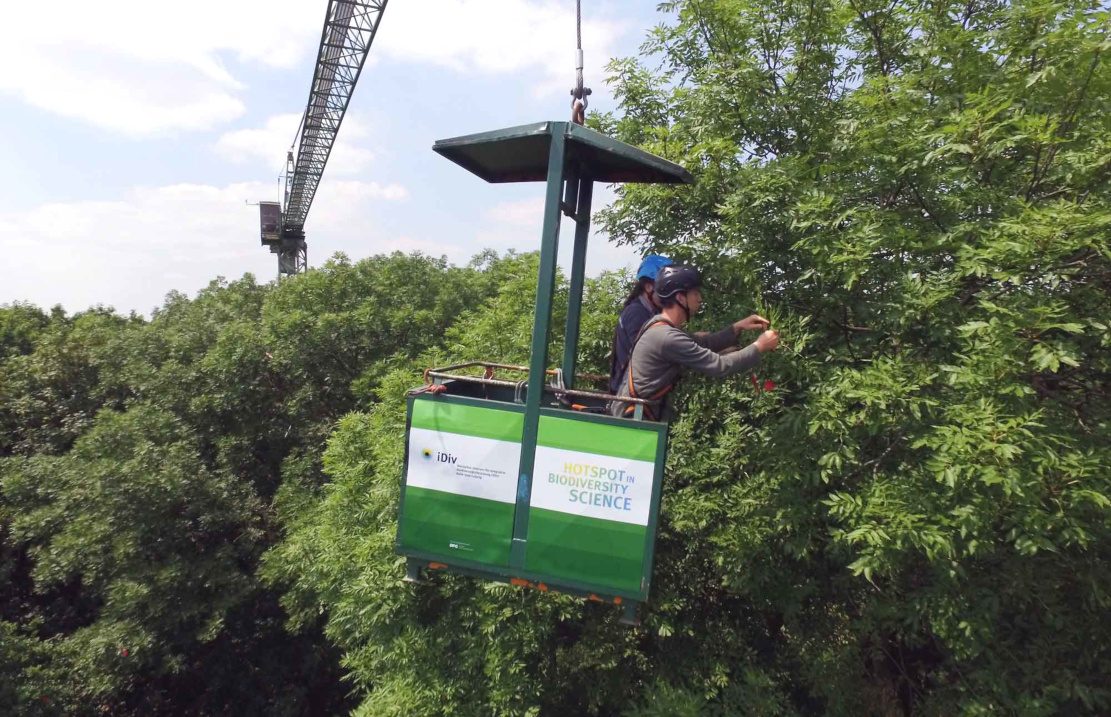 There are fat caterpillars here! German researchers have documented in the canopy of oaks that trees can use scents to attract birds and, above all, predatory insects to fight pests. The biochemical signals clearly determine the composition of the insect community in the canopy. This knowledge could benefit the development of natural pest control strategies in agriculture and forestry, say the researchers.

It is a well-known fact that lush greenery attracts hungry mouths: not only useful and ornamental plants are affected by this – numerous species of insects also target the leaves of trees. The gypsy moth Lymantria dispar is particularly notorious. In the event of a heavy infestation with the caterpillars of this moth species, there is a risk of bare branches and the trees being damaged. It is already known that smells can play an important role in the complex relationships between plants and insects. For example, when laying eggs, the pests are guided by volatile organic compounds (VOCs) that are typical of their respective victims. But plants are not helplessly at the mercy of caterpillars and the like – and signal substances in the air also have an effect here: When infested, they release special VOCs to put themselves on the alert. They then form defenses in their leaves that the herbivores don’t like or don’t like.

In addition, it was already known in principle that the volatile substances of plants can fulfill a kind of call for help function in the event of pest infestation: According to this, some enemies of caterpillars and co have learned to interpret certain plant VOCs as an indication of their prey. This then also benefits the plants: In this way, they can organize beneficial organisms that free them from the pests. But in the case of trees, such effects had only been demonstrated in laboratory or garden experiments. “However, this defense mechanism has never been investigated in a realistic environment for mature trees,” says Martin Volf from the German Center for Integrative Biodiversity Research (iDiv) in Leipzig.

In order to close this gap, he and his colleagues carried out experiments at dizzying heights: A crane lifted the scientists into the approximately 40 meter high treetops of oaks in the Leipzig floodplain forest. In this natural environment, they carried out experiments, recorded the infestation with gypsy moths and the occurrence of beneficial insects. In addition, the team analyzed substances in the leaves and the volatile organic compounds using modern metabolomics methods.

In order to simulate an infestation with feeding insects on some of the test trees, the researchers sprayed their branches with the substance methyl jasmonate. This is a hormone known to trigger immune responses in plants. Feeding tests with gypsy moth caterpillars have now confirmed that the pests avoided the leaves that had been alarmed by the hormone. Apparently, this was due to a stimulation effect that the researchers were able to prove through their molecular analyses: the leaves reacted by forming antibodies such as bitter-tasting tannins. But not only that, as the comparative analyzes of the volatile substances showed. Accordingly, the simulated pest infestation using methyl jasmonate led to the formation of a special scent signature, which is mainly characterized by certain representatives of the terpenoids.

The further study results showed that these substances apparently produce an odor that attracts beneficial insects. Because it was shown that the activation of the plant defense reaction led to increased visits from predators of the caterpillars such as parasitic parasitic wasps and assassin bugs. According to the researchers, the biochemical calls for help are so effective that they significantly influence the composition of the insect community in the canopy. Evidence of their hunting activity using plastic caterpillar dummies showed that birds also literally fly at the volatile substances. The researchers attached these to the test plants. As it turned out, these test dummies showed significantly more pick marks in the treated crown areas. This showed that the tit and co can also record the chemical signals from the trees.

The scientists say there is further potential in the results. As the observed effects make clear, it could be worth investigating the interesting interrelationships between plants, pests and beneficial insects in more detail – and making them usable. “The findings can help us to develop alternative, natural strategies for pest control in agriculture and forestry and thus implement the plan to save on pesticides,” says senior author Nicole van Dam from iDiv.