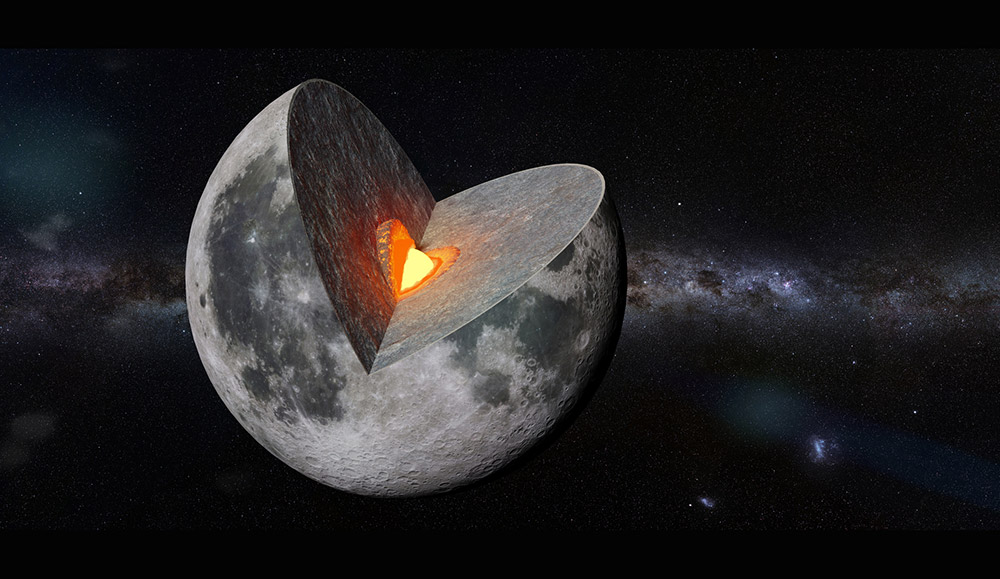 Lunar paradox: Actually, the young moon was too small and cool to generate a strong magnetic field. Despite this, its magnetic field used to be even stronger than Earth’s. US researchers may now have found out how this was possible. According to this, in the early lunar period, huge, solidified parts of the crust sank down into the interior of the moon several times. There they triggered convection currents in the lunar core, which briefly acted as a magnetic dynamo.

The earth has been shielded from a strong magnetic field since early times. Its motor is the electromagnetic interaction of liquid and solid iron in the earth’s core – the geodynamo. But what about the moon? Although it no longer has a magnetic field today, rock samples from the Apollo moon missions show that this was different until around 3.5 billion years ago. They provide indications of lunar magnetic field strengths of 40 to 120 microtesla – and thus even a far stronger field than the earth has today.

There is even evidence that the young moon shared its magnetic field with Earth at that time, giving our planet additional protection from harsh cosmic rays.

But how can that be? Actually, the moon is far too small to produce such high magnetic intensities. According to current theory, even in its hot early days, the lunar core would not have been able to develop sufficiently strong convection currents. “Magnetic intensities derived from the lunar rocks would require thousands of times more energy than possible,” explain Brown University’s Alexander Evans and Stanford University’s Sonia Tikoo.

And something else is strange: The Apollo moon samples show an extreme range of magnetizations – this is true even for rocks from the early lunar period. Some of these chunks indicate a strong lunar magnetic field, while others are not magnetized at all. This gave the researchers an idea: “Rather than pondering where the energy for a sustained strong lunar magnetic field came from, there may be a mechanism that can at least explain brief periods of high field intensity,” says Evans.

Time travel to the freezing moon

Evans and Tikoo have investigated such a mechanism in more detail using model simulations. As the surface of the young, still incandescent moon gradually cooled around 4.25 billion ago, the various mineral components began to cool one after the other. Denser, heavier minerals sank into the interior, while lighter ones formed the solidifying crust.

Then followed the step that may be decisive for the lunar magnetic field: Titanium-bearing minerals collected under the lunar crust, which were denser than the underlying layers of the mantle. As these minerals also cooled, they sank through the lunar mantle to the core boundary in large, viscous clumps. “According to our model, clumps of these titanium-rich diapirs could have formed and subsided as large as 60 kilometers in size,” report Evans and Tikoo.

Cool clumps as a convection turbo

Arriving at the lunar core, these 1,100 to 1,300 degree hot lumps acted like a cold shower for the core, which is up to a thousand degrees hotter. “You can think of it like a drop of cold water on a hot stovetop,” explains Evans. The strong temperature difference meant that at this point more heat was transferred from the core to the cool clumps of mantle rock. “This in turn increased the convection currents in the core,” says Evans.

However, the stronger the core currents, the stronger the magnetic field they generate. This additional drive lasts until the cooler clump of mantle rock has taken on the temperature of its surroundings. In principle, the sunken mantle lumps acted like a sputtering motor for the magnet dynamo in the lunar core.

According to the model, 100 such titanium-rich clumps would have been enough to bring the lunar magnetic field to 50 microtesla and more for several hundred years. It was only when the interior of the moon had cooled down even further around 3.5 billion years ago that the clumps stopped sinking – and with this the lunar magnetic dynamo gradually weakened.

Good agreement with the observations

“Our model can therefore explain both the intensity and the large variability of the Apollo moon samples – something that no other model has been able to do before,” says Evans. “At the same time, this agrees well with what we know about the interior of the moon.” In fact, measurement data suggest that up to 530 cubic kilometers of titanium-rich mantle rock form a layer around 200 kilometers thick around the lunar core. They could be the relic of early mantle mineral clumps.

If this scenario is confirmed, then the paradox of the lunar magnetic field would be solved. Because the lunar core was actually too small to generate strong convection currents and thus high magnetic field strengths. But the local cold spurts of the sinking mantle clumps always acted like a short-term turbo – and temporarily caused “impossible” high field strengths. (Nature Astronomy, 2022; doi: 10.1038/s41550-021-01574-y)