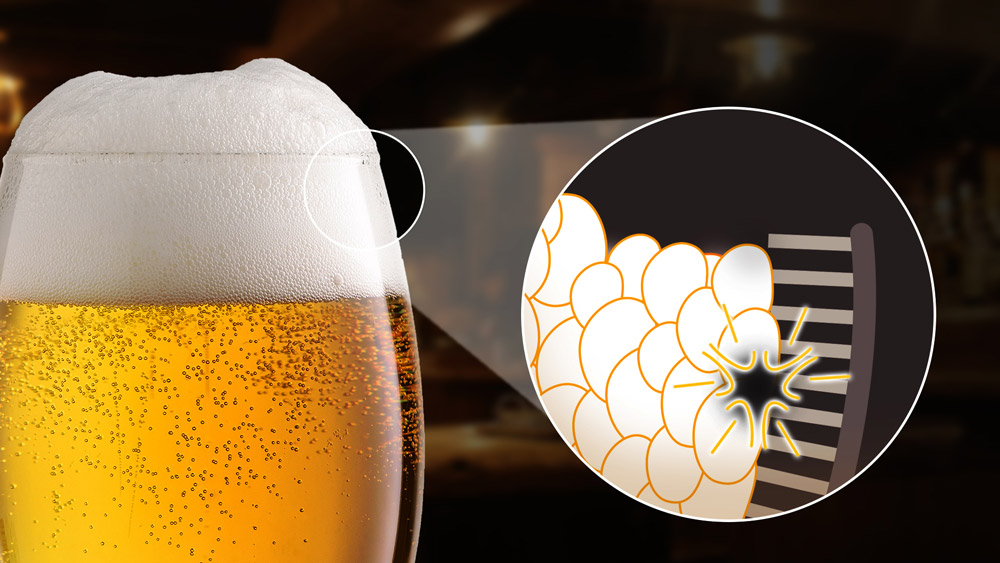 No fizzers: special surfaces can prevent the formation of foam with certain liquids as they form. They also help to reduce existing foam more quickly, as researchers report in the journal “Nature Communications”. They have developed such repellent coatings and tested them on beer and soap foam. In the future, the superamphiphobic surfaces could be used in industrial bottling plants.

Depending on the situation, the foaming of liquids can be desirable or a hindrance. When a fresh glass of beer is poured, you tend to want long-lasting foam. However, in industrial beer bottling, foam should be avoided to speed up the bottling process. Foam formation is often undesirable in other industrial processes as well – but it is not always easy to prevent.

Basically, foam consists of many air bubbles that are separated from each other by a thin film of liquid. This is stabilized by surface-active substances such as surfactants, lipids or proteins. In order to prevent foaming, oils, waxes or microparticles, among other things, are currently added to products in industry. They help neighboring air bubbles to fuse and the foam to disintegrate more quickly. However, some of these additives have to be filtered out afterwards, which is time-consuming.

A research team headed by William Wong from the Max Planck Institute for Polymer Research in Mainz has therefore tested whether foaming can also be prevented by a special surface design of the vessel instead of chemical additives. To do this, they examined the effect of so-called superamphiphobic surfaces on foam.

Superamphiphobic surfaces are characterized by the fact that they are both strongly hydrophobic and strongly lipophobic – they have an equally repellent effect on aqueous and oily substances. They have a microscopic roughness, which means that the liquids sit on small columns, only a few microns in size, and a continuous layer of air. This way the liquids cannot stick to the surface. This effect is known, for example, from the lotus leaf.

“We asked ourselves whether we could use such surfaces to prevent the formation of foam or whether we could also dissolve existing foam,” says Wong. The idea behind it: The fine columns destabilize the bubbles in the foam on contact and cause them to burst, similar to pricking a balloon with a needle. The air in the foam is then released and allowed to escape through the continuous layer of air in the superamphiphobic layer.

Beer and soap under observation

To test the extent to which their idea can be implemented in reality, the scientists coated conventional drinking glasses with a thin, superamphiphobic layer and then filled them with beer or soapy water. In the case of the beer glasses, they also tested a thin coating made of a silicon-based polymer and a nanostructure whose interstices, in contrast to the superamphiphobic material, were not filled with air but with a water-repellent hexadecane oil. Commercial standard glass served as the control surface in each of the experiments.

In order to determine how well the respective surfaces fared in the fight against the beer foam, the scientists measured the volume of the foam over time after filling. In addition, they examined how the radii of the air bubbles changed and documented the frequency of merging and bursting of the bubbles.

The result of the beer investigation shows that there is no clear winner. Although the foam volume initially decreases a little faster with the hexadecane surface, after ten minutes it is at the same level as the volume in the superamphiphobic coated glass – but both show improved foam reduction compared to normal glass.

“In our opinion, the properties of such surfaces in connection with foam have long been underestimated,” says senior author Doris Vollmer, also from the Max Planck Institute for Polymer Research. “We were able to show that superamphiphobic surfaces can efficiently destroy existing foam and prevent foam formation from the outset.”

Can speed up filling processes

Ultimately, however, the research team sees the future of superamphiphobic coatings less in the beer glass at the bar and more in large-scale industrial plants. “This additive-free and energy-efficient method for defoaming and anti-foaming processes may be of particular importance for the food and chemical industries,” the scientists write.

They see the greatest advantages in the fact that the process is easily scalable to larger applications and that there are no toxins or additives involved. In addition, according to the researchers, superamphiphobic coatings are very easy to care for in the long term and still serve their purpose even after repeated use. (Nature Communications, 2022; doi: 10.1038/s41467-021-25556-w)