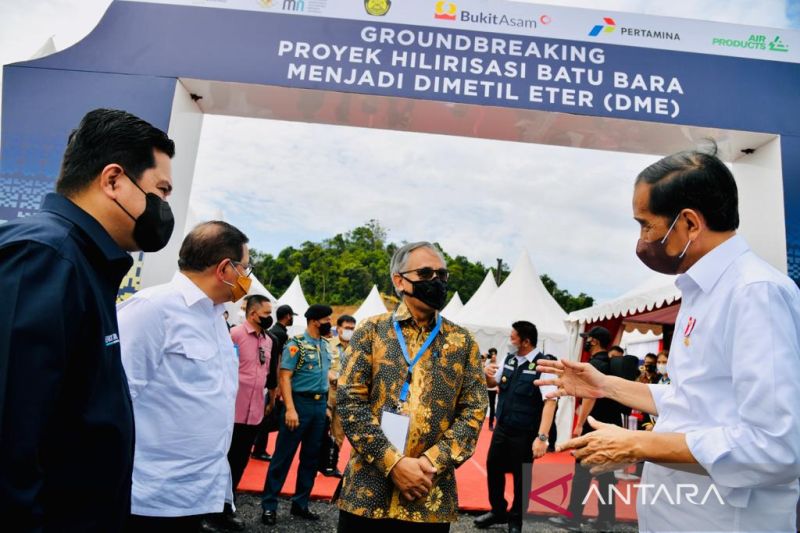 So shall we continue importing?

Jakarta (ANTARA) – There should be no delays on downstream projects, including the processing of coal into dimethyl ether (DME) in Muara Enim district, South Sumatra, where a plant is being built for this purpose, President Joko Widodo (Jokowi) has said said.

“Prior to this, I spoke to everyone involved to ensure that the project would be completed in 30 months according to plan. Once we complete this project, we will build a new one elsewhere,” he said while attending the groundbreaking event for the coal downstream project on Monday.

The project is a collaboration between state-owned enterprise (SOE) subsidiary PT Bukit Asam, oil and gas SOE PT Pertamina and an American investor, he noted.

During the groundbreaking, the President also reviewed the cooking fires generated by DME and Liquefied Petroleum Gas (LPG).

“The price is very high, so we need to provide a subsidy of about 60-70 trillion rupees for it. So shall we continue importing? If we keep importing, it will be the other country that will benefit and open up new job opportunities,” he stressed.

Therefore, continued imports will hurt Indonesia’s economic sector as there will be no new jobs for the country’s people, he said.

Related news: Jokowi predicts that the inflation rate will remain at 3 percent

Meanwhile, the indirect outcome of the trial will create double or triple the number of job opportunities, he said.

In addition, the government will be able to improve the national trade balance, he added.

“We estimate that for every million ton of DME produced, we can achieve efficiencies of around Rp 6 to 7 trillion. Therefore, there is no reason not to support the import-replacement manufacturing program downstream,” he stressed.