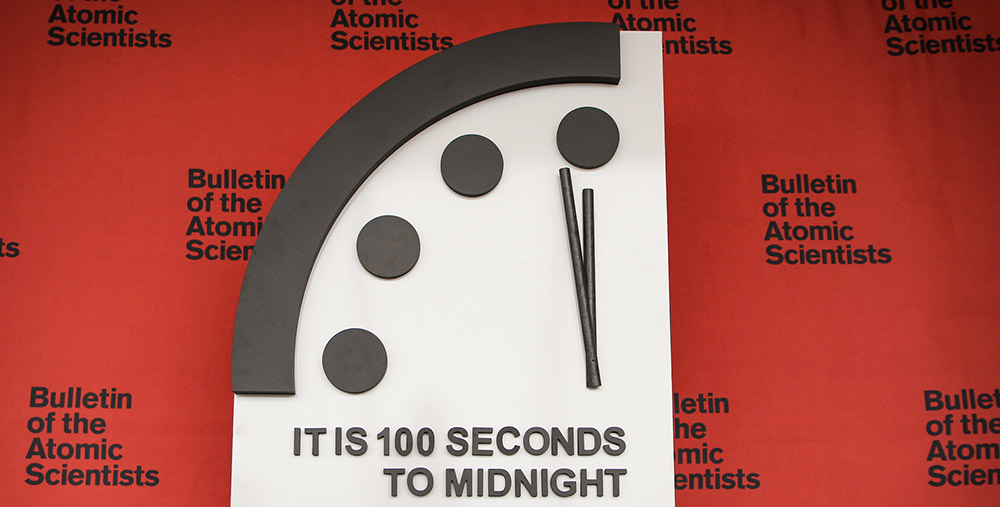 Danger remains high: The doomsday clock remains at the record level of just 100 seconds before midnight again this year – for the second time in its history. In doing so, she shows the acute threat that humanity is currently facing from climate change, disinformation, but also from political conflicts and nuclear armament, as the scientific committee of the “Bulletin of the Atomic Scientists” explains.

Every year since 1947, the committee of the “Bulletin of the Atomic Scientists” (BAS), founded by Albert Einstein, J. Robert Oppenheimer and other physicists, has assessed the threat to mankind and expressed the threat as a pointer on the doomsday clock. It is intended to show how close humanity is to destroying itself through conflict, weapons and other man-made technologies. This year the Doomsday Clock will be 75 years old.

In 2018, the doomsday clock was set to two minutes to twelve for the first time since the Cold War, and in 2020 the hands even advanced to the record value of 100 seconds to midnight.

For 2022, the doomsday clock remains at 100 seconds to twelve. “This decision in no way means that the international situation has stabilized – on the contrary. The clock remains as close as ever to an apocalypse that could end our civilization. The world remains in an extremely dangerous situation,” the committee stated.

There have been some positive developments in 2021, including the move to a less unpredictable US administration and its associated return to the Paris climate agreement and to the negotiating table on the Iran nuclear deal. “But that is not enough to reverse the negative trends in the international security situation,” the Bulletin said.

One factor in the acutely high threat is smoldering political conflicts between major powers such as the USA, China and Russia. According to the watch team, the Ukraine conflict in particular marks a potential spark for the tense situation. In addition, all three nuclear powers continue to upgrade: Russia and China have tested anti-satellite missiles, all three conducted tests with hypersonic missiles.

North Korea continues largely unrestrictedly to develop intermediate and long-range missiles, Iran continues to enrich uranium and refuses to return to the negotiating table until all sanctions are lifted. India and Pakistan are also continuing to upgrade, both nuclear and conventional. “If all of this is not contained, this could mark the beginning of a dangerous new arms race,” warns the BAS.

The watch committee sees another threat in climate change. In view of the urgent need for action, there have again been many words but relatively few actions, they warn. It is true that many countries tightened their national emission reduction targets as part of the world climate conference in Glasgow. But the largest emitters in particular continue to lag behind what is necessary, according to the BAS.

The scientists see a warning shot from nature in the corona pandemic. She demonstrated the devastating effects a biological threat could have on people, the economy and politics. “But what the world has experienced in this pandemic is far from the worst-case scenario,” emphasizes the BAS. One must be prepared that Covid-19 will not be the last biological threat we will face in our lifetime.

“We can no longer afford to ignore the biological threats. If we do that, diseases and the lives they claim will push the hands even closer to midnight,” says Asha M. George of the Bulletin of the Atomic Scientists.

The Watch Committee sees another threat to human security in the ever-increasing spread of disinformation, which sows distrust in democratic institutions, but also in science. “Technology has contributed to a climate of opinion where no rational argument or evidence can sway conspiracy believers to reason,” says Herb Lin of the BAS. “This results in a split in the general understanding of what truth is.”

On the digital level, cyber attacks against institutions, companies and other actors have reached new dimensions. As examples, the scientists cite the Microsoft Exchange SolarWinds hack, which affected millions of people around the world, or ransomware attacks with millions of US dollars in ransom demands. “All of this demonstrates the far-reaching effects of the vulnerable cyber world,” according to the BAS.

Overall, the scientists appeal to all actors to act to eliminate the acute threats to human civilization. “When the clock is at 100 seconds to twelve, it affects us all,” she said in her statement. “The situation is dangerous and unstable and the time to act is now.”

Quelle: Bulletin of the Atomic Scientists