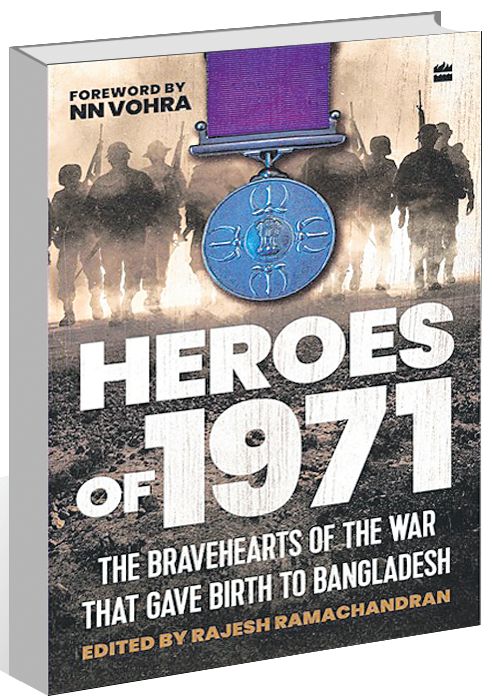 THE 1971 war occupies an exceptional place in the history of post-independence India. To celebrate the 50th anniversary of the war, The Tribune has published a book entitled Heroes of 1971: The Bravehearts of the War That Gave Birth to Bangladesh. The book is edited by Rajesh Ramachandran, Editor of The Tribune, who is himself an avid observer and reporter of wars, uprisings and conflicts.

The 1971 war was not only a glorious military victory, but as NN Vohra writes in the book’s foreword: “The dismemberment of Pakistan and the birth of Bangladesh changed the geopolitical configuration of the Indian subcontinent and South Asia.” put the spirits of the 1962 defeat to rest.

The book is in an interesting format in two parts. The first part is a compilation of articles published in The Tribune as a special series of stories about the 1971 war. The selected list of articles includes military officers who took part in the war, military historians, strategic affairs experts and journalists. The variety of perspectives enriches the collection.

Lieutenant General SS Mehta, then a young armored squadron commander, describes the march to Dhaka, including the challenge of crossing the Meghna River with the PT-76 amphibious tanks. Cmde Srikant and Lt Cdr Divyajot describe the naval operations around the port of Karachi which is now celebrated as Naval Day each year. Air Vice Marshal Subramaniam gives a strategic overview of air operations on the Eastern and Western Fronts. Manoj Joshi remains true to the story and critically analyzes the battles on the western front, where India was unable to achieve any significant military successes due to “indifferent executions” and a largely defensive strategy.

There are personal stories that go beyond the battlefields. Lt. Gen. Sujlana recalls his days at the National Defense Academy and the Indian Military Academy and the transformation of boys into officers in the summer of 1971. Many of these officers sacrificed everything in the 1971 war, but their memories live on in a special way in the hearts of their classmates.

There is a story about a meeting between Col Wahi and Subedar Abdul Khaliq, a Pakistani prisoner of war. Abdul Khaliq was considered the fastest sprinter in Asia until he was dethroned by Milkha Singh. What comes across in this play is the soldiers’ respect for those who served in uniform, whether victorious or vanquished. Maj Ishleen Kaur brings the human perspective of war through stories of women who have lost their husbands but not their spirit and resolve.

Two articles put the 1971 war in a contemporary context. Admiral Arun Prakash points out that the navy’s role in the war should have made decision-makers more aware of the crucial role of sea power in India’s security matrix. Unfortunately this did not happen. He hopes that the ongoing military standoff with China might draw more policymakers’ attention to the maritime sphere.

Rajesh Ramachandran questions whether we can now repeat the 1971 victory. He argues that an “institutional weak” India craves strong leaders. Indira was successful in 1971 because she inherited a system that was idealistic in intent. Ramachandran warns that “strong leaders today must analyze whether they can repeat Indira’s feat while presiding over a people fearful of discord and discord within the nation.”

The second part of the book gives the details of the four Param Vir Chakra and 76 Maha Vir Chakra laureates. Details have been carefully compiled and in most cases the official justification for the award has been released. We often remember our military heroes, but some are more immortalized than others. The book serves an extremely valuable purpose in bringing all names together in one place and giving them equal importance.

In the foreword, NN Vohra regrets the delay in publishing the official history of the wars in India. Because of this, “the people in general, especially our youth, failed to appreciate the tremendous sacrifices made by the brave officers and men of our armed forces who defended and protected our borders by land, sea and air” . “Heroes of 1971” makes a valuable contribution to this.