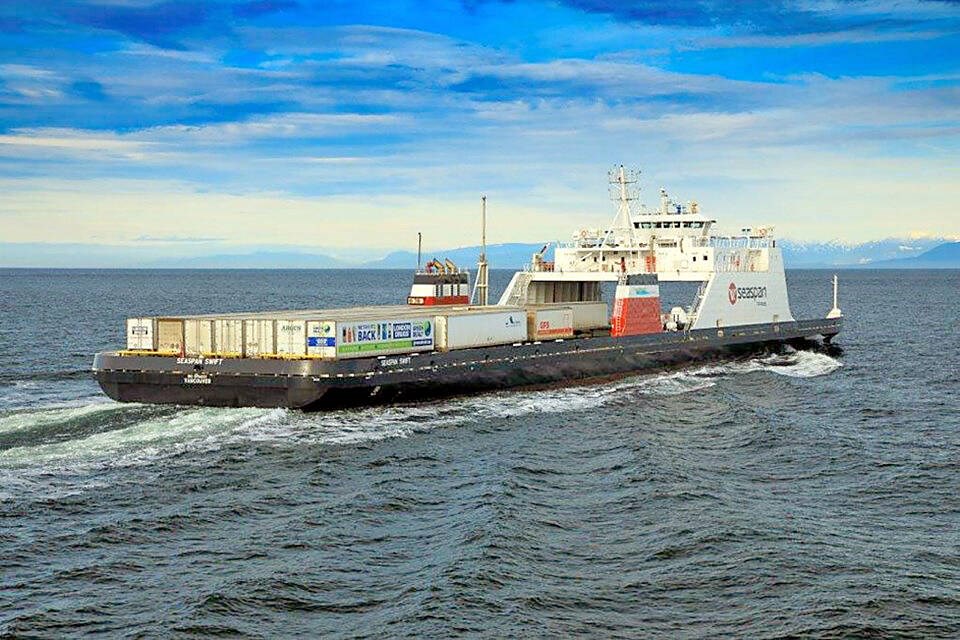 Seaspan’s cargo ferries bring an estimated 50 percent of goods to Vancouver Island, transporting everything from groceries to building materials.

A short-term strike that threatened to disrupt the delivery of Seaspan Ferries supplies to Vancouver Island was called off after the company and unionized workers reached a tentative agreement on a new contract.

The agreement avoids disruptions in supply to the island. About 50 percent of consumer goods that come to the island are shipped by Seaspan through Duke Point in Nanaimo and Swartz Bay on the Saanich Peninsula.

The trips were halted late Friday morning and truck drivers turned away. With an interim agreement, cargo ferries were expected to resume Friday night and continue through the weekend, Seaspan said in a statement.

Seaspan expects to be fully operational on Monday and get back to her busy sailing schedule.

Details of the agreement were not released. The proposal will go to union members for a vote, Seaspan said.

A spokesman for the Canadian Merchant Service Guild representing Seaspan workers could not be reached.

The talks started in January 2021 and had involved provincial mediators.

The union was legally able to go on strike at 3pm on Friday. Shortly before that point, it announced on its website that it was on strike, prompting Seaspan to suspend service.

The collective bargaining agreement between the guild and Seaspan, filed with the BC Labor Relations Board, shows that the latest contract ran for seven years, from October 1, 2013 to September 30, 2020. The 39-page contract provided for annual wage increases of two Percent.

Had the strike happened, Seaspan would have been limited to 30 percent of its deadweight capacity, the company told customers Thursday. This level of service was established as part of an Essential Service Order issued by the BC Labor Relations Board.

Brandon Peters of Ray Peters Trucking in Chemainus said Thursday that a strike “would affect us all, that’s for sure. Even if we are all competitors. It will be massive for all of us. So, yes, we are panicking and hoping it gets resolved immediately.”

The family business ships about 40 trailers a day on Seaspan, which accounts for about 90 percent of the company’s work, he said.

Ray Peters Trucking transports many building materials such as steel, wood and cement.

Peters reckons that in the event of a strike, BC Ferries would not be able to handle the volume of traffic that its services require. BC Ferries has recently canceled a number of sailings due to staff shortages.

It’s unclear how BC Ferries would address a strike at Seaspan. The company did not respond with comment on Thursday.

Kendra Slawson, Logistics Coordinator at Penta Transport Ltd. in Nanaimo, was frustrated that Seaspan didn’t notify customers earlier than Thursday morning that there might be service cuts. She said she was in “a little panic mode”.

Slawson reckons Seaspan ferries would carry food and fuel rather than other materials during a strike.

Penta spends just under $2 million annually on Seaspan, shipping 20 or more shipments back and forth a day, she said.

“It’s an integral part of our business.”

The trailers, which mainly haul construction materials and other items like pools and hot tubs, go to construction sites where crews are waiting for them, Slawson said. The company also supplies to the Trans Mountain pipeline project in Burnaby and SkyTrain works.

Slawson said she tried to speak to someone in Seaspan Thursday but was unsuccessful.