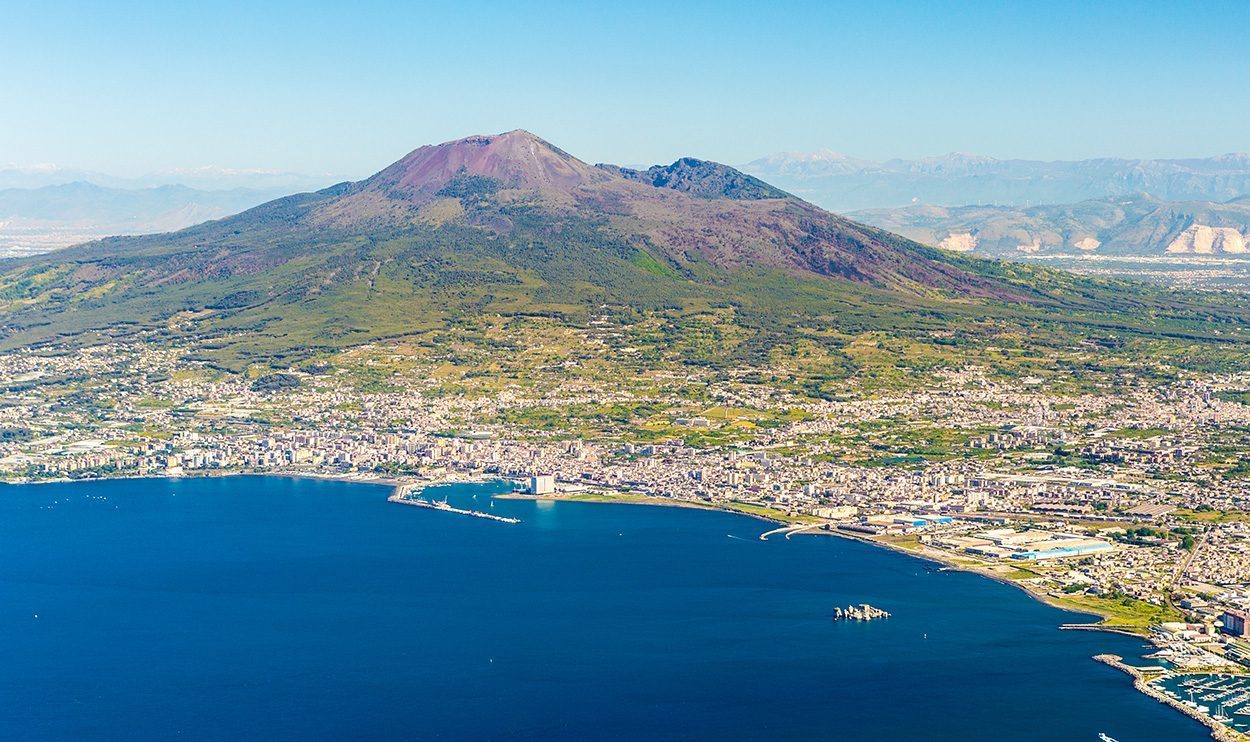 The volcano Vesuvius near Naples has a long tradition of eruptions – and one of the best documented. But when does the next big eruption threaten? Researchers have now investigated this using tiny garnet crystals in the lava of past eruptions. Their result gives the all-clear: The state of the lava and the intervals between historical Plinian eruptions suggest that Vesuvius will remain dormant for several hundred years before an explosive eruption threatens. At the same time, the data provide more information about what is happening in the magma chambers under the volcano before such an event.

The explosive danger emanating from Mount Vesuvius is not only reported in ancient records: the cities of Pompeii and Herculaneum, which were buried by ash flows and lava in 79 AD, also show how violently this mountain of fire can erupt. Because the Roman writer Pliny the Younger described the dramatic events at the time, volcanic eruptions of this explosive type are still referred to as Plinian eruptions today. Today the Feuerberg, in whose immediate vicinity around three million people live, is dormant. But for their safety, it is immensely important to know what is going on under the volcano and how high the risk of a reawakening is. In the case of Vesuvius, however, this is not easy to determine because it is fed by a complex system of several magma chambers. “The processes in these magma chambers and the temporal sequences in them have so far hardly been defined,” explain Jörn-Frederik Wotzlaw from ETH Zurich and his colleagues.

To find out more about the inner workings of Mount Vesuvius, they took a closer look at what happened during the volcano’s four largest Plinian eruptions over the past 10,000 years. These include the Marcato eruption around 8890 years ago, the Avellino eruption 3950 years ago, the eruption of Pompeii around 79 AD. and the Pollena eruption in 472. All of these eruptions left behind lava and pumice rock containing tiny garnet crystals. They were formed when the magma before the eruption settled in the upper magma chamber of the volcano and cooled in the process. This leads to magmatic differentiation, which produces chemically altered, so-called phonolitic magma. The age of the garnet crystals in the old volcanic lava gives information about when this differentiation process took place and thus how long the magma stayed in the upper reservoir feeding the eruptions before it erupted.

For their study, the researchers collected rock samples containing garnet crystals from all four major Vesuvius eruptions and analyzed them in the laboratory using uranium-thorium dating. From the ratio of the two radioactive isotopes it can be deduced when the minerals have crystallized. The analyzes showed that before the two oldest eruptions, the magma remained in the upper magma chamber for around 5000 years before the eruption occurred. “We think it likely that a large body of phonolitic magma in the upper crust blocked the rise of more pristine, hotter melt from deeper reservoirs,” explains senior author Olivier Bachmann from ETH Zurich. Only when the so-called mafic magma from below flowed into the upper chamber did this trigger the explosive eruption.

The Vesuvius magma is not yet ripe

However, the magma stayed in the upper reservoir for a shorter period of time before Vesuvius’ two more recent eruptions – those of Pompeii and the Pollena eruption – as revealed by the garnet crystals. It took only around 900 to 800 years from the differentiation of the molten rock into phonolitic magma to the eruption. “This suggests that the presence of phonolitic magma in the upper crust controls the eruption dynamics of Vesuvius,” the researchers explain. They conclude that the danger of an explosive Plinian eruption only becomes acute when the upper chamber contains this type of magma and erupts it, for example, in one of the volcano’s smaller eruptions. However, since Vesuvius has mainly brought mafic, more original magma to light since 1631, Wotzlaw and his colleagues consider it rather unlikely that differentiated phonolite is currently accumulating under the Feuerberg.

“We therefore consider it more likely that a large, explosive eruption of Vesuvius would only occur after a quiescent phase of several hundred years,” says Bachmann. If predominantly mafic magma continues to erupt in the coming decades, this could indicate that there is no danger of a Plinian eruption yet. “Smaller, but nevertheless very dangerous outbreaks such as that of 1944 or that of 1631 can occur after short rest periods,” emphasizes Wotzlaw. To avoid nasty surprises, Vesuvius and its activities are monitored 24 hours a day. For example, Italy’s volcanological service measures every earthquake around the volcano, analyzes the gases escaping from fumaroles and observes ground deformations that indicate underground activity. If the monitoring shows that an outbreak is imminent, an emergency plan will come into force, which includes the evacuation of the greater Naples area.