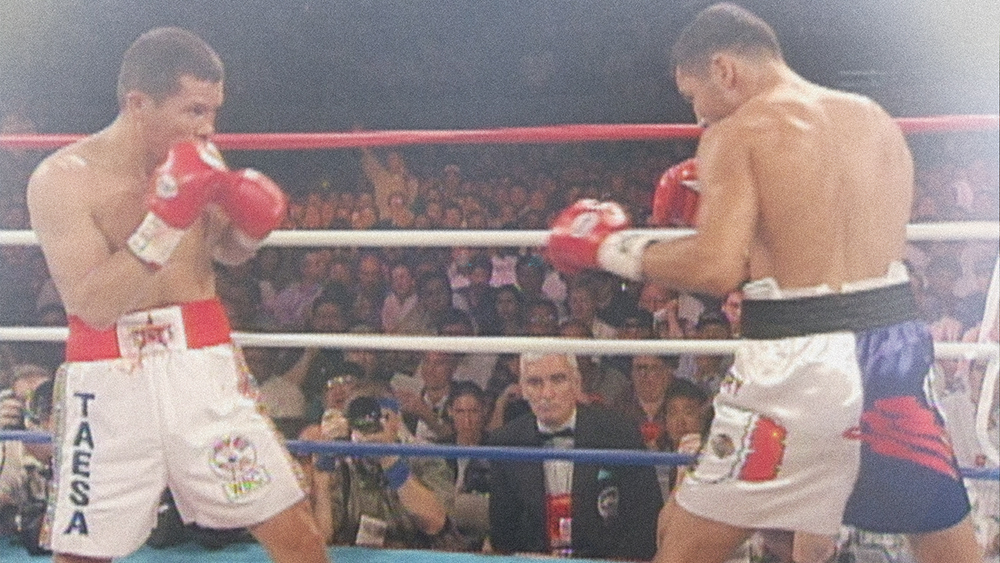 “Boxing is an opera for Latinos,” we hear in the early moments of “La Guerra Civil,” a sweeping visual history of one of the most momentous bouts in contemporary boxing, directed with verve by the powerful actor-filmmaker Eva Longoria Bastón. But for the fight in question, which took place between Oscar De La Hoya and Julio César Chávez a quarter century ago, the Mexican communities both at home and in the US had much more to see and think about than the drama and spectacle inherent in the revered sport.

In 1996, the year of the legendary game, East LA’s De La Hoya was known as “the golden boy.” A beloved Olympian with movie-star looks, he was so popular with the ladies that several moments in Longoria Bastón’s entertaining documentary show fans screaming or trying to steal a kiss as if they’ve just discovered The Beatles. Older, tougher looking and born in Mexico, Chávez as an athlete from across the border invited a different kind of fanbase. “Chávez bleeds for us, De La Hoya bleeds for money” was a common acronym for how the duo was perceived by the public. To many, Chávez was the authentic salt-of-the-earth Mexican with his tough background, while De La Hoya’s Mexican-American identity was something of a liability. The stakes were high for fighters and fans alike, as if affiliation with either player defined one’s core identity as Mexican.

This is the premise at the heart of La Guerra Civil, and it’s perhaps repeated a little too often by the myriad colorful talking heads in this slightly overlong film – from sportswriter Claudia Trejos and actor George Lopez to historians, coaches, entrepreneurs and beyond. But the most notable interviewees, and the real reason the film is urgent, are Chávez and De La Hoya themselves. Through Longoria Bastón’s extraordinary approach, it’s a treat (and a healthy dose of ’90s nostalgia) to dig deep into these two sensational characters hear, even if the repetitive points they make need more narrow cuts.

Still, Longoria Bastón can’t be faulted for being overly infatuated with the golden bits of sound she scoops from the two legends, carefully interviewed against a simple yet industrial-sounding artistic backdrop. Working with her editor Luis Alvarez y Alvarez, she quickly puts together her dueling words on what feels like a rematch between Chávez and De La Hoya, and augments them with rich archival footage presented in a neatly chronological manner. In this respect, you don’t have to be a boxing expert to like “La Guerra Civil”, just as you don’t have to love “Rocky”. What you need instead is a sensitive conscience about identity issues, some of which should resonate with immigrants with a dual sense of belonging. It also helps to have a thoughtful view of what it means to compete at the risk of losing when you have something to prove other than your talent – the crux of many popular sports films in cinematic history.

Longoria offers a generous perspective on these matters. By analyzing the respective stories of the two fighters from the ground up, she underscores their unifying similarities as well as their differences. We learn that both Chávez and De La Hoya had their share of financial struggles and painful childhood challenges. Raised in poverty, Chávez braved a heavily drunk father and a disapproving mother and made his way into boxing against all odds. De La Hoya began his career as a fighter at the age of six in his uncle’s garage and survived one of the rougher parts of Los Angeles, where as a scrawny boy he was often bullied by neighborhood troublemakers.

Emotionally invested in their youth, “La Guerra Civil” feels all the more meaningful as it follows both men to their legendary status today through stunning archival footage that includes numerous notable fights – from Chávez’s title-winning bouts against Mario “Azabache”. Martinez, Edwin “Chapo” Rosario and Roger Mayweather in the 1980s, through to De La Hoya’s win over Lamar Williams on his professional debut in 1992. There are also moving accounts of the athletes in the later stages of their careers, with Chávez’s struggles with addictions being a major one occupy part of the term.

The main event of “La Guerra Civil” – and what an attraction it is thanks to Longoria’s wealth of footage – is the ultimate glory duel between Chávez and De La Hoya in 1996. And what sports movie would feel complete without a practice montage ? Several are included leading up to the big fight, with one playfully checking the name of Mr. Miyagi from “The Karate Kid”. No spoilers to be revealed, De La Hoya ultimately clinched victory, leaving Chávez with a slashed eyebrow and bruised ego.

But you would be wrong to assume that their saga ends there. Often branded with the derogatory term “pocho” (roughly an outsider not fluent in Spanish or Mexican culture), de La Hoya never really got the approval he sought from Chávez and the Mexicans on either side of the border . “There was no passing of the torch,” laments De La Hoya, who wanted nothing more than to prove his legitimacy as a Mexican. Ultimately, the duo fought again two years later in another bout that De La Hoya added to his wins – but this time with Chávez’s blessing. Their retelling of that moment adds distinct clout to a spirited documentary already full of them.