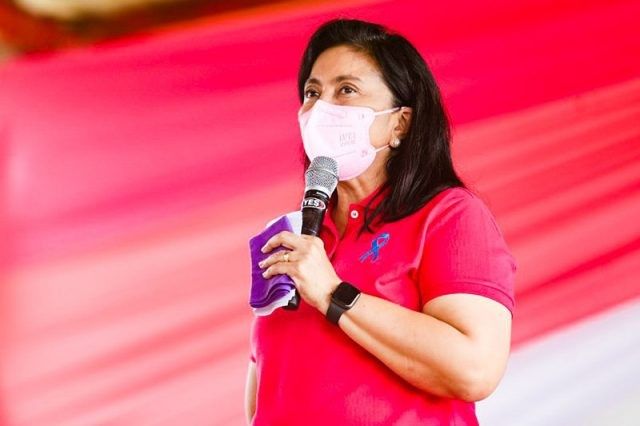 MANILA, Philippines – Presidential candidate and Vice President Leni Robredo said Friday she is open to amending the economic provisions in the constitution to allow more foreign investment into the country.

“I’m very open to considering any proposed constitutional amendment that would remove current obstacles thrown in our way, as long as we ensure the process is open and transparent and that people have an opportunity to participate,” said Robredo in a forum on economic reforms.

The 1987 Constitution restricts foreign investment in natural resources, public utilities, education, media, and advertising to varying degrees by requiring either at least 60% Filipino or 100% Filipino ownership of companies in these industries.

Introducing changes to these rules has been debated at length in Congress, with the latest push coming from the House of Representatives led by Speaker Lord Allan Velasco tried to submit amendments that would allow Congress to tweak these constitutional restrictions.

Velasco and his allies in the House of Representatives argued that foreign investment needed to flow into the country as its economy was hit hard by the COVID-19 pandemic, arguably requiring changes to the constitution’s economic provisions.

However, the proposal was unsuccessful because senators were reluctant to make changes to the constitution, according to Senate President Tito Sotto.

When Velasco renewed the push to amend the constitution, Robredo said on her weekly radio show that lawmakers should do it instead focus on legislation that could help the country respond better of the pandemic and recover from its effects.

“We passed the Anti-Terrorism Act and ABS-CBN was shut down amid the pandemic and now we’re pushing for a charter change? Haven’t we learned to focus our energy and attention on things that would not burden our people?” she then said in Filipino.

Now Robredo says “pressing concerns” about protectionist provisions on foreign capital can be addressed without the need to change the Constitution by amending the Public Service Act or Commonwealth Act No. 146.

The legislative amendments, passed by the House of Representatives in March 2020 and the Senate in December 2021, aim to narrow the definition of what is a public entity, which the constitution requires at least 60% Filipino ownership.

But the proposal has yet to be sent to President Rodrigo Duterte for signature as the House and Senate have yet to settle differences between their amendments to the Civil Service Act.

On the one hand, the Senate version wants to introduce more protective measures that Robredo supports.

“I hope strong security will be in place during the bicam and during the deliberations to protect our national interests and the well-being of the Filipino people,” she said.

So far, the Philippines has managed to ease some of its toughest restrictions on foreign investment after Duterte signed Republic Act 11595 last month, amending the Retail Trade Liberalization Act of 2000. The new law reduced the minimum capital requirement for foreign retailers to P 25 million pesos ($490,000) from $2.5 million, making it easier for these companies to open their businesses in the Philippines.