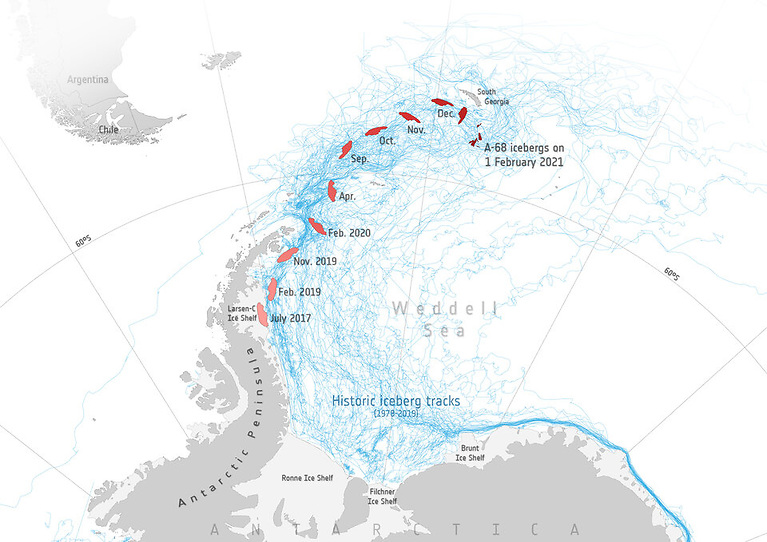 A giant iceberg that broke off Antarctica’s Larsen C Ice Shelf about three and a half years ago shrank towards the end of its drift across the Southern Ocean but released 152 billion tons of freshwater.

The European Space Agency (ESA) says scientists have mapped the fate of A-68A, which had a surface area more than twice the size of Luxemburg – one of the largest icebergs of all time.

Antarctic icebergs are named for the Antarctic quadrant in which they were originally sighted, then a sequential number, and if the iceberg breaks, a sequential letter is added.

For the first two years of its life, A-68A stayed close to its parent ice shelf in the frigid waters of the Weddell Sea, where it experienced little melting, according to ESA.

However, as the mountain began its journey north across the Drake Passage, it traveled through increasingly warmer water and began to melt.

The A-68 Iceberg Journey

To track how A-68A’s area has changed, the scientists used images from five satellites. The newly released study states that A-68A only briefly collided with the seabed and broke up shortly thereafter, making it less of a risk of blockage.

By the time it reached the shallow waters around South Georgia, the iceberg’s keel had reduced to 141 meters below sea level, shallow enough to just skirt the roughly 150-meter-deep sea floor.

“If the keel of an iceberg is too deep, it can get stuck on the sea floor. This can be disruptive in many ways; The scour tracks can destroy fauna, and the mountain itself can block ocean currents and feeding routes for predators,” says ESA.

“One side effect of the melting, however, was the release of a whopping 152 billion tons of freshwater near the island — a disturbance that could have profound effects on the island’s marine habitat,” it said.