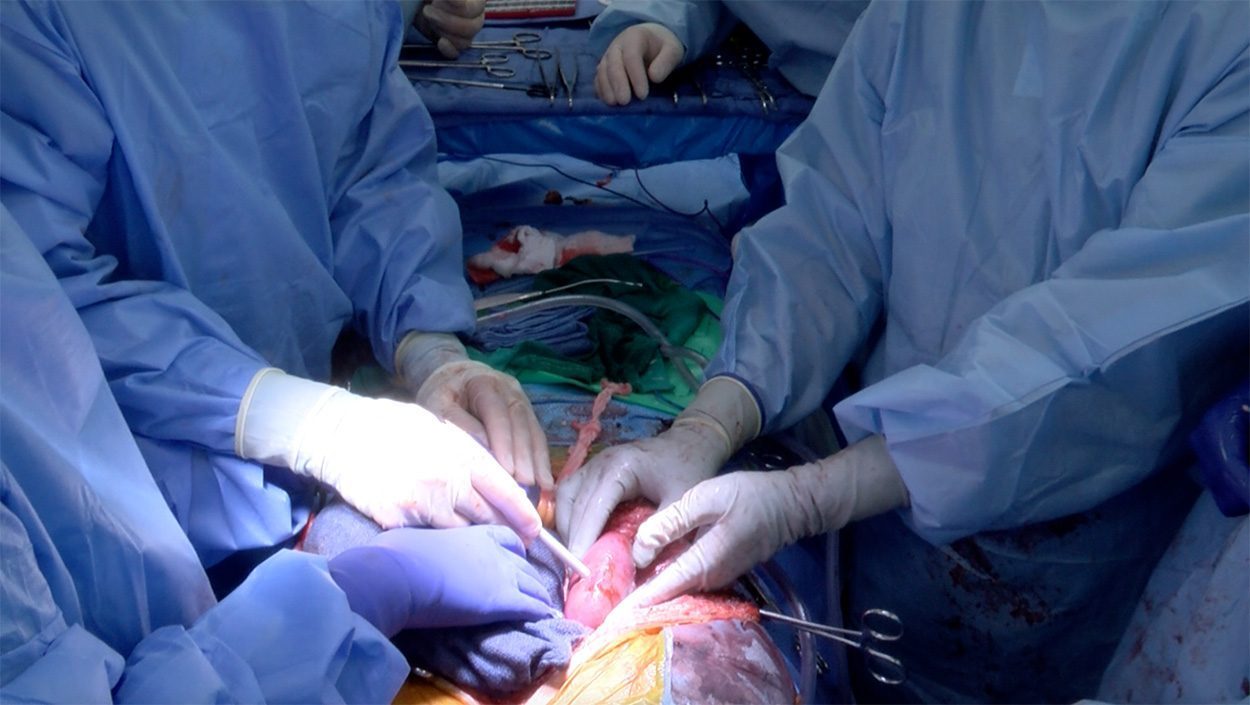 Given the shortage of human donor organs, scientists are exploring ways to transplant organs from animals into humans. To gather data on feasibility and safety, researchers have now taken an unconventional approach: they transplanted two pig kidneys into a brain-dead human recipient. Thanks to genetic modifications in the donor pig, the kidneys were not rejected. In addition, they produced urine after a short time – even if their filter performance was still insufficient. The results pave the way for transplants into living people.

Many seriously ill people around the world are waiting in vain for a donor organ: the waiting lists are long and the number of donor organs is small. Researchers have therefore been looking for ways to use animal organs for humans for a long time. Recent advances in genetic engineering meanwhile make it possible to modify the donor animals – mostly pigs – in such a way that the human body does not reject the animal organ. In January 2022, a pig heart was successfully transplanted into a human patient who would have died without the donor organ. However, there are still many unanswered questions about the feasibility and safety of such xenotransplantations.

Brain dead as a model organism

For ethical reasons, such questions cannot usually be answered on living people. Especially in cases in which the patient can live without the donor organ – for example through dialysis in the case of kidney damage – it would not be justifiable to take the risk of a xenotransplantation without further safety studies. However, animal models only have a very limited significance.

A team led by Paige Porrett from the University of Alabama at Birmingham is now reporting an unconventional solution to this problem: They used a brain-dead human as a “model organism” for a kidney transplant from a pig to a human. “Although a brain-dead body represents a hostile environment for the transplanted organ and thus only a limited assessment of kidney function is possible, the model makes it possible to better assess numerous risks,” the researchers explain. “This makes it easier to develop phase 1 clinical trials in living people in the future.

The organ recipient was a 57-year-old man who, before his death, had declared that he wanted to donate his organs for transplantation and research. With the consent of the relatives, the researchers chose him for their study. After his brain death in autumn 2021, they maintained his vital functions mechanically, removed both kidneys from the brain-dead recipient and transplanted him with the kidneys of a 13-month-old pig that had been bred specifically for organ donation.

To prevent the pig kidneys from being rejected in the human body, the donor pig was genetically modified: the researchers switched off four pig genes, including three that cause an antibody reaction in the human immune system and one that would be responsible for excessive tissue growth. They also inserted six human genes to prevent rejection. In order to be able to assess in advance whether the human immune system would accept the new organs, they carried out a so-called crossmatch to ensure that the recipient’s blood serum contained no antibodies against the donor tissue.

In fact, the researchers managed to transplant the pig kidneys into the human recipient without acute rejection. “The kidney turned a nice pink color and within 23 minutes it started producing urine,” says Porrett’s colleague Jayme Locke. The kidneys remained viable until the experiment was terminated at 74 hours. As hoped, the researchers found no pig-derived cells in the recipient’s blood, and no evidence that retroviruses had been transmitted from the pig to the human recipient.

“Our study suggests that the key barriers to human xenotransplantation have been overcome,” the researchers say. At the same time, the study also makes it clear that other questions remain unanswered. The researchers discovered tiny blood clots in tissue samples from the transplanted kidneys, the causes and significance of which have not yet been fully clarified. The function of the kidneys was also not quite as hoped: Although the transplanted organs produced urine, they failed to filter out creatinine from the blood, which is an important task of healthy kidneys. According to the researchers, one possible reason for this is that the kidneys in a brain-dead body could not work as well as they could in a living recipient.

“Trying to determine function in the face of brain death will always be a challenge,” Locke said. “Ultimately, we need to conduct a phase I clinical trial in which we transplant kidneys into a living human where conditions are more favorable for the kidneys to recover.”