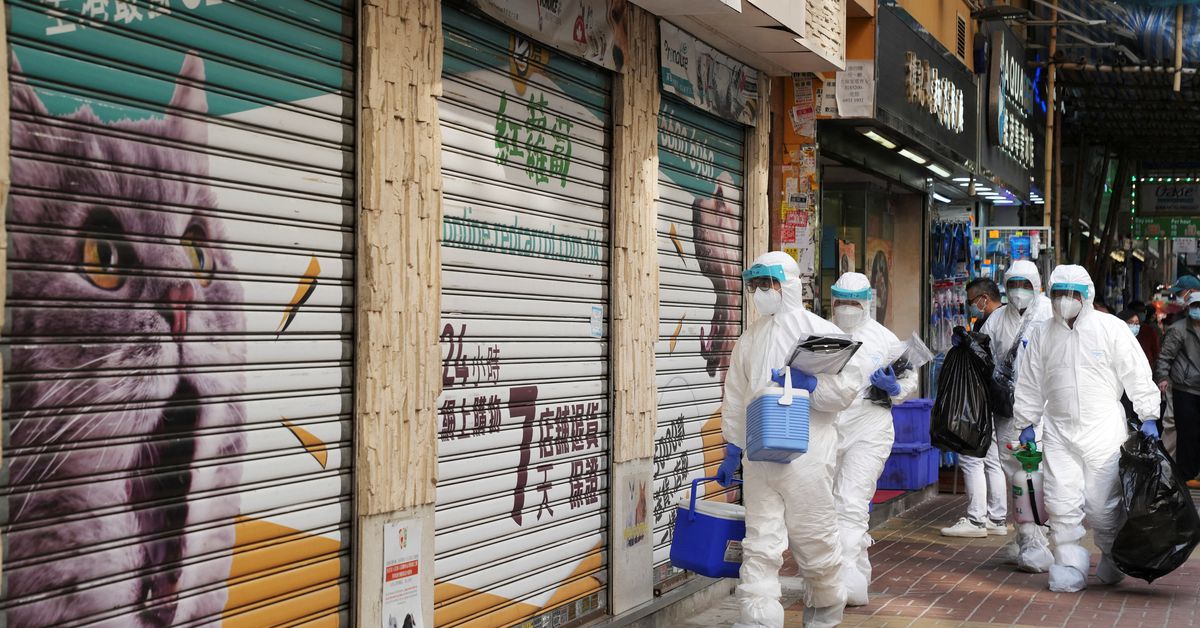 Authorities on Tuesday ordered the culling of 2,000 hamsters from dozens of pet shops and storage facilities after tracing a coronavirus outbreak to a worker at the Little Boss pet shop, where 11 hamsters subsequently tested positive for COVID-19.

Scientists around the world and Hong Kong’s health and veterinary authorities said there was no evidence animals play an important role in human infection with the coronavirus.

But after adopting a zero-tolerance policy for COVID-19, Health Minister Sophia Chan said on Tuesday she couldn’t rule out possibilities of transmission and therefore the government couldn’t take any chances.

Soon after, health workers in hazmat suits were seen coming out of pet shops across the city, carrying red plastic bags into their vans. Around 150 pet shop customers were quarantined.

Public broadcaster RTHK said some hamster owners were seen dropping off their pets at a government facility in the New Territories, while groups quickly formed on social media to find new owners for unwanted rodents.

Ocean, 29, a hamster owner and admin of the Hong Kong the Cute Hamster Group on the Telegram social media app, said the group has been contacted by nearly 3,000 people willing to temporarily care for unwanted animals .

Three young owners were pressured by their families to get rid of their hamsters, even though they’ve all owned them for more than half a year, said Ocean, who declined to give her last name because she feared angry reactions from those who wanted to cull them supported.

“Many pet owners don’t know the exact risks and give up their hamsters,” she says.

Bowie, 27, one of the volunteers in the group, is now the owner of two new hamsters.

“This is ridiculous,” said Bowie, who already owned three other hamsters. “Animal life is also life. Today it can be hamsters or rabbits, tomorrow cats or dogs.”

Officials in hazmat suits walk in front of a closed pet shop in Mong Kok district after a hamster cull was ordered in Hong Kong, China, January 19, 2022 to contain the outbreak of the coronavirus disease (COVID-19). REUTERS/Lam Yik

The local Society for the Prevention of Cruelty to Animals (SPCA), which runs veterinary clinics, told Reuters “numerous” concerned pet owners have reached out to them for advice.

“We urge pet owners not to panic or abandon their pets,” the SPCA said in a statement.

SPCA listed ways to maintain strict personal hygiene for human and animal safety, including never kissing, coughing, or sniffing around pets, and washing hands after handling them.

The average lifespan of a hamster is about two years, according to animal welfare organizations.

Aside from ordering the culling, authorities have ordered dozens of pet shops to close while importing and selling small mammals has been suspended. Buyers of hamsters after December 22, 2021 have been asked to hand them over to the authorities for culling and not leave them on the street.

The authorities have set up a hotline for inquiries. It was unclear how many hamsters had been handed over.

Most Hong Kong newspapers on Wednesday featured images of people in hazmat suits outside pet shops and illustrations of hamsters on their front pages, with Ta Kung Pao Daily showing a tiny rodent inside a spiked virus particle.

Vanessa Barrs, a professor of pet health at the City University of Hong Kong, said the move to kill the hamsters offered for sale could be justified on public health grounds, but fears of infection at home were overblown.

“Millions of people around the world have pets, and there have been no documented cases of pets transmitting infections to other people,” Barrs said.

“The theoretical risk is there, but it just doesn’t happen.”