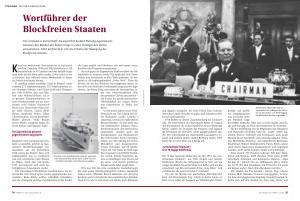 Tito masterfully understood how to turn Yugoslavia’s actually precarious position between the blocs of the Cold War into a strategic advantage. In 1961 he made a name for himself as the initiator of the Non-Aligned Movement.

Hardly any important statesman traveled as much as Tito. Between 1944 and 1980 he made 169 state visits to 92 countries and was therefore out of the country for a total of more than three years. He never seemed to fear that a coup might take place while he was away at home.

He also received numerous guests in Belgrade, including 175 heads of state, 110 prime ministers and hundreds of ministers and leaders of political movements. He invited many politicians, as well as stage and Hollywood stars, to his summer residence on the Croatian island of Brijuni (Brioni in Italian) for private gatherings. Among them were Emperor Haile Selassie, Gamal Abdel Nasser, Jawaharlal Nehru, Nikita Khrushchev, Leonid Brezhnev, Walter Ulbricht, Willy Brandt, Orson Welles, Josephine Baker, Richard Burton and Elizabeth Taylor…

© back then.de – Editorial team back then