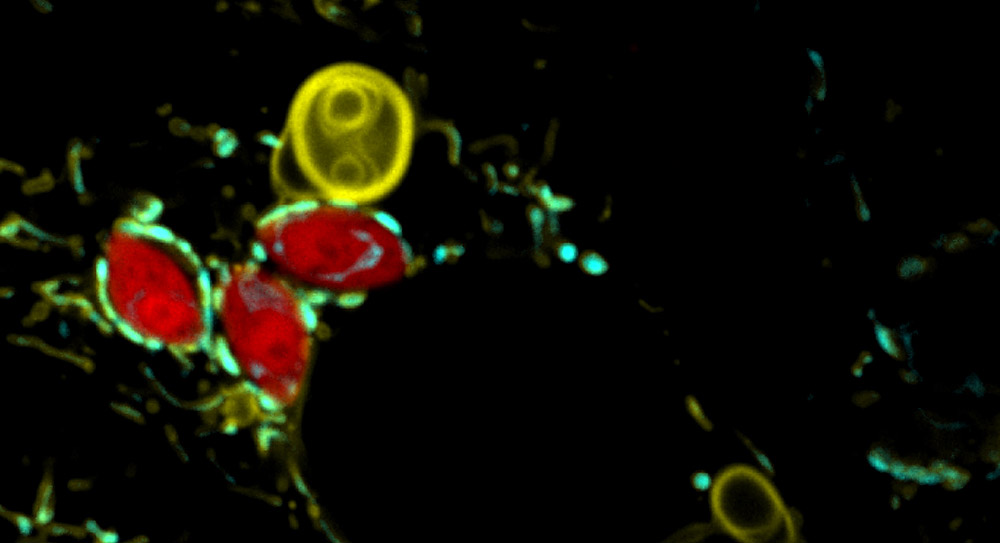 Hidden effect: If we are infected by the corona virus or another pathogen, they also attack the power plants of our cells – the mitochondria. As researchers have observed using the example of the toxoplasmosis pathogen, large parts of the outer mitochondrial membrane detach just a few hours after infection. The reason for this is a stress reaction of the cell power plants: They try to protect themselves in this way, but only harm themselves, as the team reports in “Science”.

Mitochondria are the power plants and batteries of our cells. They produce the chemical energy carrier of our metabolism in the form of the molecule adenosine triphosphate (ATP) and are therefore crucial for the function of all cells, tissues and organs. Inside, the mitochondria are divided into many subunits that function independently of one another and that are constantly and flexibly changing their shape. Its outer membrane, on the other hand, is used for exchange with the cellular environment.

Look inside the infected cell

But what happens when a cell is attacked by a pathogen – be it a bacterium, a unicellular parasite or a virus like the coronavirus SARS-CoV-2? It is known that viruses in particular drastically remodel the cell components in order to optimize their reproduction. In contrast, the mitochondria become active by triggering immune reactions and depriving pathogens of the nutrients they need for their growth.

Xianhe Li from the Max Planck Institute for Biology of Aging in Cologne and his colleagues have now examined the consequences of this confrontation for the cell power plants in more detail. “We wanted to know how else the behavior of the mitochondria changes when mitochondria and pathogens meet in the cell. Since the outer membrane of these organelles is the first point of contact with the invaders, we took a closer look at them,” explains senior author and Li’s colleague Lena Pernas.

Mitochondria give off large “blobs”.

For their study, the research team infected mouse cells marked with fluorescent proteins with the unicellular parasite Toxoplasma gondii, the causative agent of toxoplasmosis. They then observe what happens to the mitochondria under the microscope. “We saw that mitochondria that came into contact with the parasite detached large structures from their outer membrane,” reports Li. These detached lobes were visible as large, elliptical structures in the cells just six hours after infection.

But what was it? “The large diameter and lack of mitochondrial matrix proteins in these structures suggested that they were not fragments of whole mitochondria, nor the bubbles that mitochondria normally form in response to toxins and oxidative stress,” the team explains. “Instead, these are other, independently formed structures that are shed from the mitochondrial outer membrane.”

More detailed analyzes revealed that the pathogen produces a protein that binds to a receptor on the outer mitochondrial membrane. As a result, the function of several proteins in the cell power plant is altered, thereby suppressing its defense against pathogens, as the researchers found out. “The parasite hijacks a normal host response to mitochondrial stress. This leads to a disarming of the mitochondria,” explains Pernas.

In a similar way, other pathogens such as the SARS-CoV-2 coronavirus could also overturn the intracellular defense reaction of the mitochondria. “Other researchers have shown that a protein of the SARS-CoV-2 virus also binds to this transport receptor,” says the researcher. “However, more research is needed to better understand its role in various infections.” (Science, 2022; doi: 10.1126/science.abi4343)