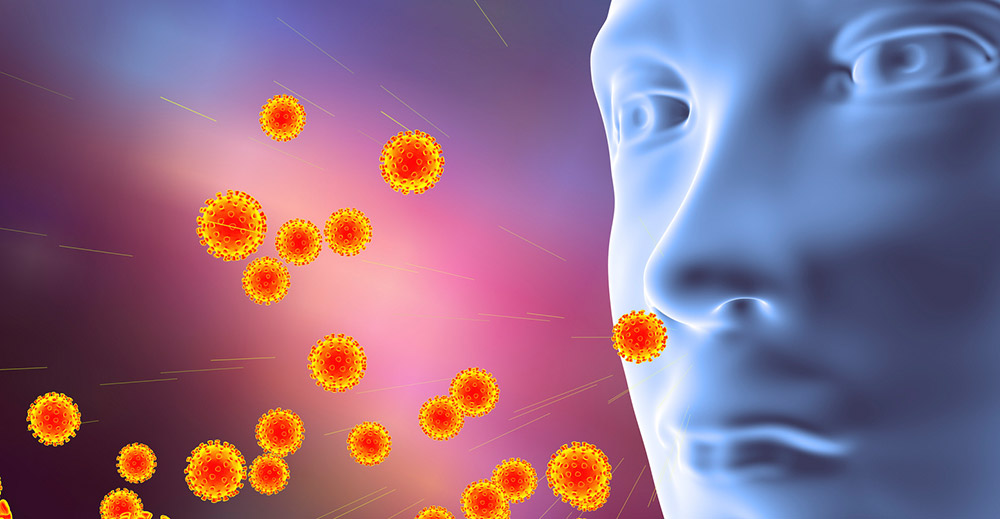 Whether or not a person develops an olfactory disorder with a coronavirus infection apparently also depends on the genes, as a comparative study with almost 70,000 participants now suggests. According to this, variants in the vicinity of two specific genes can increase the risk of a loss of the sense of smell. Both genes contain building instructions for enzymes that are closely linked to the olfactory process, as the researchers report in the journal “Nature Genetics”.

The temporary loss of the sense of smell and taste was considered a typical sign of infection with the coronavirus SARS-CoV-2 early in the corona pandemic. Those affected suddenly no longer smell anything or perceive everyday smells in a completely different way. It is fitting that the nasal mucosa is one of the first tissues to be affected by the virus in the event of an infection. However, the latest studies suggest that SARS-CoV-2 does not infect and damage the olfactory cells themselves, but the adjacent supporting and ciliated cells.

How and why olfactory disorders occur so frequently with Covid-19 is therefore still unclear. It is also unclear why these impairments of the sense of smell and taste do not occur in all corona infected people.

Looking for an answer, Janie Shelton and her colleagues at the US genetic analysis company 23andMe have now conducted a genome-wide comparative study (GWAS) in 69,841 people. All participants came from the USA or Great Britain and had already been infected with the corona virus. “Of those, 68 percent reported suffering from smell and taste deficits during their infection,” the team said.

To find out whether there are genetic risk factors for this Covid 19 symptom, the scientists compared gene variants in the entire genome of all participants. Using special algorithms, they searched for gene loci that were altered significantly more frequently in those affected by the loss of smell than in people without this symptom.

Significant changes in a gene locus

The result: A gene locus was changed significantly more frequently in the participants with corona-related olfactory disorders. This DNA section, which is around 44,600 base pairs long, comprised around 28 different variants, as the scientists report. From their data, they conclude that these variants increase the risk of losing the sense of smell by around eleven percent.

“Although the genetic association is clearest in the European population, the effect sizes are consistent across populations,” report Shelton and her colleagues. This is consistent with the fact that, according to the study, people of European descent are more likely to be affected by the loss of smell in Covid-19 than people with Asian or African ancestry.

More detailed analyzes revealed that the identified gene variants are close to the two genes UGT2A1 and UGT2A2. “These two genes are not only the closest, but also biologically plausible candidates,” say the team. Because these genes are mainly active in the mucous membrane cells of the nose and contain the building instructions for enzymes that play an important role in smell perception.

Specifically, these enzymes are responsible for binding to odorous substances that have already been detected and thus neutralizing them. As a result, these odorous substances become invisible to the olfactory receptors, so to speak, and these can prepare themselves to perceive new, additional scents. This is important so that scent stimuli do not get caught in the nose and block further perception of smells. The enzymes ensure that the odor impression disappears as soon as the triggering odor is no longer present in the environment.

But how does the coronavirus infection intervene in this process? And what role do the newly identified gene variants play in this? So far, the answer to this question is still open. “However, given their position and essential function, these genes could play a role in the physiology of the infected cells and ultimately result in the functional impairments that contribute to the loss of olfactory perception,” state Shelton and her colleagues.