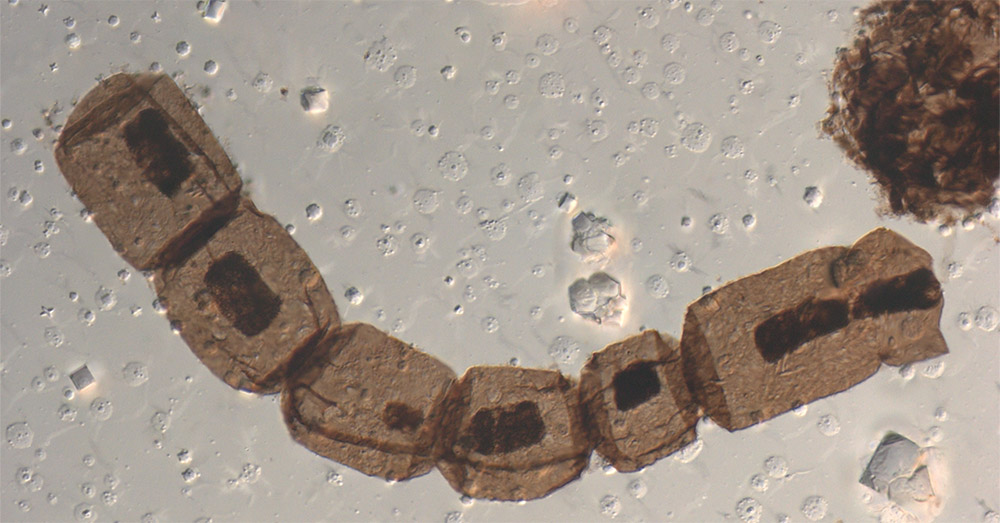 Pioneer in energy production: Researchers have discovered the fossils of one of the oldest eukaryotic algae. According to this, the multicellular alga Arctacellularia tetragonala was already using chlorophyll for photosynthesis a billion years ago. This detection was made possible by a newly developed method that can detect molecular chlorophyll residues in fossilized algae cells using X-ray fluorescence.

The remains of metabolites in fossils billions of years old can provide clues about how the fossilized organisms lived. Among these metabolites are, for example, so-called porphyrins – fossil remains of the light-harvesting molecule chlorophyll that were once produced by phototrophic organisms. Using such relics, researchers can gain insight into when organisms first began photosynthesis and to which tribal groups they belonged.

However, it is difficult to classify the chlorophyll relics: porphyrins have been discovered in layers of rock up to a billion years old, but have so far not been able to be linked to individual fossils – and thus to specific organisms. Because the porphyrins only form under favorable conditions and are destroyed again even if the fossils in the subsoil warm up slightly.

But a research team led by Marie Catherine Sforna from the University of Liège in Belgium has now managed to use a new method to identify porphyrins in cells of the fossil alga Arctacellularia tetragonala. To do this, they examined samples of microfossils found in compressed rock layers from the African Congo Basin that were around a billion years old.

A. Tetragonala was already a eukaryote

The fluorescence images showed specific accumulations of nickel in the compressed, fossilized cytoplasm of the ancient cells, the research team reports. “We identified these fragments as chlorophyll derivatives, which indicates that Arctacellularia tetragonala was a phototrophic eukaryote and thus one of the first true algae,” explains Sforna. Chlorophyll is the most important photosynthetic pigment of higher algae and plants and is therefore clear proof that the alga A. tetragonala was already a eukaryote.

Based on the complex cell structure, the researchers were also able to confirm that A. tetragonala, unlike the much older cyanobacteria, was already a eukaryote with a cell nucleus. Morphological studies showed multi-layered cell walls and large cells with multiple nuclei, so-called coenocytes, as they report.

A new window into the past

But how exactly does the chlorophyll actually develop into the nickel-porphyrin complexes that can be detected by researchers today? This development has mainly to do with the metal ions that bind the molecules. In their ring center, chlorophylls bind magnesium ions, which are exchanged for nickel ions over the course of thousands of years during the formation of porphyrins. This process – also called diagenesis – often takes place in petroleum, which supplies the necessary nickel ions.

With the newly developed method, scientists can now detect nickel porphyrins – and thus better understand the evolution of phototrophy in fossils. Thus, in the course of further investigations, the emergence of photosynthesis can possibly be traced back even further into the past than before. Furthermore, it is possible to more precisely decode the identity of previously mysterious microfossils, and thus the function of past ecosystems. (Nature Communications, 2022; doi: 10.1038/s41467-021-27810-7)

What: University of Liège