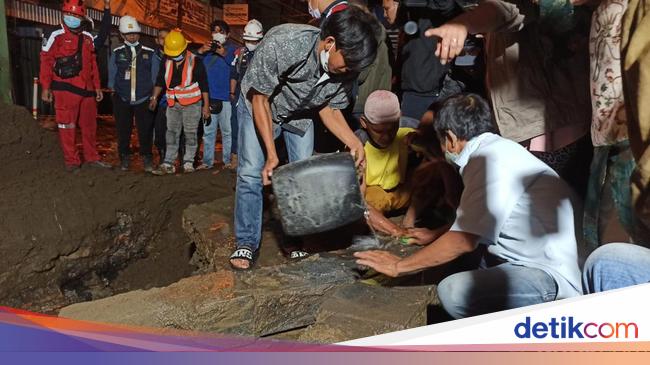 Nissan kuno written in Jawi script or Arabic-Malay, found by contractors working on the construction of a drainage network in the Ampera Bridge area of ​​Palembang, was promptly reburied. The ancient tombstone is now being dismantled again for research purposes.

“Yes, as a result of a meeting at the Office of the Cultural Service, it was agreed that the tombstone would be dismantled again for research purposes,” archaeologist at the South Sumatra Archeology Center, Retno Purwanti, told reporters on Monday (1/17/2022).

Based on observations in the area of ​​Ampera Bridge, Tengkuruk Permai Street, 16 Ilir Market, Ilir Timur I (one), Palembang at 20.00 WIB, the demolition was carried out by PT Waskita Karya. The heavy equipment demolition was observed by the Palembang Cultural Heritage Expert Team (TACB).

“Waskita Karya’s team gave us permission to come to TKP to witness the process of reappointing the buried tombstones,” said Retno, who also serves as chairman of TACB Palembang.

Fourth nisan kuno After being removed and cleaned, it is currently being temporarily placed in the Palembang Culture Service office. The tombstone is still being explored.

The inscription of the year 1322 Hijri or 1904 AD, approximately from the 19th or 20th century, is visible on the tombstone.

“This can be seen from the shape of the Demak Sultanate’s tombstone with the Jawi or Arabic-Malay script,” he said.

Previously, an ancient tombstone inscribed with Jawi or Arabic-Malay was found by a contractor for the construction of a drainage network in the Ampera Bridge area of ​​Palembang and immediately reburied. Manager PT Waskita Karya is suspected of violating the Cultural Preservation Act by failing to report the discovery of the ancient tomb.

However, after a meeting at the Palembang Culture Service (Disbud) on Monday afternoon (17 January) they found a ray of hope. The head of Palembang’s cultural bureau, Agus Rizal, said the incident was due to misinformation.