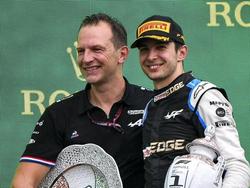 Formula 1 is facing the biggest season in its history this year. 23 races are on the program between mid-March and mid-November in just eight months. Does the premier class expect too much from their employees? Alpine CEO Laurent Rossi explains that this cannot be said in general terms.

“That’s a lot,” says Rossi, who primarily has the mechanics in mind. “At the same time, it’s great for the sport and drivers love it. If you offered them 40 races, they would probably race 40 times a year. Unless [an der Strecke] then they drive their karts or other things anyway,” he recalls.

However, it is about finding a Formula 1 calendar that is “sustainable” for all employees in the premier class, according to Rossi. In his opinion, with 23 races “the maximum” of what is reasonable has been reached. “The fewer double and triple headers we have, the better,” adds the Alpine CEO.

In principle, Rossi has no problem with the fact that more and more new routes are slipping into the calendar. “Personally, I think that raises the bar in terms of infrastructure,” he says, explaining that the new and modern tracks make older tracks look “a bit old and shabby.”

“It’s great to be at Spa, Monza and Silverstone. I love these races a lot,” he clarifies. At the same time, however, new routes such as in Miami are an incentive for the historic courses not to “rest on their laurels” and thus run the risk of possibly losing their place on the calendar.

And Rossi also welcomes the latest developments in Formula 1 apart from calendar planning. Sprint races, for example, are “a step in the right direction because they upgrade the show a bit,” says Rossi, who also explains: “The budget limit is the best thing happened to the sport.”

“Otherwise a lot of people would have given up and said: ‘I can’t make a billion even as a Renault [Euro] invest every year. I’m sorry, that doesn’t make any sense.’ I think the upper cost limit is great,” Rossi clarifies. The budget cap is intended to help Alpine catch up with the top.