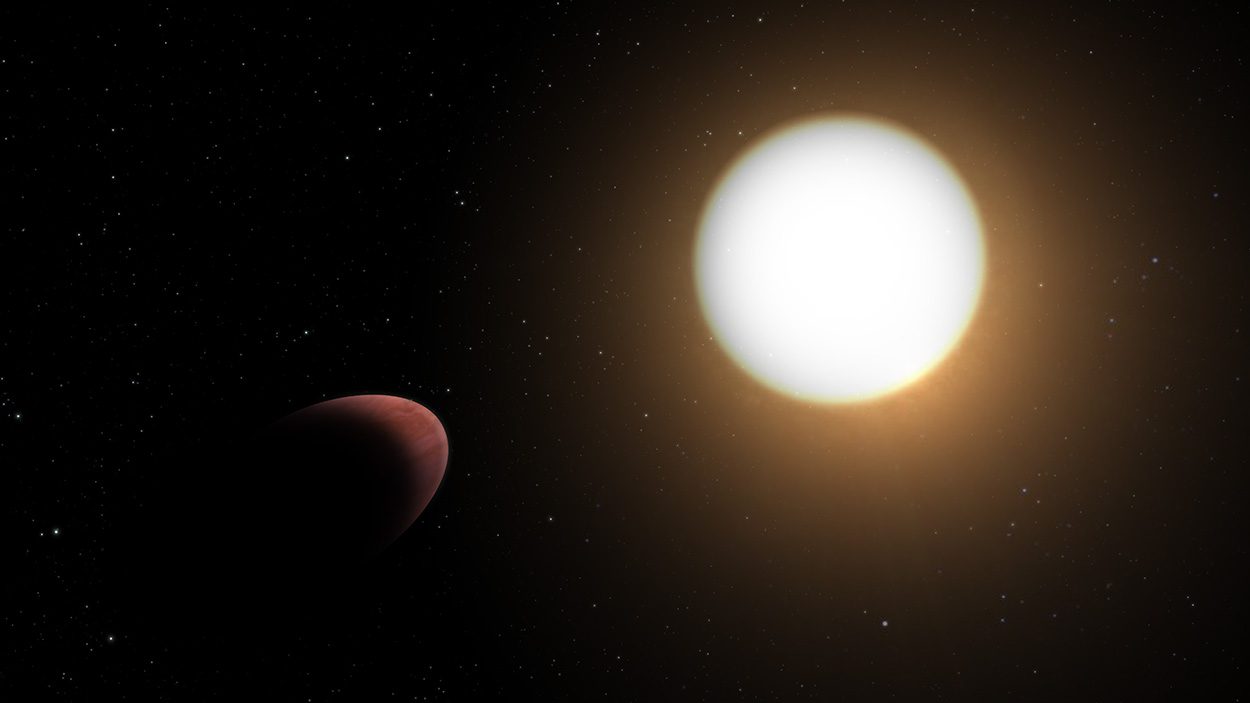 Usually planets are roughly spherical in shape, their own gravity pulls them into this shape. But there are exceptions – one of them is the exoplanet WASP-103b in the constellation Hercules. This planet orbits a bright star very closely and takes only one day to complete its orbit. Astronomers have now, for the first time, directly observed the consequences of this using the CHEOPS space telescope. The light curves of the transits of WASP-103b in front of its star reveal that the planet is badly deformed – the tidal forces of the nearby star pulled it apart like a rugby ball. The extent of this deformation also allows conclusions to be drawn about its internal composition.

We experience the effects of tidal forces on earth every day: The gravitational pull of the moon acts on the water of the oceans and creates ebb and flow. The sun’s influence of gravity also comes into play, albeit to a lesser extent because of its great distance. However, it is far more extreme when a planet orbits much closer to its star, as is the case with many so-called hot Jupiters – large gas planets whose orbits are very close to the star. Astronomers have long suspected that this proximity leads to extreme tidal forces on the planet. They could be so strong that they elliptically stretch and deform the entire planet. So far, however, it has never been possible to directly observe this effect.

To change this, an international team of astronomers led by Susana Barros from the University of Porto in Portugal took a closer look at some hot Jupiter with the CHEOPS space telescope. This telescope is designed to record the light curves of planetary transits in high resolution. Using the light curves, astronomers can then infer essential properties of the exoplanets. One of the targets of the measurement campaign was the planet WASP-103b, a hot Jupiter in the constellation Hercules, which is about twice as large and 1.5 times as heavy as Jupiter. It orbits a star that is around 200 degrees hotter and 1.7 times larger than our sun – but only takes just under a day to complete one orbit. WASP-103b is about fifty times closer to its star than Earth is to the sun.

“Because of its close proximity to its star, we had already suspected that very large tides would be caused on the planet. So far, however, we have not been able to prove this, ”explains co-author Yann Alibert from the University of Bern. But after the team had analyzed twelve transits of the planet with CHEOPS and also added data from the Hubble and Spitzer space telescopes, this changed: From the light curves, they could see that WASP-103b must be deformed. As a result of the strong tidal forces, it looks more like an elliptical rugby ball than a sphere. “It is incredible that CHEOPS was able to detect this small deformation,” says co-author Jacques Laskar from the observatory at the Sorbonne University in Paris. “This is the first time that such an analysis has been carried out.”

The results not only allow conclusions to be drawn about the shape of WASP-103b, but also about its interior. The team was also able to derive the so-called Love number from the planet’s transit light curve – a parameter that indicates how the mass is distributed within the planet. “A material’s resistance to deformation depends on its composition,” explains co-author Babatunde Akinsanmi from the University of Geneva. “By measuring how much the planet is deformed, we can therefore determine how much of it consists of rock, gas or water.” The evaluation showed that the Love number of WASP-103b is similar to that of Jupiter. The exoplanet must therefore have a similar structure to the gas giant in our solar system, but it is more bloated. What exactly caused this bloating is still unclear.

The influence of stellar gravity on the orbit of WASP-103b is also unclear. According to the theory, a planet at such a short distance from its star would have to be so strongly attracted that its orbit continues to narrow in a spiral. At some point the planet will come so close to its star that it will be torn apart and devoured by its gravity. In the case of WASP-103b, however, the team of astronomers could not find any clear indications of such a narrowing of the orbit – on the contrary. “There is evidence of a lengthening of the orbital period, which is contrary to expectations,” explain Barros and her colleagues. Whether the exoplanet is actually drifting away from its star or whether the data is due to statistical artifacts and other measurement-related distortions remains to be clarified.