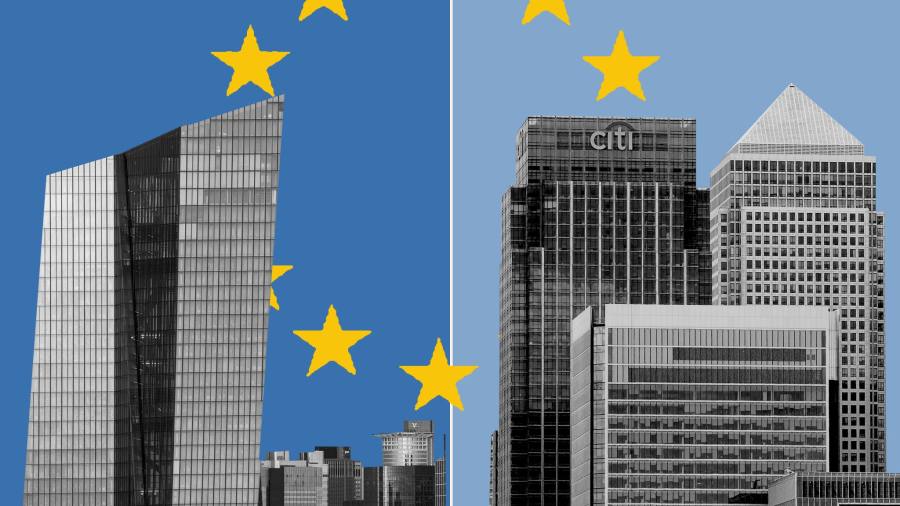 The European Central Bank intends to complete a detailed assessment of the way international banks manage their EU operations by early next year, which could lead to a confrontation with UK regulators over the location of senior staff and capital.

International banks fear that once the ECB completes its so-called desk mapping exercise – a detailed review of the way banks conduct theirs – they could face competing demands from Eurozone and UK regulators to structure their European businesses Have EU businesses in place, including where to find staff and capital.

The assessment aims to determine the extent to which banks are using various techniques to transfer risk from EU deals outside the bloc, particularly to the UK, where many had their European deals before Brexit.

One of these techniques involves the use of back-to-back models that allow banks to offset EU business with their London branches and effectively manage risk from the UK. Another is desk splitting, in which banks process EU customers or assets jointly from desks both on the continent and in the UK.

The assessment has already sparked high-level discussions between Eurozone and UK regulators after the Bank of England expressed concern that the ECB appears to be trying to “undermine” the operations of some of the major international banks in the UK, according to them a person who has been informed of The Reason.

The ECB has assured the BoE that the review is no different from similar ratings from other major central banks and is not asking banks to move more staff or capital out of the UK than they have already agreed to, the person said.

A second person familiar with the talks said the UK regulator did not expect to go “blind” from new demands to pull people and capital out of London.

The issue has been a sensitive one since the UK left the EU in January 2020 with no trade deal for the financial services sector. Most international banks prefer to keep as much of their investment banking and capital markets operations in London as possible in order to maximize efficiency.

By March 2020, according to the ECB, the banks had agreed to move more than 1.2 trillion euros in assets from the UK to their offshoots in the euro zone, quadrupling their volume in terms of assets compared to the end of 2017.

Even so, the ECB has since amplified his calls for banks to add hundreds of additional staff and billions of additional capital for their post-Brexit operations in continental Europe.

This has created tension with the Prudential Regulation Authority and the Financial Conduct Authority. A UK regulator told the Financial Times that while there is “really strong technical collaboration” with their counterparts in Frankfurt, “the policy is difficult”.

UK after the Brexit newsletter

Stay up to date on the latest post-Brexit developments with original weekly insights from our Public Policy Editor Peter Foster and senior FT writers. Sign up here.

“We need to be vigilant to ensure that activities or resources are being moved that [presented as] Motivated by regulatory purposes, there is no cover for things that are motivated by industrial purposes, ”said the person.

In that case, UK regulators will “have a conversation with the company and say, ‘No, we don’t see this as justified,’” the person added. “We had to do that. . . We have to be very careful that, from our point of view, they do not do things that damage the market integrity. “

At a recent event, PRA director Sam Woods spoke said he was “relatively confident” about the extent of the movement to date, but it would be “unacceptable” if it escalated to a point where London risked being undermined.

The ECB has spent several months reviewing how banks with large business activities in the EU deal with clients and assets based in the bloc. She expects to share the results of her investigation with banks and regulators, including the BoE, over the next three months. It has not yet been decided whether the results will be published.

Some banks believe that the exercise will result in having to significantly increase their presence in the EU.

The position of the Frankfurt Institute was underscored last month by Edouard Fernandez-Bollo, member of the ECB’s supervisory board, when he said that “empty shell institutions are unacceptable in the euro area”. He added: “Activities and services with EU customers should be carried out predominantly within the EU.”

The ECB declined to comment on the tension related to the exercise, as did the PRA.