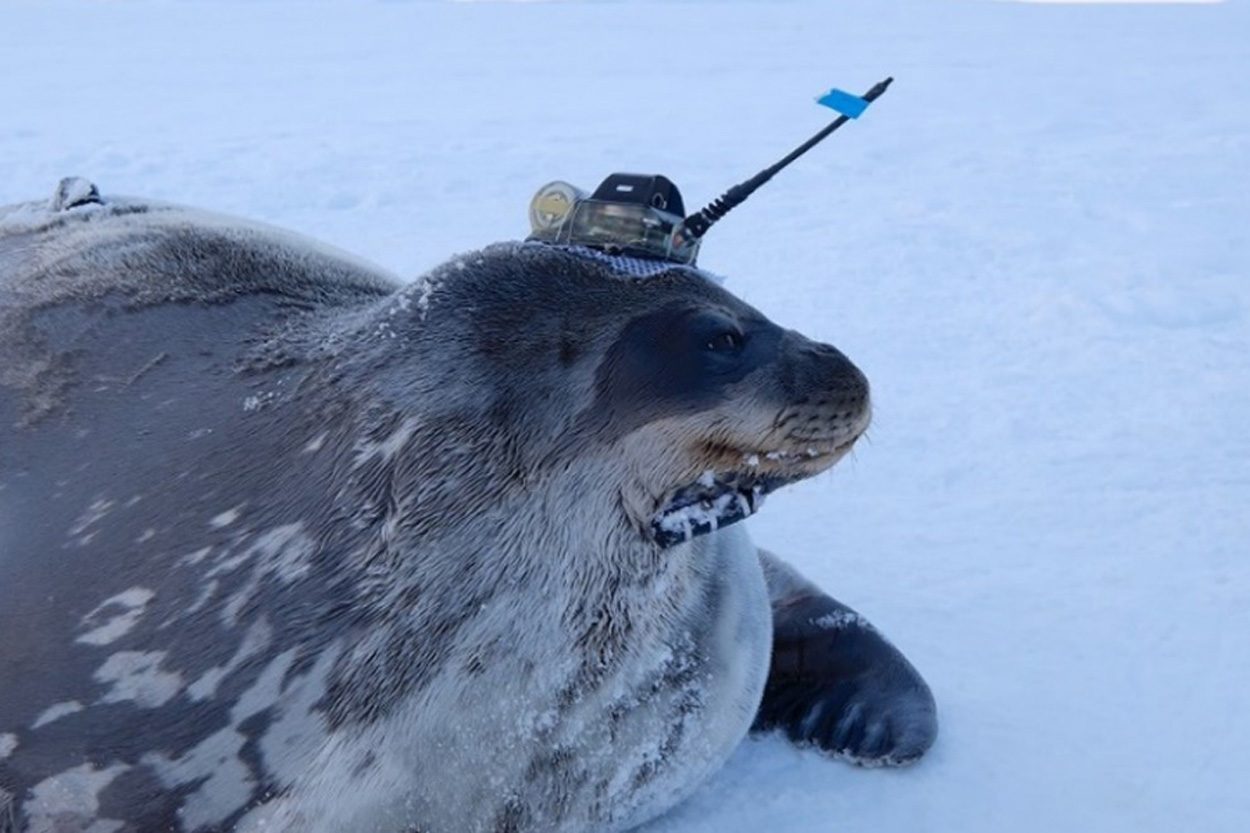 Research vessels cannot penetrate many marine areas on the Antarctic continental shelf due to the ice clinging to the coast. Thanks to animal helpers, researchers have now managed to collect valuable data on ocean circulation in these regions: eight seals carried sensors with them over several months that measured the salinity, temperature and depth of the water. The results show: In the Antarctic autumn, warm surface water passes under the ice shelf due to easterly winds. This affects the ecosystem, but also the ice.

The Antarctic continental shelves are one of the most biologically productive regions in the world’s oceans. The interactions between the ocean, sea ice and ice shelf produce large amounts of nutrients near the surface that nourish a multitude of living things – from microorganisms to mammals and birds. In order to better understand the physical and biological processes, researchers need more data on the ocean currents involved. However, many Antarctic shelf areas are covered by mainland ice, which makes research with the help of research vessels almost impossible – especially in the Antarctic winter from March to September.

A team led by Nobuo Kokubun from the National Polar Research Institute in Tokyo has now used another method of data collection: to explore particularly inaccessible areas of eastern Antarctica, they equipped eight Weddell seals native to this region with small measuring devices. “The devices collected hydrographic data as well as the diving behavior of the seals,” explain the researchers. “They sent this data to us by satellite when the seals came to the surface.”

Seven out of eight transmitters provided data for more than a month and showed that the seals initially migrated further east – up to 633 kilometers from their original position – and then in closer from June when the ice closes on the coasts hibernate in the delimited areas. These ice areas were previously unknown territory for researchers. “Previous studies with instruments attached to migrating southern elephant seals and resident Weddell seals have shown some interesting physical processes in Antarctic areas,” says Kokubun, “but even here there has been little study of coastal areas covered by ice shelves.”

Based on the data on the salinity, temperature and depth of the water, the researchers were able to differentiate between different types of water and assign where they came from – for example from melted ice shelves, from the surface of the water in other parts of the sea, from the large, cold body of water known as winter water , or from the depths, where the water is comparatively slightly warmer. They combined the measurement data with meteorological and oceanographic models.

The result: especially in the Antarctic autumn, easterly winds drive surface water with a low salt content from outside the shelf region into the coastal areas. These slightly warmer water masses bring a lot of nutrients and prey with them, and the researchers used the data to observe that the seals in these waters hunted particularly intensively. “Earlier studies emphasized the importance of warm deep water, which brings high nutrient concentrations with it,” the authors write. “Our study shows that warm Antarctic surface water also plays an important role and has a positive effect on food availability for top predators such as the Weddell seals.”

According to the researchers, their method with animal helpers may also be useful for future studies. “Our study shows that Weddell seals equipped with measuring devices are well suited to researching the oceanographic conditions and their biological effects on the continental shelf of the Antarctic,” the researchers said. In further studies, the team wants to shed more light on the physical and ecological processes in the region. They hope that this will also provide insights into how the Antarctic ecosystem reacts to the rapid changes in sea ice.