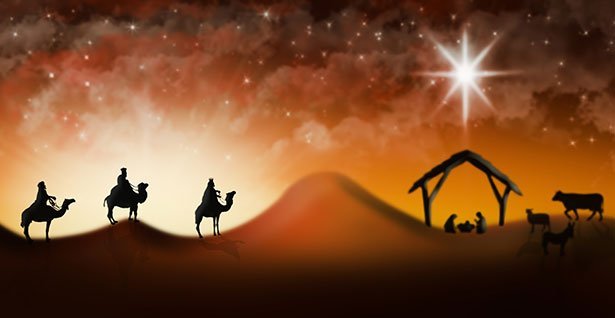 “And, behold, the star they had seen in the east went ahead of them until it arrived and stood still over the place where the child was.” For the Bible the thing is simple: the three wise men from the east discover you new star, follow him and arrive in Bethlehem shortly after the birth of Jesus. But what is it about the story? Did the star really exist or is it just a fictitious decoration of the Christmas story? Well-known historical astronomers such as Johannes Keppler, Edmond Halley and Isaak Newton have tried to clarify this – without resounding success. Because the solution to the riddle is more complicated than you might think.

“The question cannot be answered clearly today,” says Michael Geffert from the Argelander Institute for Astronomy at the University of Bonn. For one thing, one does not know exactly in which year Christ was born. On the other hand, the descriptions of the celestial phenomena that were observed at that time are not clear.

Jesus was not born in the year “zero”

As far as the historical Jesus of Nazareth is concerned, many historians now assume that he could actually only have been born between eight and four years before our era – and by no means in the year “zero”. Because the then king of Judea, Herod, died in the year four before Christ. In the biblical story, Herod plays an important role as a power-hungry child murderer, among other things. And the Roman governor Quirinius, because of whose census Joseph and Mary had to move to Bethlehem according to the Bible, ruled around 12 BC.

According to researchers, the “star”, on the other hand, must have been an object that appeared in the night sky at the time. “In addition to a ‘new star’, a supernova, it could of course also have been the appearance of a bright comet,” says Geffert. However, assuming that the wise men came from what is now Iran, it would have taken them many months to plan and conduct the trip. “That speaks against a supernova or a comet as an explanation,” says the Bonn researcher. Because both phenomena can usually only be seen for a few days or weeks.

Planetary conjunction as a “new star”?

The majority of astronomers therefore now favor a different theory: a three-way conjunction of the two planets Jupiter and Saturn. The two celestial objects come very close not just once, but three times in a row. To an observer, they seem to merge into a bright point of light. Such a three-way conjunction probably actually existed in the year 6 BC in the constellation Pisces. If the wise men had started planning their trip with the first conjunction, they could have been in Bethlehem by the third conjunction, Geffert estimates. There were only a few months between the three meetings of the two planets, so that there would have been enough time for the journey.

“In summary, one can say that a planetary conjunction is the most likely astronomical explanation for the star of Bethlehem,” says the astronomer. But one should not think that the scientists have found a clear explanation.

The three wise men did not exist

To this day, not all of the riddles about the Star of Bethlehem have been solved. But what about the three wise men from the Orient? Did they exist? In this regard, the theologian Wolfgang Weiß from the University of Oldenburg contradicts the astronomer Geffert. Of course there was no such thing. They are narrative figures, says Weiß. Possibly they symbolized the homage to Jesus by non-Jewish representatives.