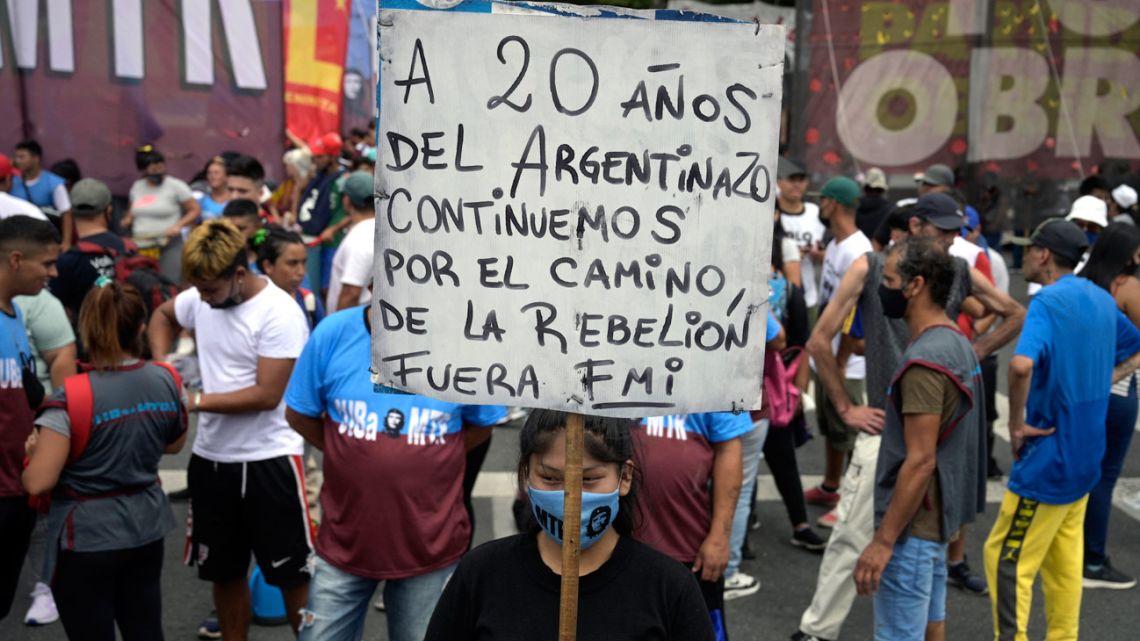 Argentina has long had a tumultuous relationship with the International Monetary Fund, which is viewed negatively by many in the country, despite the fact that it represents a loan guarantee after decades of “very poor public finance management”.

Twenty years after an economic, political and social crisis that rocked the country – and felt around the world – Argentina is now going through a tense financial crisis and has never fully regained the confidence of world markets.

With four in ten Argentines still living in poverty, the country is keen to avoid a repeat of the 2001 debacle.

Argentina is struggling in the midst of an economic recession with annual inflation exceeding 50 percent and depleted cash reserves as it refinances its latest loan, which was completed with the agency in 2018.

The country has gone to the IMF 21 times since joining in 1956, “so the new program is to be negotiated”. [to restructure a credit of US$44 billion] will be 22nd in 65 years, ”said Arturo Porzecanski, researcher at the Center for Latin American and Latino Studies at American University in Washington.

“It’s like saying that a bar owner has had to call the fire department 22 times in the past 65 years,” he said.

“Instead of controlling its own general debt, Argentina borrowed excessively domestically and internationally for years,” said Mark Sobel, US President of the Official Monetary and Financial Institutions Forum (OMFIF).

“The central bank is forced to fund deficits, which creates inflation and public distrust of the government and the currency.”

“Argentina is unable to pay its foreign debt and is a series default,” he added.

Experts agree that it would be a mistake to hold the IMF responsible for Argentina’s financial troubles.

“The cost, terms and size of any new program the IMF approves for Argentina will be much cheaper than the government could hope for from financial markets or other multilateral entities,” said Porzecanski.

After all, the fund’s interest rates are low.

“Now it’s two percent and with high debt it could reach four percent, but keep in mind that the interest rate Argentina could borrow in the market is maybe 15 percent,” said Claudio Loser, a former IMF director for America and CEO of the consulting firm Centennial Group Latin America.

Resentment against the finance agency is widespread among Argentina’s 45 million population, including President Alberto Fernández, who has called for more time to pay off the debt.

“Although the IMF has rescued Argentina repeatedly, it is a villain to many Argentines,” said Benjamin Gedan, assistant director of the Latin America program at the Wilson Center in Washington DC to bring about the 2001 economic collapse. “

Thousands of protesters yelled “Out with the IMF!” in the streets of Buenos Aires.

“The Argentines always focus on the fund and blame it for Argentina’s problems,” said Sobel. “But the decades and decades of Argentina’s bad economic policies were made in Buenos Aires, not Washington DC.”

Gedan agreed, saying, “Argentina’s fundamental problem is that spending is too high and the IMF cannot ignore the country’s failure to manage its national budget responsibly.”