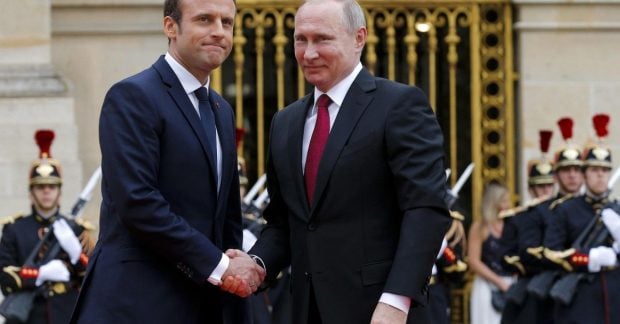 During a conversation with Macron, Putin said again that Ukraine was allegedly delaying the negotiation process.

Tuesday, December 21, the President of Russia Wladimir Putin spoke to French President Emmanuel Macron. During the conversation, the Russian head of state stated the conditions for a meeting in Normandy format to resolve the conflict in Donbass.

This was reported in the press service The Kremlin.

In a conversation with Macron, Putin in particular once again stated that Ukraine was allegedly delaying the negotiation process.

“The Russian President stressed that the possibility of holding a new Normandy-style summit depends on the concrete steps taken by the Kiev authorities to implement the Minsk package of measures,” the Kremlin said.

also read“That is not our choice”: Putin said the Russian Federation does not want bloodshedAt the same time, Putin has not specified exactly what “concrete steps” he expects from the Ukrainian side.

Macron and Putin also discussed Moscow’s so-called “security guarantees” in Europe. Putin briefed Macron on “the Russian diplomacy being pursued on this issue”.

Let us recall that last week Russia kept its “red lines” for NATO and the United States. These include demands on the alliance to refuse Ukraine’s membership, to accept Moscow’s approval of the deployment of troops in former communist countries in Europe and to avoid the stationing of armed forces or exercises in neighboring countries of the Russian Federation in the near future.

As UNIAN previously reported, German Defense Minister Christina Lambrecht said during her visit to Lithuania that The Russian Federation cannot “dictate” the NATO countrieswhat they should do in the context of regional security. “We have to talk to each other, that is, discuss Russia’s proposals. That is right and important. But it cannot be that Russia dictates to NATO partners how they should position themselves, ”said Lambrecht.

Russia against Ukraine’s move to NATO

Vladimir Putin considers Ukraine’s membership in NATO to be a “red line”. He said he would ask the alliance to guarantee that Ukraine would not join the alliance.

Biden refused to comply in talks with Putin on December 7th Kremlin set “red lines” on the possible membership of Ukraine in the alliance.

NATO Secretary General Jens Stoltenberg in turn confirmed that the Russian Federation has no right of veto against Ukraine’s membership in NATO. However, on December 9, he invited Russian representatives to a meeting of the NATO-RF Council against the backdrop of a deployment of Russian troops in Ukraine.

In Ukraine, they are convinced that Ukraine’s non-alignment will in no way diminish Putin’s “appetite”. President Volodymyr Zelenskyi stressed that Ukraine’s North Atlantic future would be decided by its people and not by Russia.