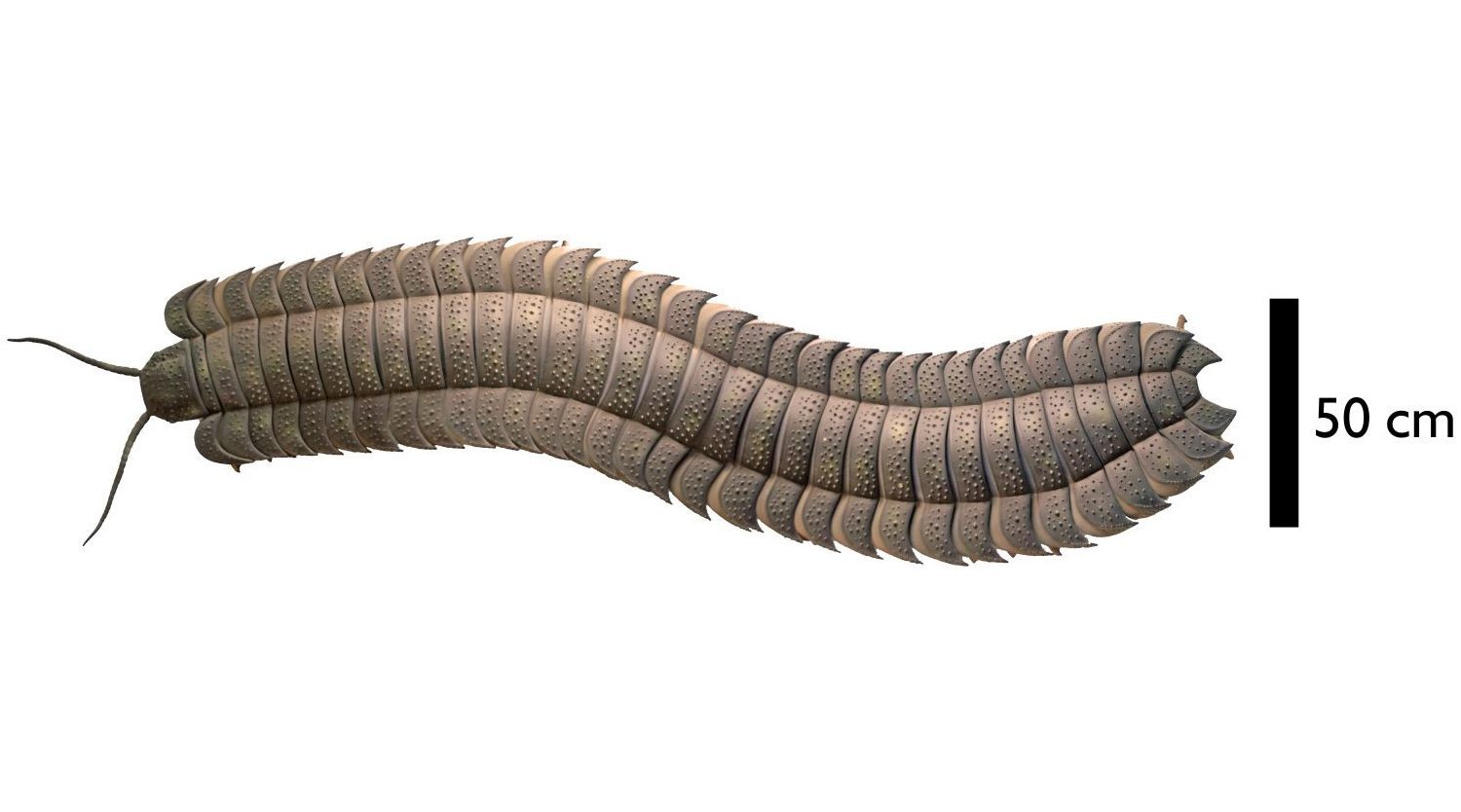 It was around 2.60 meters long, weighed 50 kilograms and crawled through present-day England around 326 million years ago: paleontologists have discovered fossils of the largest known specimen of an arthropleural arthropod. The find suggests that they became even larger than the largest primeval sea scorpions and trilobites. The arthropleura were therefore possibly the largest arthropods of all time. As before, the bizarre giant crawlers are still puzzling paleontologists.

Vertebrates are often the focus of our attention – but quantitatively speaking, another animal strain in the world is much more important: around 80 percent of all animal species today are arthropods. They include the insects, crustaceans, millipedes and arachnids. The development history of these beings goes back a long way and also includes extinct groups such as the trilobites and sea scorpions. What distinguishes all arthropods is an exoskeleton and a body structure that is characterized by segments.

This concept is more advantageous for smaller bodies, which is why most representatives of the arthropods are and were comparatively small. The fossil extreme examples for the upper limit of the marine arthropods are the sea scorpions and the arthropleura were already at the top of the land-living arthropods: These millipede-like creatures lived in the Carboniferous Age and then probably died out in the course of the Permian. Finds of parts of these creatures as well as traces assigned to them already suggested that they could have reached lengths of over two meters. The newly discovered remains of an arthropleura from around 326 million years ago are, however, significantly larger than those previously known and thus expand the scale again.

A record copy is emerging

The fossil was discovered in a large block of sandstone that fell from a cliff onto Howick Bay Beach in Northumberland. “It was an absolute coincidence,” says first author Neil Davies of the University of Cambridge. “The chunk broke open as a result of the fall, exposing the fossil perfectly so that it could be discovered by chance in passing”. It was already becoming apparent that it was literally a big find. Therefore, the fossil was brought to Cambridge for closer examination.

There, the paleontologists’ analyzes showed that it is a 75 centimeter long piece of the exoskeleton of an arthropleura. So far, two comparable finds are known, say the scientists. But the remains from Howick Bay come from a much larger specimen. Estimates based on the proportions of the segments found, the researchers came to a width of over half a meter. From this they in turn derive a total length of the animal of up to about 2.60 meters. In terms of weight, extrapolations based on the characteristics of today’s large millipede species showed a mass of about 50 kilograms. Comparisons with estimates of maximum sizes and weights of other giant arthropods suggest that Arthropleura was possibly not only the largest land arthropod of all time, but the largest representative of this group of animals as a whole.

How did the primeval giant live?

As the researchers also report, the new fossil also sheds light on other aspects of the mysterious prehistoric giant. There is evidence that the animal lived on the bank of a river around 326 million years ago. In contrast to the cool and humid weather associated with the region today, Northumberland had a tropical climate in the Carboniferous period, as the region was then near the equator.

According to the scientists, the new find is also the oldest evidence of arthropleura, which is connected with an interesting note: the enormous size of these creatures has so far been traced back to a peak in the oxygen concentration in the atmosphere during the late Carboniferous and Permian. But since the new fossil came from rock deposited before this peak, it now stands to reason that the oxygen supply may not have been a factor in the growth after all.

According to the researchers, at least one would assume that arthropleura would have to have had a very nutritious diet to reach that size. “We don’t know exactly what they ate, but there were nourishing seeds back then and maybe they were feeding on other invertebrates or amphibians,” says Davies. A part of the body could provide clues that have so far been missing: “No fossilized head has yet been found. Giant arthropod fossils are generally rare because their bodies seem to have disintegrated quickly after death, ”says Davies. According to him, it is also likely that the fossil is an exuvia – a molting sheath that the animal shed in the course of its growth. Hopefully paleontologists will one day come across more fossil remains that shed more light on the life of these spectacular primeval creatures.