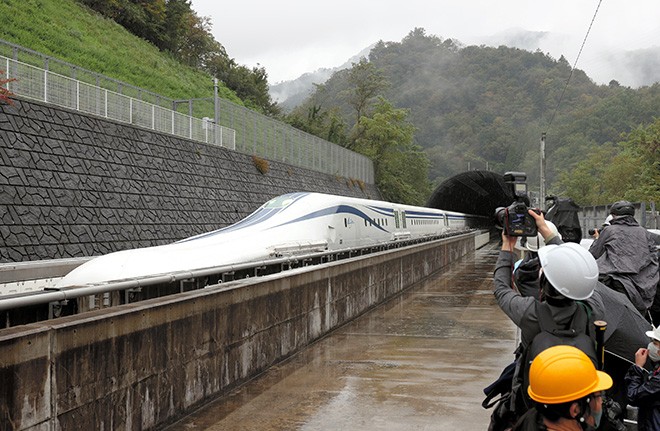 The Department of Transportation will shortly issue an administrative policy to Central Japan Railway Co. (JR Tokai) calling for close dialogue with Shizuoka Prefecture on a local section of the long-awaited maglev project.

It is unusual for the ministry to issue such a directive to an entrepreneur who has not broken any law.

The new maglev line is a major controversy in the prefecture amid concerns about how it could affect the environment and local water resources.

The ministry’s move came when a panel of experts, including scientists, prepared an interim report on December 19 that assessed the possible impact that building a tunnel under the Southern Japanese Alps could have on the volume of water in a Shizuoka river.

The Alps extend over the prefectures of Shizuoka, Yamanashi and Nagano.

JR Tokai originally planned to open the Chuo Shinkansen line between the capital’s Shinagawa Station and Nagoya Station in 2027.

However, Shizuoka Prefecture is refusing to approve the construction of the Shizuoka section, the only section yet to begin work.

Prefecture officials have raised concerns that the tunnel through the Alps would swell groundwater and lower water levels along the Oigawa River, which flows through the prefecture and supplies local households.

The panel’s interim report concluded that the water levels in the middle and lower reaches of the river would remain unchanged if all the water that bubbles up from the subsoil as a result of the construction works is returned to the river.

It found that an abundant groundwater source in the mountain can replenish any lost water that part of Shizuoka Prefecture fears could flow to neighboring Yamanashi Prefecture during construction.

The panel urged JR Tokai to continue making sincere efforts to allay the prefecture’s worries and fears as the residents of the Oigawa River Basin have suffered from water shortages in the past and the railway operator has so far failed to calm the locals .

It also said that JR Tokai should discuss with Shizuoka Prefecture and the affected communities how to get lost water back into the river.

However, the panel added that its assessment is not yet certain. It asked rail operators to monitor the groundwater to cater in the event of a sudden water leak and to make the data public to ensure transparency.

In response to the panel’s report, Transport Minister Tetsuo Saito plans to meet Shin Kaneko, president of JR Tokai, on December 21st to instruct the rail operator to respect the feelings of local residents and officials in moving forward with the project.

“The panel adequately reflected our concerns in the report,” Shizuoka Lieutenant Governor Takashi Namba said after the panel meeting on December 19.

He urged JR Tokai to make a thorough statement as the locals “have little confidence” in the railway operator.

“Our belief that we have responded sincerely to the matter remains unchanged,” said Mamoru Uno, executive vice president of JR Tokai. “We want to talk to Shizuoka Prefecture about it in order to dispel the worries and fears of the local people as much as possible.”

The panel will examine how reduced water levels in groundwater and rivers in the vicinity of the planned tunnel affect the ecosystem of the Alps and discuss ways of minimizing possible negative effects.

When JR Tokai will be able to start operating the Chuo Shinkansen line is still unclear. It is expected that Shizuoka Prefecture, after examining the results of these future panel discussions, will decide whether the railway operator is allowed to start construction.

(This article was written by Masanori Isobe, Susumu Imaizumi, and Shinya Takagi.)