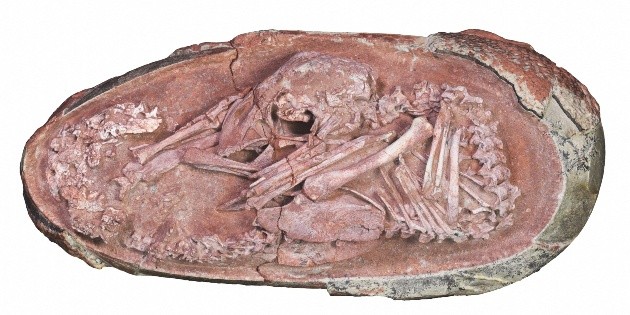 A team of researchers has managed to describe an embryo between 72 and 66 million years old “exquisitely preserved” inside a fossilized dinosaur egg, which sheds new light on the relationship between the behavior of modern birds and these extinct animals.

The embryo, nicknamed “Baby Yingliang”, was discovered in Ganzhou, in the south of China, and belongs to a toothless theropod dinosaur or ovirraptorosaurus; the fossil suggests that these dinosaurs developed postures similar to those of birds near hatching.

Scientists discovered that Baby Yingliang’s posture, one of the most complete dinosaur embryos ever found, is unique: Its head is under the body, with the feet on either side and the back curled along the blunt end of the egg.

This posture, hitherto unknown in dinosaurs, is similar to that of modern bird embryos., says a statement from the University of Birmingham (United Kingdom). In birds these postures are related to a behavior controlled by the central nervous system and essential for hatching success.

After studying the egg and the embryo, the researchers believe that this pre-hatching behavior, which until now was considered exclusive to birds, may have originated among non-avian theropods.

Led by experts from the University of Birmingham and of the China University of Geosciences (Beijing), the team, also made up of scientists from Canada, publishes the details in the magazine iScience.

The embryo is articulated without major alterations due to fossilization: with an estimated length of 27 centimeters from head to tail, the creature is inside an egg of 17 centimeters.

According to the magazine, the specimen was acquired in 2000 for Liang Liu, director of a company called Yingliang Group, which he suspected might contain egg fossils. But it ended up in storage, largely forgotten until about ten years later, when, during the construction of the Stone Natural History Museum from Yingliang, the staff sorted the boxes and unearthed the fossils; now is where you are.

“We are very excited about the discovery of Baby Yingliang, as it has been preserved in a great state and helps us answer many questions about the growth and reproduction of dinosaurs,” he stresses. Fion Waisum Ma.

“It is interesting to see that this dinosaur embryo and a chicken embryo pose similarly. inside the egg, possibly indicating similar behaviors before hatching. “

The Baby Yingliang was identified as an ovirraptorosaurus based on his deep, toothless skull; These are a group of feathered theropod dinosaurs, closely related to modern birds, known in the Cretaceous Asia Y North America.

Birds are known to develop a series of fold-over postures, in which they bend their bodies and tuck their heads under the wing shortly before hatching. Embryos that do not reach these positions are more likely to die because they were not born.

Comparing Baby Yingliang to the embryos of other theropods, long-necked sauropod dinosaurs, and birds, the team proposed that the behavior of fold, which was considered unique to birds, first evolved in theropod dinosaurs many tens or hundreds of millions of years ago.

Additional discoveries of embryo fossils would be invaluable in further testing this hypothesis, the researchers summarize.