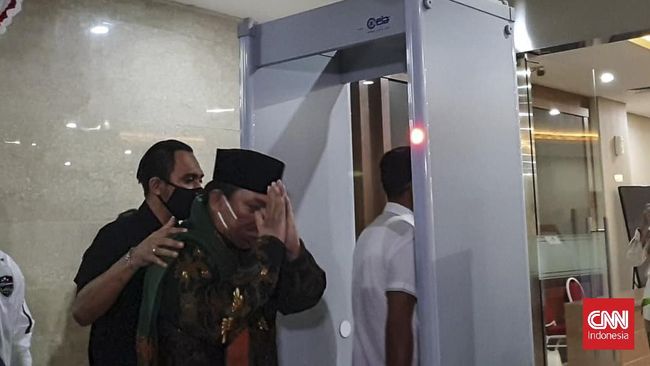 Accused in case of hate speech and blasphemy, Yahya Waloni admitted that his words in the lecture mentioned Gospel or the Bible is a fake and fictional book, just a joke or a joke.

However, he realized that the jokes he was making were too harsh and inappropriate ethical. So he apologized again for what he said.

“I was just kidding, but it turned out I was being rude. The ethics are really not, I apologize, ”said Yahya in a follow-up hearing on his case in the South Jakarta District Court on Tuesday (21/12).

Yahya admitted that his joke was also carried away by the emotions of the community, who responded with laughter at the time.

He admitted that in the speech he had overlooked some important names after Christianity. He turned the Holy Spirit into a scabies spirit, Stephen was turned into tetanus. Regardless, the jokes are apparently overflowing and provoking public anger.

“My motivation was only because it was supposed to be a joke. I just realized it worries people, ”he said.

On the other hand, Yahya did not know that his lecture was being broadcast live. Still, he realized that he shouldn’t have made that statement.

“As far as I know, it’s just the documentation from the person who recorded it,” he said.

Yahya also admitted that he had made similar statements in lecture sessions on different occasions and in different locations, including at the Kauman Mosque in Pekalongan, central Java.

“Have you ever lectured in other places like the Kauman Pekalongan Mosque?” Ask the prosecutor.

“Have the words ever slipped?”

Muhammad Yahya Waloni was charged with disseminating information aimed at inciting hatred based on ethnicity, religion, race and intergroup (SARA).

He violated Article 45A Paragraph 2 in conjunction with Article 28 Paragraph 2 of Law of the Republic of Indonesia No. 19 of 2016 amending Law No. 11 of 2008 on Information and Electronic Transactions in relation to the dissemination of information that causes hate.

Yahya was also charged under Article 156 of the Criminal Code for expressing hostility and hatred towards Indonesians.

Yahya’s statement was made on August 21, 2019 during a lecture at the Sudirman WTC mosque in central Jakarta. Yahya’s lecture was also uploaded to the mosque’s Youtube channel and was seen by many people.