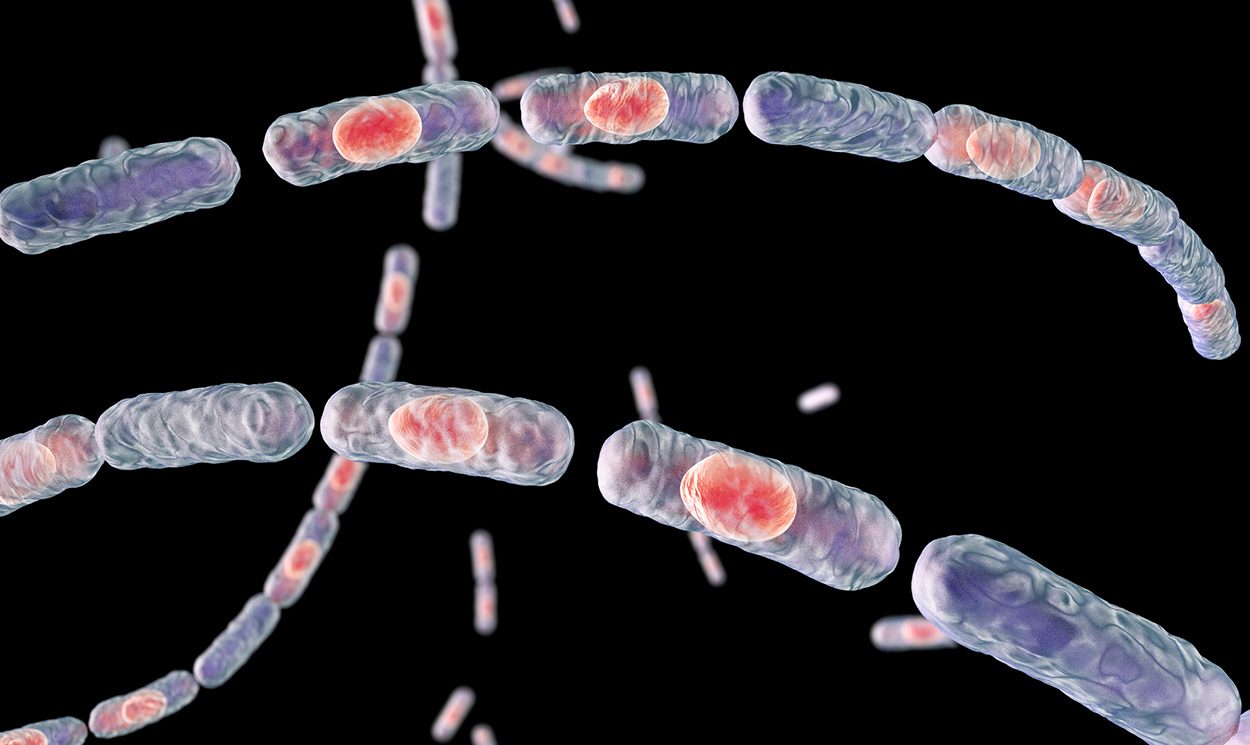 The venom of the anthrax pathogen Bacillus anthracis can be fatal, but it may also have medicinal benefits. A new study shows that of all things the nerve cells in the spinal cord, which are responsible for transmitting pain signals, have specific receptors for the toxin. In mice, injection of components of the poison made them temporarily insensitive to various types of pain – without any systemic side effects. The findings could provide a basis for developing novel pain therapies.

The anthrax pathogen Bacillus anthracis causes severe, often fatal infections of the lungs, skin or intestines in humans and animals. Spores of the bacterium have already been used as a bio-terrorist weapon. The pathogen is particularly dangerous due to the toxin it releases, also known as anthrax. This consists of several sub-units. The so-called protective antigen (PA) binds to receptors on the cells and opens a gateway for two further subunits of the poison, the so-called edema factor (EF) and the so-called lethal factor (LF), which together ensure the destruction of the cell.

Receptors in the spinal cord

A team led by Nicole Yang from Harvard Medical School in Boston has now discovered a possible therapeutic benefit of the deadly poison. “We and others recently found that bacterial products can act on sensory neurons and modulate how we perceive pain during a pathogenic infection,” the researchers report. While the many bacterial products are more likely to promote pain, there are also some that are pain reliever. To find out which receptors are responsible for this, the researchers first analyzed the gene expression of nerve cells in the spinal cord.

“We discovered that the ANTXR2 receptor, which is highly specific for the anthrax toxin, is expressed in the pain-sensitive nerve cells of the spinal cord. In other parts of the central nervous system, however, it hardly occurs, ”report Yang and her team.
Building on this finding, they first tested the effect of the toxin on cell cultures with sensory nerve cells from humans and mice. “Our results show that the poison interferes with the signal transmission of the nerve cells,” said the scientists. The edema factor EF and the lethal factor LF only had an effect if they were combined with the “door opener” PA.

Effective against different types of pain

In the next step, Yang and her colleagues examined the effects on living mice. They either injected PA alone or in combination with EF or LF into the spinal cord. The result: “The administration of the edema toxin (PA + EF) significantly increased the threshold values ​​for mechanical and thermal sensitivity,” the researchers write. Mice treated with this combination reacted significantly less when their paws were squeezed, pricked with a needle or held on a hot or very cold plate. The effect lasted for several hours and was repeatable. A second injection two days later showed even stronger pain relieving effects. “This could be because the edema toxin ensures that more ANTXR2 receptors are formed,” the researchers suspect. In contrast, PA alone or in combination with LF had no pain relieving effects.

The researchers did not observe any side effects on the heart rate, body temperature or motor coordination of the animals. Only the tactile sensation was somewhat reduced. “This indicates that the edema toxin injected into the spinal cord has no major side effects on motor or sympathetic functions,” the researchers said. Further experiments showed that not only mechanical and thermal pain was suppressed, but also pain caused by inflammation or nerve damage. The treated nerve cells remained physiologically intact and were able to transmit pain again after the effects had subsided. The pain-relieving effect is apparently based on a blocked signal transmission and not on the destruction of nerve cells.

Vehicle for other drugs?

In addition, the team investigated the extent to which the protective antigen PA can also smuggle other substances into the nerve cells. PA has already been used in previous experiments to deliver cancer drugs into cells. Yang and her team were now using PA as a vehicle for other pain relievers, including botulinum toxin (Botox). This combination was also effective in blocking various types of pain in the treated mice. “This molecular platform, which uses a bacterial toxin to deliver substances into neurons and modulate their function, represents a new way of targeting pain-mediating neurons,” says Yang’s colleague Isaac Chiu.

So far, the research is still at the basic stage. However, the findings could provide new impulses for the development of pain therapies.