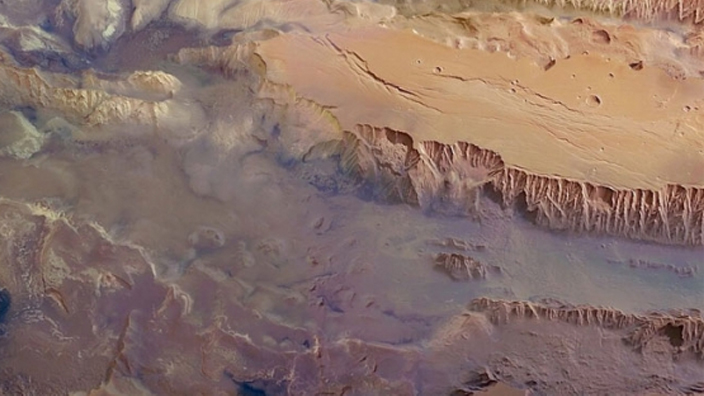 The presence of water was found in the Valles Marineris gorge on the surface of Mars. Valles Marineris is about ten times longer and five times deeper than the Grand Canyon in the United States.

During research as part of the ExoMars project, jointly carried out by the European Space Agency (ESA) and the Russian Space Agency (Roscosmos), a “significant amount” of water was discovered just below the Martian surface.

The presence of water was found in the Valles Marineris gorge on the surface of Mars. Valles Marineris is about ten times longer and five times deeper than the Grand Canyon in the United States.

The Trace Gas Orbiter satellite, which discovered the water, detected the presence of large amounts of hydrogen less than a meter from the surface of the canyon, said Alexey Malakhov of the Space Research Institute of the Russian Academy of Sciences. “This water could be in the form of ice or water that is chemically combined with other minerals in the soil. But other observations tell us that minerals in this part of Mars typically contain very small percentages of water, much less than those in these new memories. ” Observations. Overall, in our opinion, this water is more in the form of ice, ” says.

Summarizing Malakhov’s observations, “We noticed that a central part of Valles Marineris is filled with water. That’s a lot more water than we expected. “says. “This is very similar to the permafrost regions of the world, in which water ice is permanently under dry ground due to the constantly low temperatures.”

The discovery isn’t the first sign of water on Mars. The polar regions of Mars are covered in glaciers, and previous ESA missions have discovered potential water oases several kilometers below the surface of the earth.

However, the latest evidence shows that the water ESA is talking about is much more “usable”, making “Valles Marineris” an even more promising target for future manned exploration missions on the planet.

The area of ​​the newly discovered water-rich area is as large as the Netherlands, and the canyon system that offers hope of finding water on deep Mars overlaps the Candor Chaos Valleys.