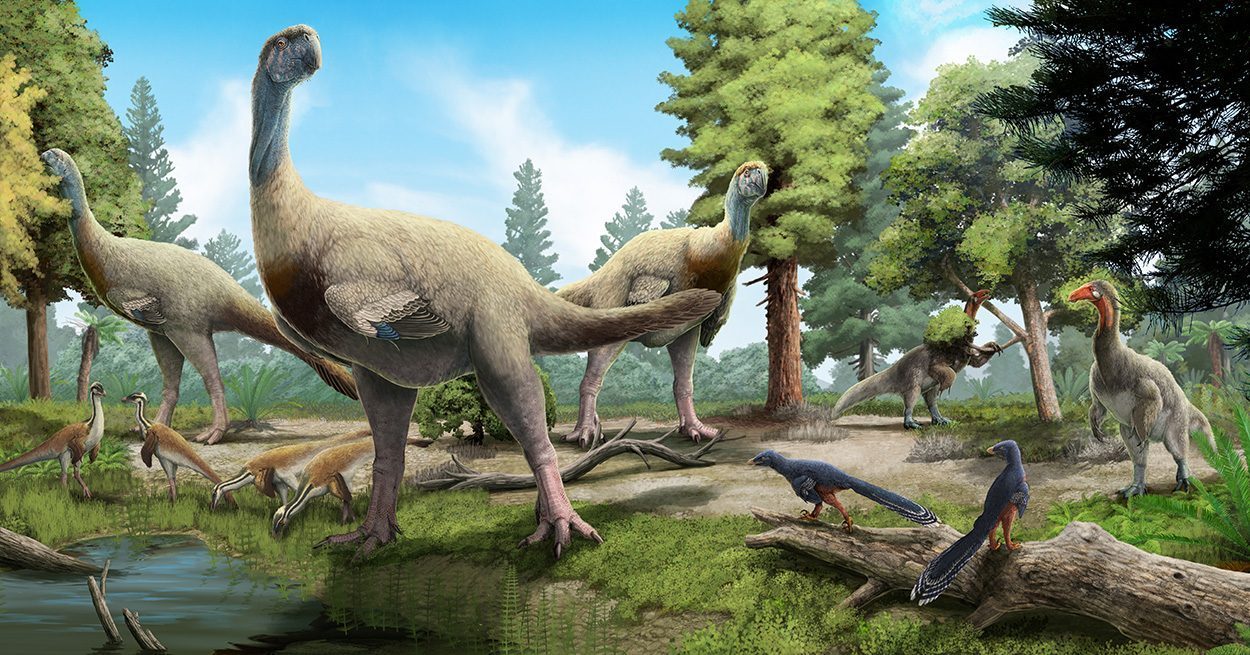 A study shows that dinosaurs from the theropod group developed increasingly stable jaws as they evolved. Carnivores and herbivores used different strategies, each adapted to their diet: in herbivores, the lower jaw bent downwards, in carnivores upwards. Both changes in shape increased the mechanical stability when biting. According to the researchers, evolutionary development is also reflected in the individual development of young theropods.

The theropod dinosaur group is known for bipedal walking carnivores such as the tyrannosaurus and the velociraptor. But while originally all representatives of the group ate meat, some developed into herbivores or omnivores in the course of evolution. In this way they were able to occupy new ecological niches and their biodiversity increased. The shape of your teeth, especially the lower jaw, provides important information about your diet. However, the exact changes in the course of evolution have so far not been adequately researched.

A team led by Waisum Ma from the University of Birmingham has now used computer simulations to investigate how the jaws of various carnivorous and herbivorous theropods have developed over the course of evolution and how they have adapted to the respective diet. To do this, they created digital models of the lower jaws of 43 different theropod species and, using biomechanical computer simulations, analyzed the mechanical stress that acted on the jaw when the dinosaur bit shut.

“Theropoda dinosaurs have undergone extreme changes in their diet during their 165 million year evolutionary history,” explains Ma. “They started out as carnivores and later evolved into specialized carnivores, omnivores, and herbivores. Investigating how their diets have changed is the key to understanding the dietary changes in other vertebrates as well. “

The analyzes showed that, in both carnivores and herbivores, species that emerged later had stronger jaws than their ancestors. The back of the jaw in particular became thicker in the course of evolution. In the case of herbivores, the jaw also arched downwards, which additionally increased the mechanical stability and thus compensated for the high loads that arise when parts of the plant are torn off. “These changes made it possible for herbivorous theropods to use plant materials that were not available for earlier theropods that were not adapted for human consumption,” the researchers explain.

For carnivores, on the other hand, it is not enough if they can bite hard. They also have to be quick so that their prey does not escape them. “A downward-pointing lower jaw might not be a good way to grab and hold the prey,” the researchers write. Although the downward-facing dentition offered the best mechanical relief, the carnivorous dinosaurs therefore developed a different adaptation: “Compared to the earliest carnivorous theropods, later tyrannosauroids and their relatives developed an upward-facing dentition with a wavy chewing surface, similar to that of modern predators how crocodiles resembles, ”report Ma and his colleagues. The upward-curved shape of the late carnivores is less stable than the downward-curved shape of the herbivore, but still offers mechanical advantages compared to the rather elongated, narrow mandibles of their ancestors.

“It is fascinating to see how the theropod dinosaurs developed different strategies to increase jaw stability depending on their diet. This was achieved through bone remodeling – a mechanism in which bone is deposited in the areas of the jaw that are exposed to high stresses when eating, ”says Ma’s colleague Stephan Lautenschlager.

Using the jaws of young theropods, the researchers also found that the jaws also strengthen in the course of individual development. “Our results show that the lower jaws of Tyrannosaurus and Tarbosaurus become more resistant to stress caused by bites as they develop from juvenile to adult,” they report. “The similarity of the jaw reinforcement over the course of growth and over time suggests that the developmental patterns of the juvenile dinosaurs ultimately influenced the evolution of the entire group,” says Lautenschlager. “This likely favored the jaw development of the theropod dinosaurs and their overall success for 150 million years.”