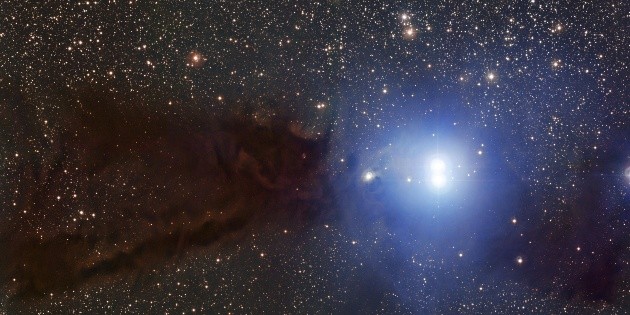 An investigation of the international initiative Dark Energy Survey (DES) has confirmed the presence of a super void, an extremely large region with a lower than average density of matter, in the constellation Eridanus.

This study could provide new clues about the nature of dark energy, informs in a statement the Institute of Astrophysics of the Spanish Canary Islands (IAC), which is participating in the research, published today by the journal “Monthly Notices of the Royal Astronomical Society“.

The work, led by the IAC researcher András Kovács, has confirmed the presence of a large region of low density of matter or super vacuum in the constellation Eridanus. This region is also the location of the so-called “cold spot”, one of the large-scale anomalies of the Cosmic Microwave Background (CMB, in its acronym in English), a type of fossil radiation from the origins of the Universe.

This anomaly corresponds to a structure located above the sky of the ecliptic southern hemisphere, with a temperature that is colder than average. However, a cold region as large as the “cold spot” seems “very unlikely” according to the standard cosmological model.

Therefore, the DES team hypothesized that a super vacuum could explain, at least in part, why this spot is significantly larger and cooler than expected. Scientists further believe that This gigantic region could be used as a unique laboratory to learn about dark energy.

From an energy point of view, the IAC compares a super vacuum to a hill that must be scaled from the perspective of the CMB’s photons on their way to telescopes on Earth. To pass through this region of lower density, these photons must invest energy.

However, during their passage, these photons undergo the effect of dark energy, responsible for the cosmic expansion, explains the IAC. This energy acts as a repulsive force, opposite to gravity., so that it slows down the rate of formation of the larger cosmic structures and smooths them out.

Therefore, at the exit of a super vacuum, the CMB photons, instead of recovering the same energy invested in climbing the hill, lose a part of it, since the dark energy softens the descent. This net loss of energy is equivalent to a slight cooling of the temperatures of the CMB photons passing through the super voids.

Thus, by studying this effect in detail, cosmologists can infer properties of dark energy. In the case of the CMB “cold spot”, studies of previous galaxies had already found evidence to support this hypothesis, but the DES data provides a new observable clue.

The reconstructed map of the distribution of dark matter facilitates “Statistically Strong” Evidence for Lack of Matter about 1.8 billion light-years away in Eridanus, making this super void “one of the largest structures in our cosmic neighborhood.”