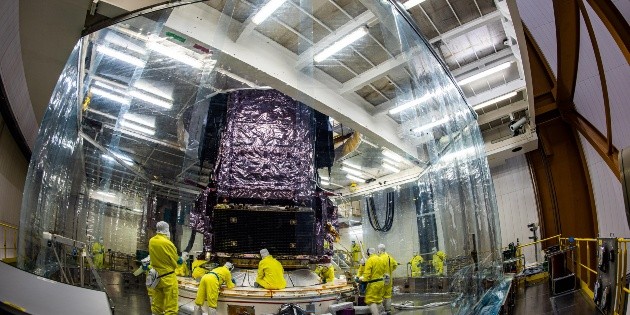 By the end of this month, three international space agencies intend to launch the James Webb telescope, this telescope has the mission of observing the life of the galaxy, for example the origin of stars or possible life on other planets. An astrophysicist from the European space agency (ESA) gave some details of the mission that she shares with NASA, this mission could revolutionize the knowledge we have about space.

The astronomical device that was scheduled to be launched this December 22, Since 2019 he has had three delays and had problems again, since yesterday NASA reported that it would not be possible to send it on the date provided, due to a communication problem between the telescope and the launch vehicle. the Ariane 5 rocket.

“There is a communication problem between the telescope and the launch system. We are working on that. The date will not be before December 24.”
-Daniel Neuenschwander, ESA Director of Space Transportations pic.twitter.com/e6JYtc76YH


What we should know according to the experts:

The astrophysicist, Macarena García Marín, in charge of the calibration of one of the four scientific instruments of the telescope, clarified some doubts:

What is the James Webb Telescope?

The James Webb Telescope is a new device that has an infrared spectrum to photograph old astral objects and track clouds of stardust, This innovation will help obtain images that the human eye and the Hubble telescope have not been able to capture.

“Webb” has four scientific instruments that will generate the taking of photographs of the cosmos and will help to study the chemical and physical properties of the discovered objects. The observatory will be placed in orbit at a distance of 1.5 million kilometers (km) from Earth and will revolve around the Sun.

What is there to know about the James Webb Telescope?

In an interview with the Spanish portal, Macarena García commented that the reason for the delay in launching the “Webb” -which had been designated to December 18 and postponed to December 22- was due to the fact that one of the telescope’s “clamps” was fractured. when placed on a vertical platform, which caused vibrations throughout the space apparatus, without causing serious damage.

The scientist stated that during the four days of postponement, the necessary tests will be carried out to verify that the systems do not fail again, and that it is ready for take off.

What are the differences between the James Webb telescope and Hubble?

García Marín explained that the new infrared telescope, which they premeditate has a useful life of 10 years thanks to its characteristics, will be able to photograph with greater clarity, even see beyond the clouds of dust generated by the birth of stars, which represents an advantage over the Hubble telescope, which captured ancient galaxies, for more than 30 years. However, its optical system did not allow it to pass through phenomena of this type, which makes the difference between optical technology (Hubble) and infrared innovation (James Webb).

“There is a lot of activity that you cannot see at the optician. One of the first advantages is that with infrared you can see behind the dust because infrared radiation heats up the dust and it sends it back, and then it basically becomes transparent, “said García Marín.

Another advantage is that James Webb, whose name was given in honor of the NASA administrator from 1961 to 1968, will be able to observe cooler objects such as distant planets and galaxies that are around 13.5 billion years old.

“Hubble went as far as 12.5 billion years … The Webb is going to go much further back, to a time in the universe when the first galaxies and stars were forming, and which we have never seen before. In other words, we are going to explore, let’s say, unknown territory, “said García Marín.

The investment that the Webb telescope will have?

According to SINC, this telescope is the most expensive in space history; the observatory has an approximate budget of 10 billion dollars, will reveal new information about the universe; One of the missions will be the search for exoplanets with a technique based on the detection of electromagnetic radioactivity emitted by planets in other solar systems.

“Basically, you have a star, a planet that revolves around the star, so what you do is observe the transit of the planet, with which you obtain spectral data, that is, the light is scattered like a rainbow and you have the information in detail of all the biosignatures or, let’s say, the fingerprints of the planet, “he explained.

Although the four instruments that make up the artifact will observe the exoplanets, the MIRI, which is in charge of García Marín, will use spectroscopy without slit: “which uses a prism to scatter light.”

It will be complemented by the Hubble Observatory

The new observatory does not seek to replace Hubble, but they will be complementing each other, since The new device uses the ultraviolet and infrared spectrum detected by the Hubble ObservatoryIn the case of the Webb observatory, the infrared spectrum will provide more advanced and specific knowledge.

“Webb is going to detect much fainter objects, much further back in time, and observe them with much better spatial resolution and better detail. It is going to complement Hubble, but taking it much further, many steps further, which is what you want when you launch something new, “said the astrophysicist.