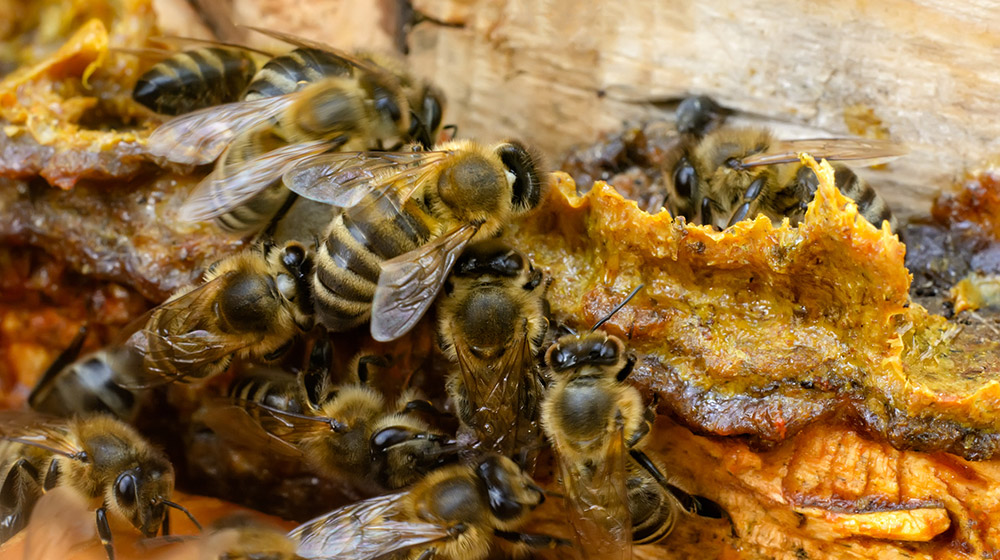 Natural protection against parasites: The propolis resin mixture produced by honey bees is also effective against the bee parasite Varroa destructor. The resin increases the mortality of the mites and is also used by infested bees as a kind of self-medication. Although propolis can only partially mitigate the harmful effects of the mite infestation, the results could help to better protect bee colonies from the parasite in the future.

The bee parasite Varroa destructor endangers the health of entire bee colonies. The mite multiplies in the bees’ brood cells, so that newly hatched workers already carry the pest with them – which significantly reduces their survival. In addition, the Varroa mite transmits diseases such as the deadly wing deformation virus BWV. Earlier studies have already shown that infested bee colonies protect themselves against the parasite through social measures such as social distancing.

A team led by Michelina Pusceddu from the University of Sassari in Italy has now proven that the bees’ defense against parasites goes even further. Apparently they use propolis, an antimicrobial mixture of plant components, to counteract the pest. This consists of various herbal compounds, some of which have an antimicrobial, antiviral and anti-inflammatory effect.

“Honey bees use propolis that they collect from plants to line the inner walls of their nests,” the researchers explain. “We performed chemical analyzes and bioassays in the laboratory to test whether honeybees also use propolis as a social drug against their most important ectoparasite: Varroa destructor.”

An earlier study had already shown that in colonies of bees infested with Varroa destructor, female workers were increasingly collecting plant resins for propolis. It was also known that propolis helps against various other bee diseases and parasites. What influence the substance has on the most important bee pest, Varroa destructor, has been unclear so far.

First, Pusceddu and her colleagues used chemical analyzes to prove that the brood cells were actually coated with propolis on the inside. In order to test the influence on the Varroa mite, the researchers then created artificial honeycombs, which they partly coated with propolis and partly left untreated. They bred bee larvae in all of the combs, exposing some to Varroa.

The result: “Propolis significantly increased the mortality of Varroa mites, which was up to 20 percent in the treated cells,” said the researchers. “In addition, propolis significantly reduced the percentage of surviving mites that produced offspring in the brood cells by 44 percent.” The researchers conclude that propolis is able to reduce the survival and reproduction of the mites.

Not all damage prevented

However, bees from Varroa-infected brood cells were still smaller and lighter than their non-infected conspecifics – regardless of whether the honeycomb had been treated with propolis or not. “Propolis does not seem to be able to compensate for the negative, direct effects of the mite infestation on the developing bees,” the researchers conclude.

Propolis, on the other hand, was able to at least mitigate indirect damage from mite infestation: while the bees from untreated, mite-infested honeycombs often had crippled wings – a clear sign that they were infected with the wing deformation virus transmitted by Varroa – this was the case with bees made from honeycombs that had been treated with propolis were the case significantly less often. This suggests that propolis may decrease the mite-induced virus replication by interfering with the mites’ survival and reproduction, ”the researchers said.

Since some honey is also stored in propolis-coated cells, Pusceddu and her colleagues also investigated to what extent the bees prefer food with or without propolis, depending on their health. In fact, bees infested with mites preferred to consume food fortified with propolis compared to healthy conspecifics.

“This indicates that the bees perceive some bioactive components of the food and prefer to eat,” the authors write. “Overall, these results clearly show the therapeutic effects of propolis on mite-infested bees and significantly deepen our understanding of the process of social medication in honey bees.”

The findings could also have an impact on beekeeping. “So far, beekeepers have rated the deposition of propolis in the beehive negatively, as the sticky material made handling the frames with the honeycombs more difficult,” the researchers explain. “Our study underscores the importance of this substance for the health of the bee colonies.” It might even make sense to promote the storage of propolis in the beehive in order to support the health of honey bees. (Proceedings of the Royal Society B: Biological Sciences, 2021, doi: 10.1098 / rspb.2021.2101)

Quelle: Proceedings of the Royal Society B